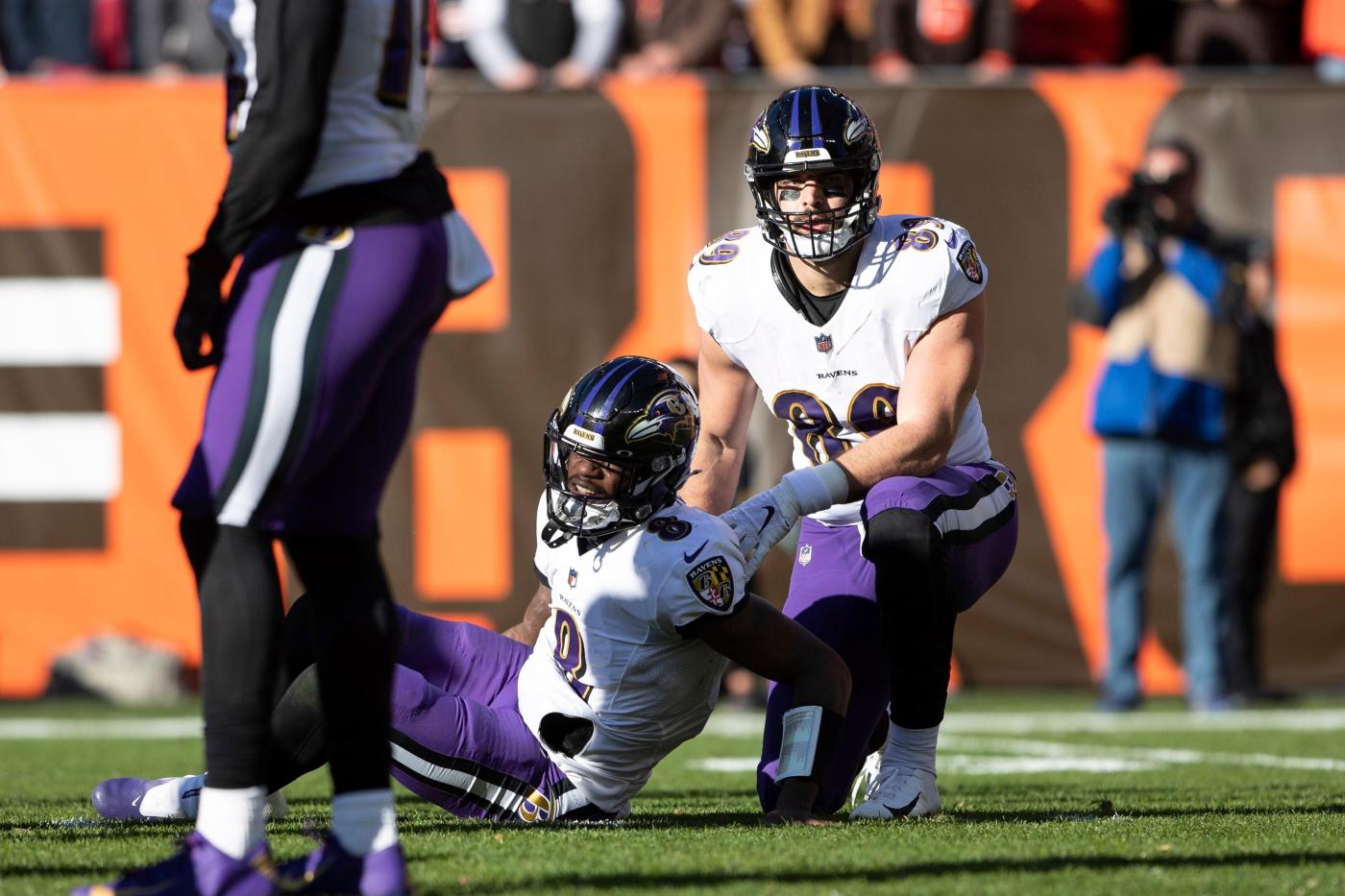 Several Ravens lingered on the benches at M&T Bank Stadium, ignoring the chilly rain as they held on to the last moments of a season in which they had fought and fought to a dispiriting end.

The scoreboards above them told the story: Steelers 16, Ravens 13 — their sixth loss in a row, five of those by razor-thin margins. Again, they had not come up with the pinpoint pass in the end zone or the timely defensive stand that might have made the difference.

“It hurts a lot knowing that you had everything at your fingertips,” said linebacker Patrick Queen, one of the starters left standing at the end of an 18-week march defined by attrition.

After the Ravens defeated the Cleveland Browns on Nov. 28, their record stood at 8-3, they held the No. 1 seed in the AFC and they had roughly a 90% chance to make the playoffs, according to the analytics website FiveThirtyEight.

Their performance was in line with rosy preseason projections that labeled them a Super Bowl contender.

Over the next six weeks, they fell apart, suffering through the longest losing streak of John Harbaugh’s 14-year tenure as head coach and falling short of the playoffs for the first time since Lamar Jackson became their starting quarterback in 2018. Their 8-9 record marked their first losing season since going 5-11 in 2015 and only their second under Harbaugh, whose tenure as head coach is the fourth-longest in the NFL.

Several factors — injuries to star players, a significant coronavirus outbreak, stagnant offense, high-risk coaching decisions that did not pan out — contributed to their unraveling. They vowed to keep fighting as one excruciatingly close loss piled on top of another, but they never steered out of this tailspin.

As they surveyed the wreckage of their once-promising season, players and coaches seemed perplexed and bummed out by what they had endured.

“We could probably write a book about it,” said offensive coordinator Greg Roman, who suggested the team’s trail of misfortunes could have sprung from the mind of “Curb Your Enthusiasm” creator Larry David.

“It’s just so rare — just when you put yourself in position and then, literally, you go through so much hardship and different things that [makes it] just hard to win a ballgame,” 14-year veteran defensive lineman Calais Campbell said. “You do everything you can. We were preparing the same way in those first games when we put ourselves in position, and we were the No. 1 seed and [had] the best record in football.”

Fans who showed up for the season finale on a gray, damp afternoon offered measured assessments of the franchise’s state. They were disappointed, and hoped to see a younger roster and more creative play-calling next fall. But many said the Ravens squeezed as much as possible from an injury-wrecked year.

“We didn’t do what we were expected to,” said Darrin Cox, a 26-year season ticket holder from Rising Sun in Cecil County. “We were all expecting to be in the playoffs, even have a chance at the Super Bowl.”

While he said he’d seen “a lot of bad play calls” by the team, he added: “I don’t want to blame one thing; the injuries hurt us the worst.”

Pat Philip of Rosedale, who has held season tickets since 2003, said he hears plenty of negativity toward the team, but now is not the time, given all the Ravens endured.

“It’s injuries; the coaches have done a hell of a job with what we have out on the field,” he said. “I think if we’d had all our players, we would have been pretty hard to stop.”

“We’ve lost four games by a total of five points,” said Allen Schiff of Pikesville as he scooped burgers and hot dogs from his grill outside M&T Bank Stadium before the loss to the Steelers. “How does a team rebound from Marcus Peters being out, Marlon Humphrey being out, J.K. Dobbins being out, Lamar Jackson being out? It goes on and on.”

Schiff, a season ticket holder since 1996, said “there are going to have to be significant changes.” But he trusts the top decision-makers — Harbaugh, general manager Eric DeCosta and owner Steve Bisciotti.

The Ravens’ descent was unusual.

They had a 91% chance to make the postseason after they beat the Browns, said Aaron Schatz, founder of Football Outsiders, an analytics website.

“It’s not common for a team at 91% to miss the playoffs; it’s also not common for an 8-3 team to go on a [six-game] losing streak,” Schatz said. “What you saw with the Ravens was them hitting the downside of every range of possibilities. They just kind of hit a point where they ran out of guys.”

There were danger signs lurking beneath the surface of the team’s impressive start.

They had lost some of their most important players before the losing streak started, including cornerback Peters, running backs Dobbins and Gus Edwards, left tackle Ronnie Stanley and safety DeShon Elliott.

And the Ravens weren’t winning most of their games in commanding fashion. They needed a 66-yard field goal from Justin Tucker to beat the lowly Detroit Lions and nerve-jangling, Jackson-led comebacks to knock off the Vikings and Indianapolis Colts. Jackson’s backup, Tyler Huntley, stepped in to pull them out of the fire with a late rally against the mediocre Chicago Bears.

Amid all these tight games, the Ravens lost steam on offense. They scored just 10 points in an upset loss to the Dolphins and 16 apiece in wins over the Bears and Browns.

Their troubles accelerated from there.

They lost by one point in Pittsburgh on Dec. 5 after Harbaugh decided to go for a 2-point conversion in the final seconds and Jackson’s pass trickled off the outstretched hands of tight end Mark Andrews. Cornerback Marlon Humphrey tore his pectoral muscle in the loss, ending his season.

Next, they lost by two points in Cleveland and watched Jackson hobble off the field with an ankle injury that ultimately kept him out the rest of the season.

They fought gamely with Huntley at quarterback against the NFC-leading Green Bay Packers, but fell one point short after Harbaugh again called for a 2-point attempt that failed in the final minute.

Then, COVID-19 robbed them of their remaining roster depth. They played in Cincinnati on Dec. 26 with third-string quarterback Josh Johnson and a hastily assembled defense. The Bengals spanked them 41-21.

The Ravens tried to rebound one more time, carrying a lead into the final minute against the favored Los Angeles Rams. But they could not muster a defensive stop on fourth down and lost by one point for the third time in five games.

Every one of those missed opportunities lingered in the pits of their stomachs as they contemplated the end of the ride.

“It came down to us not finishing; maybe we didn’t finish a play the right way, didn’t make a tackle at the right time, and the other team made that one more play,” said linebacker Josh Bynes, an 11-year veteran. “It definitely bothers you, because the expectation level here is tremendous.”

As they look forward to the 2022 season, Harbaugh, DeCosta and Bisciotti will have to decide if this collapse was an aberration or a sign that they need to make significant changes to their roster and coaching staff. Though players such as Stanley, Humphrey and Andrews are locked in as building blocks, the Ravens will need to freshen up their defense and look for a more sustainable mix on their offensive line. How aggressively will they pursue an extension with Jackson, whose performance has been uneven since his 2019 Most Valuable Player season? Will Harbaugh look for new assistants to give a jolt to the offense, which went stale in the second half of this season?

The head coach never stopped expressing pride in his team’s resilience. After the loss to the Steelers, he talked to the players about how to draw lessons from this trying time. “There’s going to be a point in time in your life when your kids go through some tough times … and they’re going to ask you why and what’s going on and how to handle it,” he said. “You’ll be able to tell them this story.”

Jackson, the most important player in the organization, echoed Harbaugh’s thoughts, even as he described the anguish of sitting out the last four games.

“We still managed to have hope, to have fight at the end of the season,” he said. “We never batted an eye, never shied away from anybody, no matter what the record was. We lost close games. It says a lot about our guys, what we have here moving forward. Hopefully, this offseason, we’re going to get right and have our guys come back and we’re going to have the season we’re supposed to have.”