MARKET REPORT: Stock markets end another rocky week on a high in boost for investors reeling from recent turmoil

By John Abiona For The Daily Mail

Stock markets ended another rocky week on a high in a boost for investors reeling from the recent turmoil in global finance.

The rally was mirrored in Europe and on Wall Street and was a welcome relief for investors with pensions, ISAs and other investments amid turmoil on global markets. 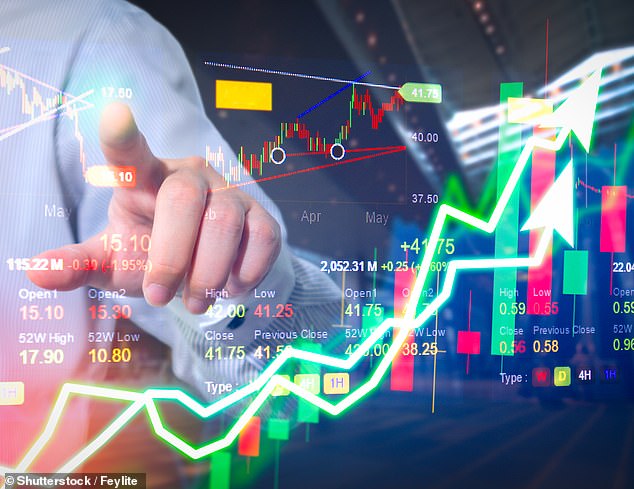 Share prices have tumbled in recent weeks as central banks around the world, including in the US and the UK, raise interest rates in a desperate bid to get runaway inflation under control.

But there are fears the global economy is now slowing to such an extent that further rate rises will not be as aggressive as previously thought.

While the slowdown in the economy does not bode well for company profits and, therefore, share prices, hopes that rate rises may be tempered were enough to offer stock markets some respite.

Michael Hewson, analyst at CMC Markets, said: ‘After a pretty poor couple of days, European markets have seen a decent rebound, with the FTSE 100 looking set to post its first positive week after three weeks of declines.’

He said that while ‘recession fears are rising’, shares had benefited on hopes that ‘an economic slowdown might prevent rates going up as much as originally thought’.

It has almost returned to full operations and enjoyed its best quarterly booking volumes since the pandemic began. Revenue in the three months to the end of May climbed to £2billion from £41million a year earlier but fell short of analysts’ expectations of £2.3billion.

But it was a different story for another of Britain’s biggest travel companies. Investors in Tui suffered a fresh setback as its chief executive said he will step down after nearly ten years at the helm.

Friedrich Joussen has led it since 2013 and will be replaced by chief financial officer Sebastian Ebel in October. The firm’s shares fell 3.3 per cent, or 5.85p, to 146.83p.

Joussen steered Tui through the pandemic but its recovery remains fragile and the stock is down around 85 per cent since its 2018 peak.

Tui has repaid some of the near- £4.2billion cash support it was given by the German government to help keep it afloat.

But the holiday giant has endured a torrid time of late, causing misery to families after cancelling hundreds of flights.

Joussen, the chief executive of phone company Vodafone Germany from 2005 to 2012, before he joined Tui said: ‘When the pandemic in spring 2020 turned us into a company without a business virtually overnight, all our attention was focused on one goal: rescuing Tui.

‘Under new management, Tui is now starting the next chapter.’

In another blow to the sector, Deutsche Bank downgraded its outlook for Easyjet, Wizz Air and IAG, the company that owns British Airways.

Easyjet’s target price was lowered to 490p from 570p, and its shares fell 0.9 per cent, or 3.5p, to 394.9p. Earlier this week the budget carrier slashed the number of flights it had planned for the summer.