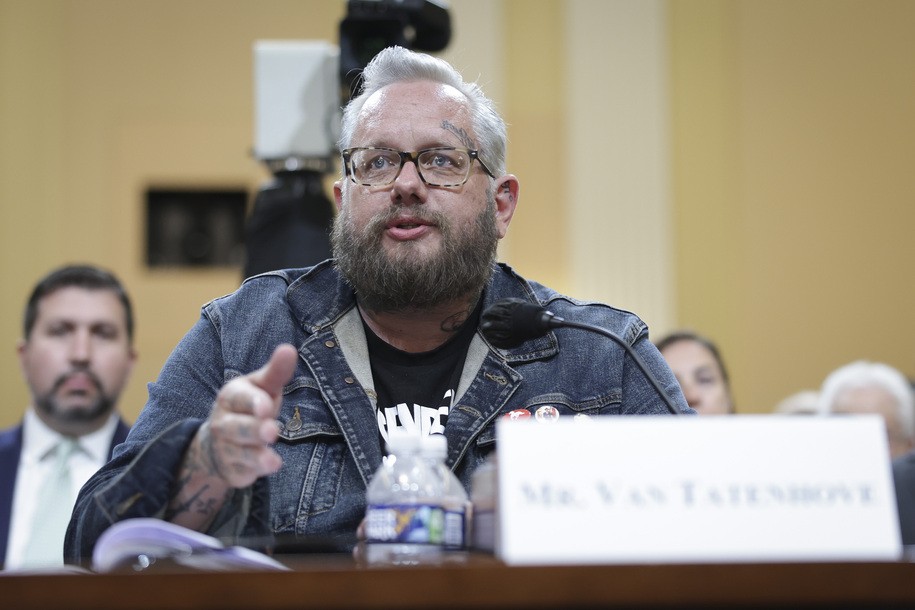 On Tuesday, former high-ranking Oath Keeper Jason Van Tatenhove testified during the latest Jan. 6 committee hearing. Van Tatenhove left the alleged domestic terrorist organization in 2016, saying that while he had found its anti-government leanings appealing at first, he then watched the members become far too right-wing for his comfort, saying that the “straw that broke the camel’s back” was when he ran into a couple of Oath Keepers having a casual Holocaust denial conversation.

One of the first things that people online noticed during Van Tatenhove’s testimony was his sartorial style. Under a jean jacket, Tatenhove was wearing a T-shirt featuring the legendary west coast punk band Descendents. Descendents are best known as a pioneer in pop punk music, and have always used a character named “Milo” (a caricature drawing of lead singer Milo Aukerman) in their designs. The shirt Van Tatenhove wore included the cover art for Descendents’ 1996 album Everything Sucks.

Descendents fans quickly jumped on how surreal this made Van Tatenhove’s testimony. Comedian Chris Gethard tweeted, “Am I hallucinating that this Oath Keeper testifying before congress is wearing a Descendents t-shirt? I just had hernia surgery so this may be the painkillers.” Many made jokes that played on the band’s first 1982 album, Milo Goes to College. Then the band itself released a statement.

RELATED STORY: The ‘straw that broke the camel’s back’: Former Oath Keeper testifies