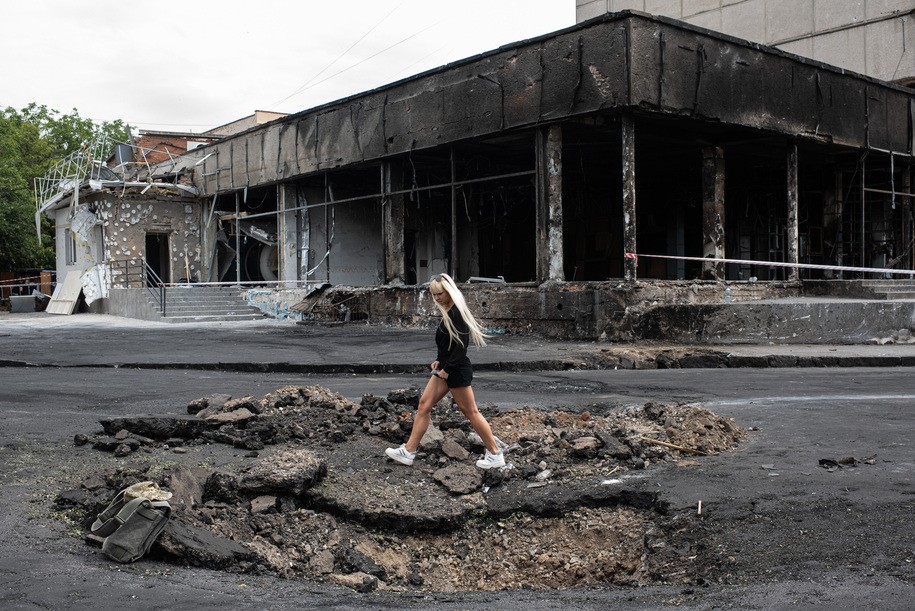 A young woman walks past damage made by a Russian rocket in Vinnytsia, Ukraine, July 15, 2022.

By now I think everyone is tired of looking at maps of the Kherson area in which few things seem to change from day to day. So you may be excited to see that the map has changed today. Until you see that none of those changes is for the good. 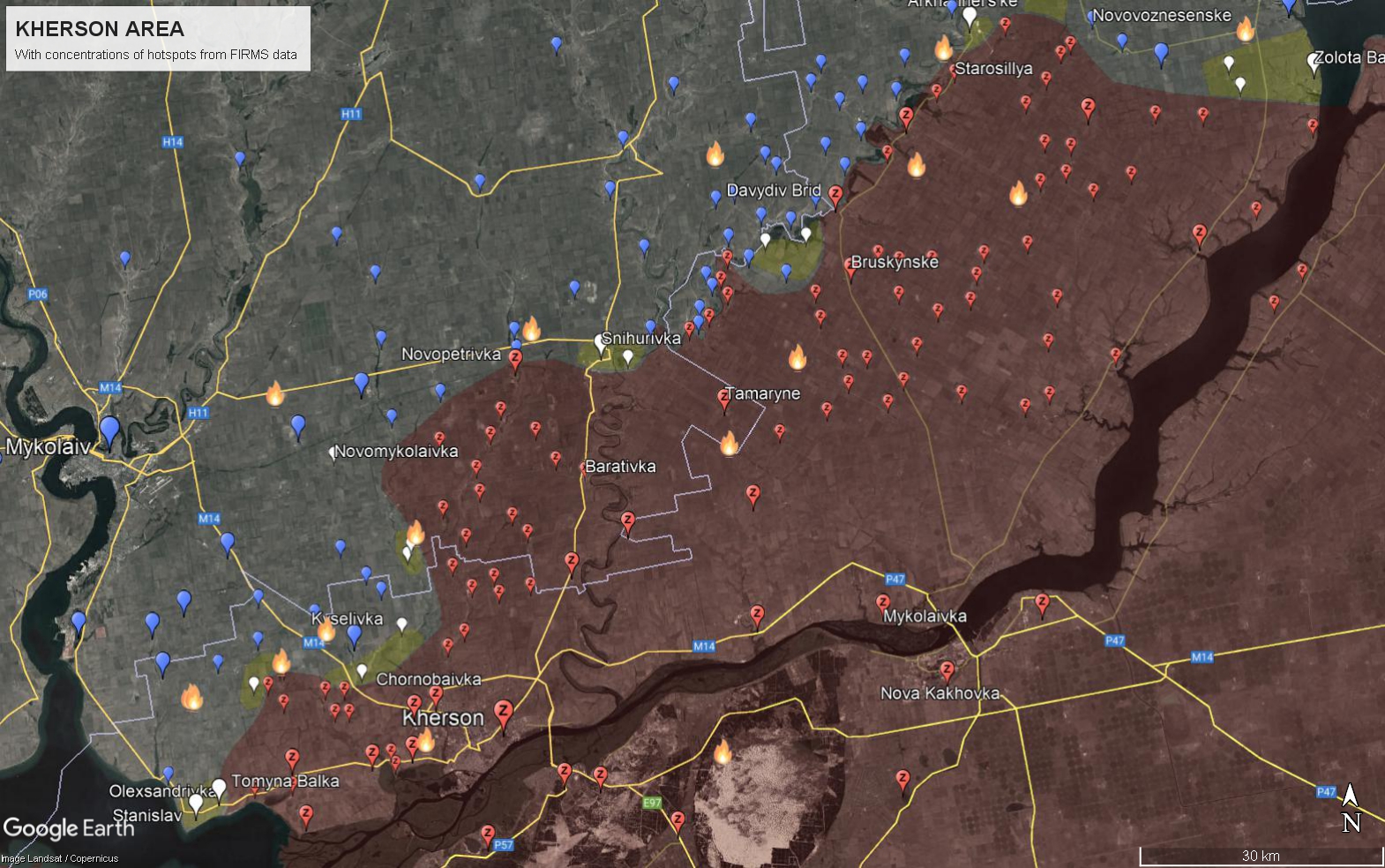 Kherson area update reverts much of the ‘disputed’ area to Russian control.

It’s not that Russia has conducted a major offensive, or even that a number of past calls turned out to be wrong. Mostly the changes in the map are the result of area that has been marked as “in dispute” being reverted back to areas of Russian control.

We’re around three weeks into this latest round of “Ukraine launches a counteroffensive in Kherson oblast!” With every Ukrainian victory, and especially early in this action, there was a tendency to immediately assume that Ukraine liberating one village or town automatically put every neighboring location into a gray zone. After all, Ukraine was driving for Kherson! If one town gets freed, it’s surely and indicator that the next few down the road are going to go like dominoes. Right?

But as any signs of obvious progress have slowed, the folks associated with @OSINTechnical, and a host of interested individuals (like this one, or this one, or this one) who have ridiculous skills at using videos and individual images to put a geolocation on posts, have had time to go through what’s being seen on both Twitter and Telegram. Those results suggests that Russian forces are still comfortably in place in a number of areas that were marked as disputed. That’s especially true in that bulge of Russian-controlled territory that juts out between Kyselivka and Snihurivka. There are even videos of Russian troops operating all the way over at Novomykolaivka. But it’s unclear whether that should really be inside the zone of Russian control, or just represents Russian forces ranging around. One thing to consider is that few of these towns or villages have anything like an actual occupying force. There is a lot of open space and empty fields in this area, and people drive around between villages that are all but empty. So video-from-area doesn’t necessarily mean in-control-of-area. But the wide range of Russian forces here certainly suggests that Ukraine is a lot further from that next major highway leading to Kherson than it may have seemed a few days ago.

Also on the map today are some major hotspots from NASA’s FIRMS data. This is not by any means every hotspot in the area. Instead, it represents those points that both represent clusters of activity, and those that seem to be definitely related to artillery or rocket fire. Again, I’ve leaned on some of the same amateur and professional OSINT resources in interpreting what’s real, what’s a field of grain on fire, and what probably represents nothing at all.

In general, the hot spots seem to be of two types: First, there is a whole line of activity along what likely represents the position of Ukrainian artillery and forces facing off with Russian troops along the line south of Kyselivka. This makes sense, as this area contains by far the highest level of Russian chatter on Telegram and other platforms. Russian forces are heavily concentrated in the area immediately west of Kherson. Two more battalion tactical groups were reportedly added to the area in the last two days. Everyone on both sides understands that this is the short route into the city, and most of the heavy action is here.

The other areas of Russian fire are about where you would expect them. Everywhere that Ukrainian forces are pressing the line, Russia is firing into the backfield, searching out artillery, supply lines, command and control … that stuff. None of this particularly looks like Russia softening up the lines for their own offensive. It’s just what’s been going on for months now. Holding ground.

Then there’s a line of Ukrainian fire that ranges further back into Russian controlled territory. There are around 15-25 kilometres back from the edge of the red zone, and at first glance they don’t seem to be targeting anything. A close look reveals a field. And a field. And another field. And a … you guessed it.

These are likely counterbattery fire. Those clusters of Russian fire close to the front lines are probably originating from guns placed back here. Ukrainian guns are searching for them. In some cases, Ukraine may not have great satellite or drone-supported intelligence on the position of those Russian guns, because at least a couple of these locations show a grid of hotspots. Like artillery working its way through a field, trying to cover all the ground.

None of these locations are likely to be HIMARS. They’re not even necessarily M777s, especially not with any kind of extended or GPS-targeted shell. It’s just guns battering away at each other. The one thing in the area that may well be a HIMARS hit is that hotspot on the east side of the river, about halfway between Kherson and Nova Kakhovka. It was in Nova Kakhovka that HIMARS lit up a massive ammunition depot, generating a spectacular explosion that was still cooking off shells two days later. It seems entirely possible that this could be another such target though, thankfully, this one is not in the middle of a town. There are also reports of HIMARS being deployed against “anti-air and troop concentrations near Kherson.” That may be true, but it’s not obvious in the FIRMS data.

I wish there were better news. I’d love to report that all that “Ukraine has Kherson surrounded!” chatter on Wednesday night was more than wishful thinking.

However, when looking at those Russian videos, there’s a great caveat: Never believe what they’re saying. Even if they’re showing the signs of the towns they’re purporting to be in.

I will reiterate once again, Russian territorial claims are untrustworthy so you need to either categorically ignore them or heavily caveat them. https://t.co/wStiZT2vTN

One thing that the guys doing the geolocations have seen almost continually, and are seeing now over and over east of Siversk, is Russian forces claiming to be several towns and dozens of kilometers from where the video is actually shot. It can even include Russian forces all located in the same place, pretending to be in multiple towns.

Russia’s actual advances in the east seem to be back to the crawling stage. Meanwhile, Russia continues its campaign of the one thing it does so well: maximizing deaths among civilians.

Yesterday’s massacre in Vinnytsia wasn’t enough for them. pic.twitter.com/RFPW3HHM0P

😂Remember all those awesome Ukrainian DIY combat drones? Russians thought they could be like Ukrainians.
But it turns out they are still Russian. pic.twitter.com/nH7XCAwL9D

Timo Werner arrives in Leipzig ahead of his medical

Timo Werner arrives in Leipzig ahead of his medical