Microsoft has reached a new milestone in its effort to ditch diesel in favor of cleaner energy at its data centers. The company announced today that it successfully tested a hydrogen fuel cell system powerful enough to replace a traditional diesel-powered backup generator at a large data center.

As part of its plans to tackle climate change, Microsoft wants to completely quit using diesel as fuel for its backup power systems by 2030. To keep data centers running 24/7, regardless of power outages, each center is equipped with batteries that temporarily kick in until backup generators are fired up.

For now, those generators run on diesel, releasing air pollutants and greenhouse gas emissions. Hydrogen fuel cells, in contrast, combine hydrogen and oxygen to generate electricity and release heat and water instead of pollution. Big batteries can also run on clean energy but generally don’t have the capacity to power a data center for more than a few hours at best.

That’s why Microsoft is pretty excited about hydrogen as a fuel and the milestone it just reached: designing and testing a three-megawatt hydrogen fuel cell system that can power around 10,000 computer servers at a data center (or 600 homes, for comparison).

“What we just witnessed was, for the datacenter industry, a moon landing moment,” Sean James, Microsoft director of data center research, said in a blog post today.

It’s been a long journey to get to this point, and there’s still a long road ahead before all of the backup generators at Microsoft data centers can be pollution-free. Microsoft started tinkering around with fuel cell technology in 2013. But, at the time, the fuel cells it was working with still relied on natural gas. 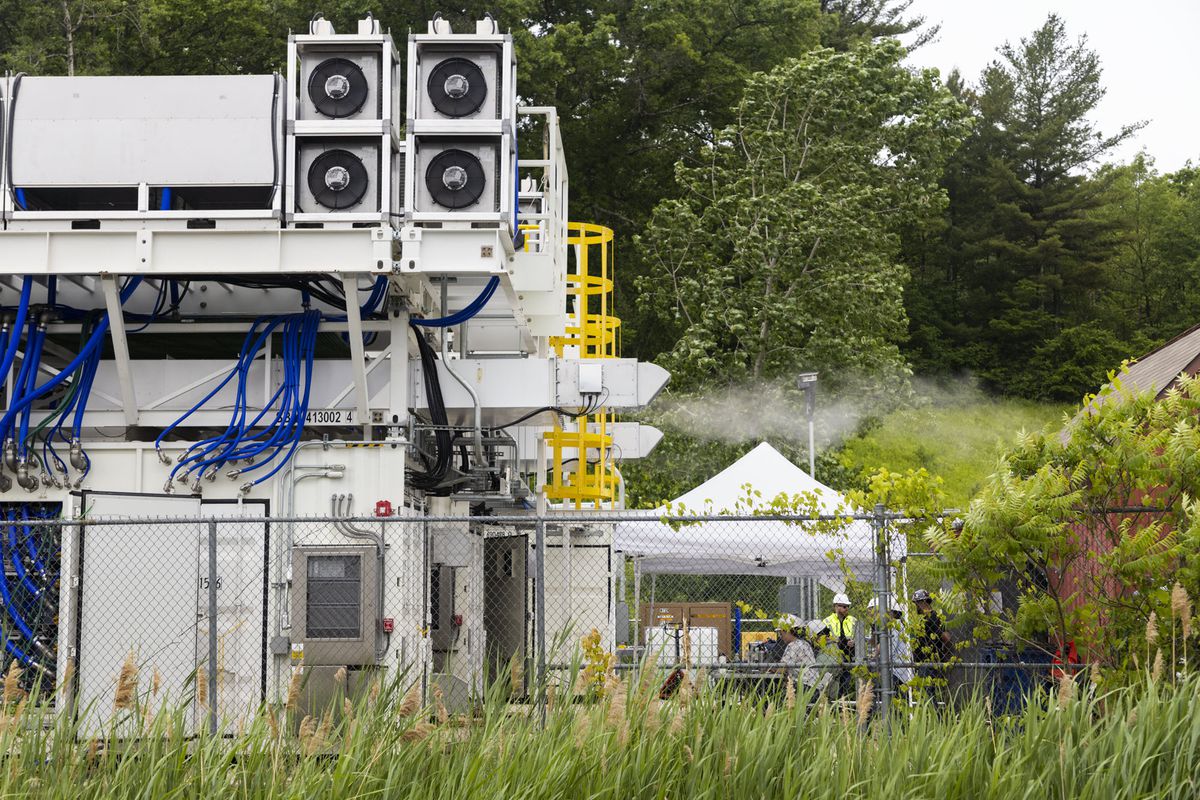 Steam is seen venting from pipes at the top of the shipping containers during a test of the three-megawatt fuel cell system. PEM fuel cells combine hydrogen and oxygen in a chemical reaction that generates electricity, heat, and water. Image: Microsoft / John Brecher

By 2018, the company had turned its attention to proton exchange membrane (PEM) fuel cell technology that can run on pure hydrogen. But Microsoft says it couldn’t find any suppliers making PEM fuel cell systems large enough for its data centers. So Microsoft asked Plug Power, experts in hydrogen fuel cell systems, to build a custom one. Microsoft and Plug tested the system over several weeks in June. After successfully testing the prototype, Plug is working on creating a streamlined commercial version. Microsoft says it will install the system at a research data center next, with no specified target date yet for introducing the technology at one of its live data centers.

There’s a whole lot of hype around hydrogen as a cleaner alternative to fossil fuels right now. The Biden administration has an $8 billion plan to build out hydrogen production “hubs” in the US, for example.

The process of making the hydrogen fuel itself can get dirty

But that hype is also garnering some criticism. While hydrogen fuel cells might only produce heat and water, the process of making the hydrogen fuel itself can get dirty. Today, most of it is made with natural gas, a fossil fuel. Microsoft tested its prototype using so-called “blue hydrogen,” which is made with natural gas paired with carbon capture technology that’s supposed to draw down most of the carbon dioxide emissions that come from using fossil fuels.

In the future, Microsoft hopes to use only “green” hydrogen that’s made with renewable energy instead of fossil fuels. But that’ll likely depend on factors outside of Microsoft’s control — like whether the Biden administration and other governments prioritizing clean energy can bring a lot more renewable energy online, build out the infrastructure to produce and transport green hydrogen, and make green hydrogen cost-competitive with dirtier fuels.