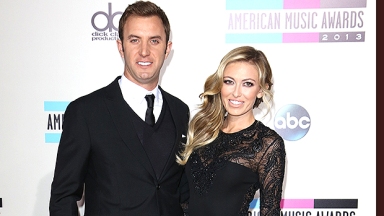 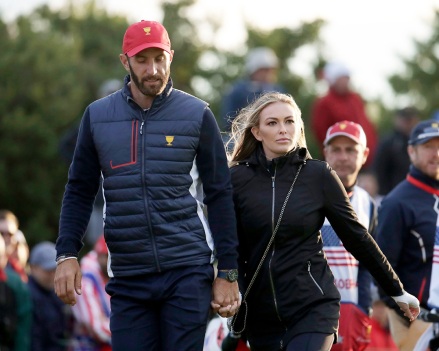 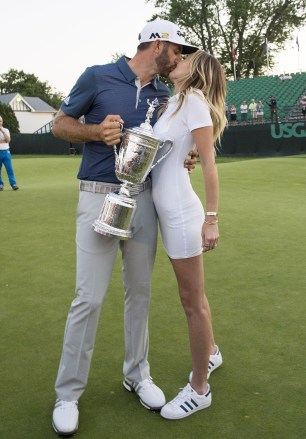 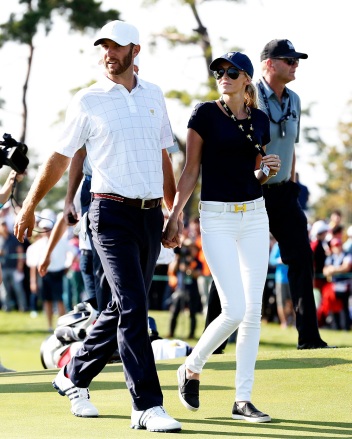 For years, whenever Dustin Johnson hit the green, his biggest fan and number one supporter, Paulina Gretzky, has supported him. After a chance meeting in 2009, Dustin and Paulina began a romance that has lasted through PGA Tours, pandemics, pregnancies, and more. While Wayne Gretzky’s future son-in-law is more attuned to hitting a hole-in-one than a hat trick, this sports romance has flourished. Here’s a look back at how it all began. 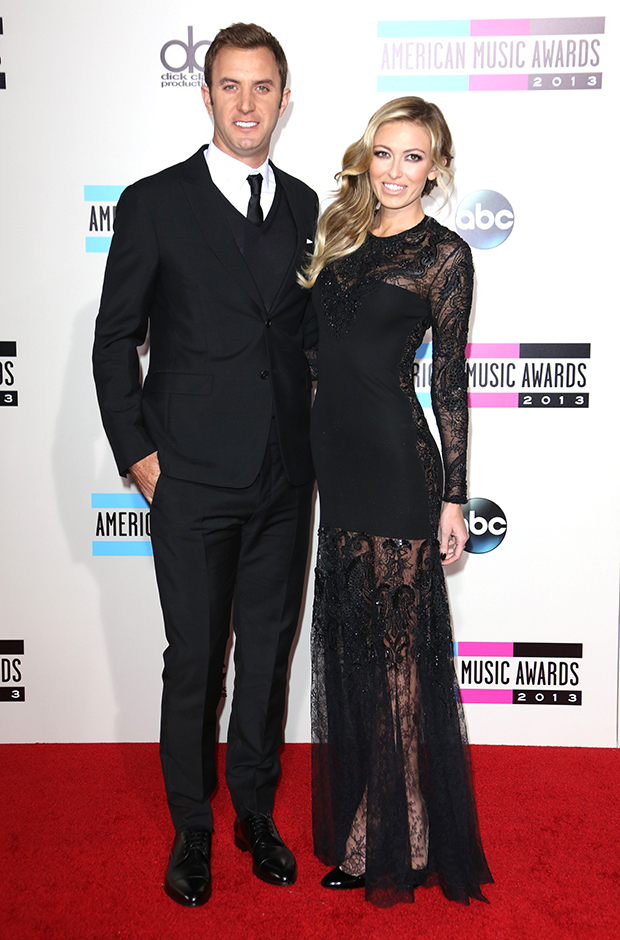 For many, it feels like Dustin and Paulina have always been engaged. That’s because Dustin popped the question shortly after the two began dating.

Paulina Gretzky — Photos Of The Model & Her Family

Paulina and Dustin first met in 2009, but they didn’t go on their first date until three years later, according to Golf magazine. “I don’t know if you can call it a date since my dad tagged along,” she told Golf magazine. “That’s how it goes in our family,” said the man known as “The Great One.” “Janet [Gretzky] and I go out to eat, and we somehow always wind up with seven or eight people at the table. Everyone is invited.”

Clearly, there was chemistry despite this chaperone. In August 2013, Dustin proposed to Paulina. “Never been happier,” she captioned a now-deleted Instagram post while Dustin shared a picture of her new ring. “She said yes!!!”

Bryan Randall: 5 Things About Sandra Bullock’s Boyfriend Whom She Calls A ‘Saint’

Paulina Gretzky and Dustin Johnson Give Birth To First Baby (2015) 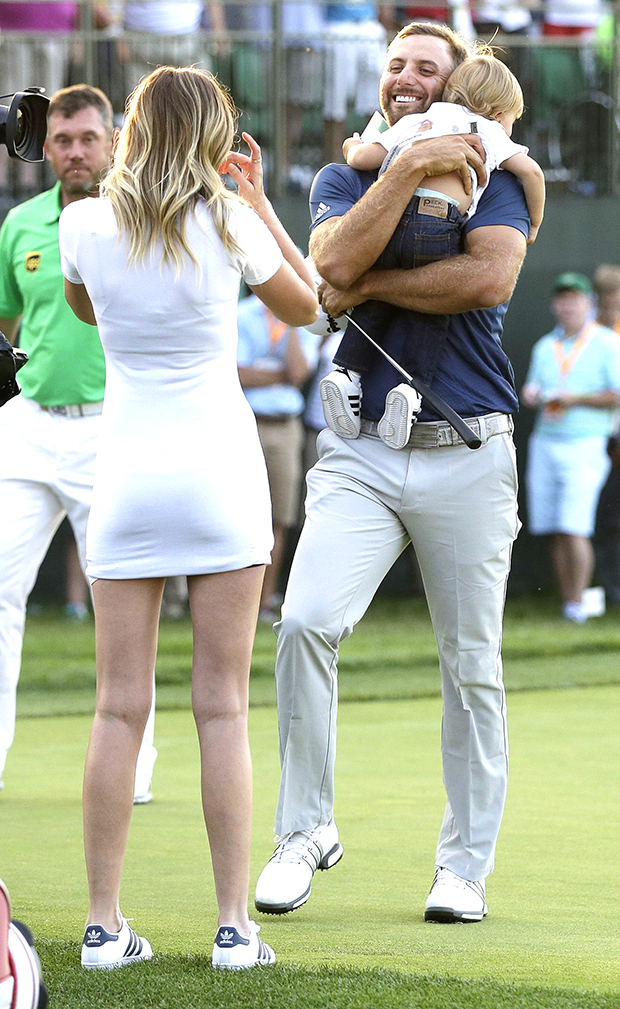 Tatum Gretzky hugs his daddy on the 18th hole during the final round of the 2016  U.S. Open golf championship at Oakmont Country Club (Shutterstock)

In the near-decade that followed that engagement, Dustin and Paulina began to build a life for themselves. This also included starting a family. In September 2014, Paulina announced she was pregnant with their first child. The now-deleted Instagram post showed Paulina cradling her baby bump, per PEOPLE. “@djohnsonpga & I are so excited to finally share with you all our amazing news,” she captioned the photo. “We’re having a baby!!”

Dusting and Paulina welcomed their son, Tatum Gretzky Johnson, on Jan. 19, 2015. “Paulina and I are happy to announce the arrival of our baby boy, who was born in Los Angeles on Monday morning,” Dustin said in a statement. “Both Paulina and the baby are healthy, resting comfortably and in great spirits. We sincerely appreciate the outpouring of love and support we have received and plan to release further details in the coming days!”

Tatum would soon join his daddy on the PGA Tour, supporting him alongside Paulina. 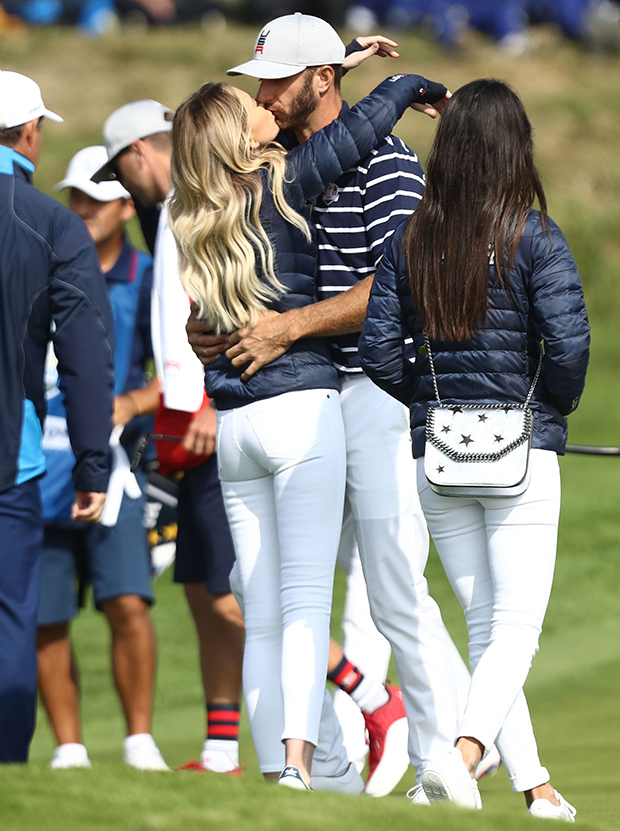 Two years after Tatum came into the world, Paulina and Dustin announced their family was growing. In mid-February 2017, Paulina posted a photo (now-deleted) to her Instagram. In the pic, she’s cradling her baby bump while holding up an ultrasound. “Coming soon…” she captioned the shot. The second baby – son River Jones Johnson – arrived on June 14, 2017. “Welcome to the world, baby boy … we all love you so much,” she captioned an Instagram shot of Tatum kissing his baby brother’s head.

As one might have noticed, many photos from Paulina’s Instagram have been deleted. This purging took place in 2018. She scrubbed her account of every picture of Dustin, leading many to speculate that they had broken up. Two days after the reports of a possible split, Dustin tweeted out a statement.

“Every relationship goes through its ups and downs, but most importantly, we love each other very much and are committed to being a family. Thank you for your love and support.” The two worked through their issues, however, and their relationship continued forward, stronger than ever.

The Two Prepare For Their Wedding (2022) 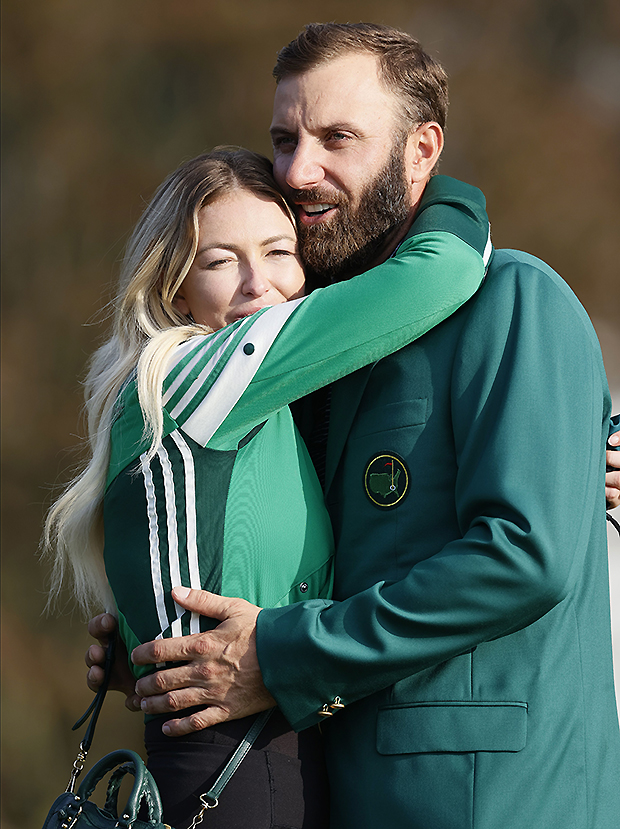 Paulina Gretzky hugs Dustin Johnson as he poses with his jacket after winning the 2020 Masters Tournament at the Augusta Natioweren’tf Club in Augusta, Georgia (Shutterstock)

The COVID-19 pandemic put a pause on everyone’s wedding plans when it hit the U.S. in 2020, but Paulina and Dustin weren’t in a rush to get married in the first place.

“I fell in love with someone so fast, and we had the best thing that ever happened to us, happen so quickly,” Paulina said in 2021 when appearing on the Pillows and Beer podcast. “The most important thing was my kids, Dustin, and my career. Those things took precedent. Those things had to be established. So, after he won the Masters [in 2020], I said let’s do it, this makes sense.”

2022 was the year they finally pulled the trigger and walked down the aisle. A year after going wedding dress shopping with Vera Wang, Paulina took her besties on a bachelorette party that turned into a weekend of fun and adventure. In a photo taken before the February 2022 bash, Paulina posed in a white mini dress on the steps of a private plane. Her bridesmaids, dressed in pink, posed alongside her.

On Saturday, April 23rd, the lovey-dovey couple finally walked down the aisle in a gorgeous Tennesse ceremony at The Wellhouse at Blackberry Farm; and of course, the bride wore a Vera Wang design. The lavish outdoor event was replete with white flowers and smiles.

“Even though Paulina and Dustin have been together for years, there is definitely a feeling of a sense of renewal in their relationship since getting married,” a source EXCLUSIVELY told HollywoodLife in May. “They’ve always had such a close, loving bond but since making things really official, they are like giddy schoolkids again.”