The England women’s team have just won the second half of extra time in the final in a tense moment for football fans across the country.

Kane was snapped cheering on the team from the stands at Wembley and he was hoping along with the rest of the country for England to bring football home – and they did!

After the match he tweeted: ‘Absolutely unreal scenes at Wembley!! Massive congrats to the amazing Lionesses!!

‘@ellatoone99 take a bow for that finish too.’ 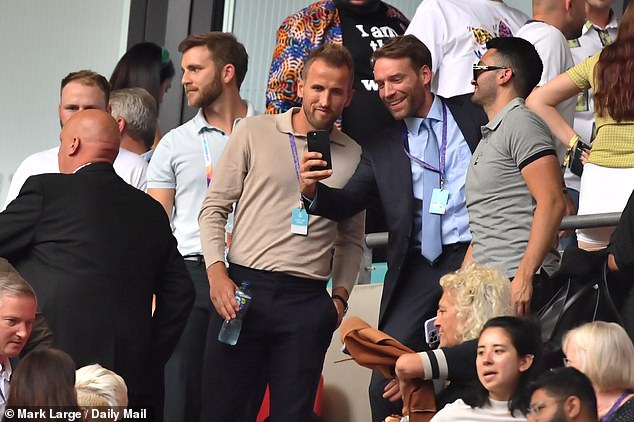 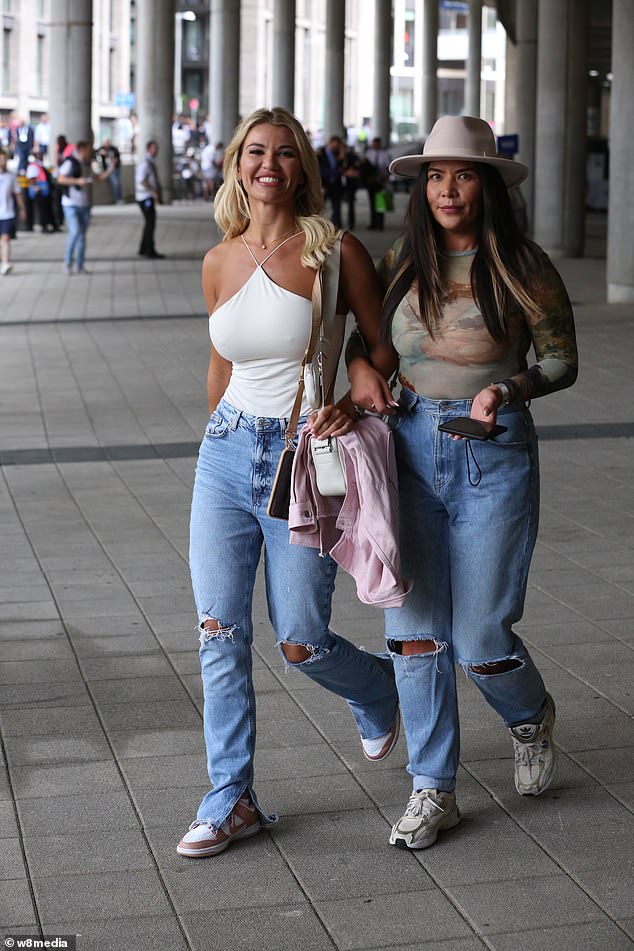 Christine McGuinness has also shown support for the Lionesses, posting on Instagram they were ‘Women supporting women’

On twitter earlier today he posted: ‘Hi Lionesses, I just wanted to wish you all the best for today’s game against Germany.

‘I can’t wait to be there myself so I wish you all the best, good luck, go get that win, the whole country is behind you.’

‘Going against the grain

‘Doing what they love

‘And our country getting behind them shouting “Yes girls” 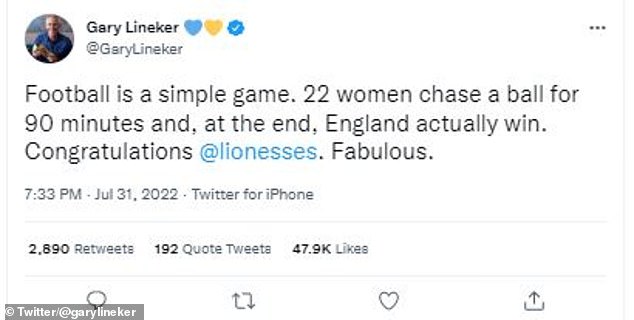 Gary Lineker has been cheering on the Lionesses all day as well.

Before the match he posted on Twitter: ‘Wishing all the very best for the final. You’ve been utterly superb in this tournament.

The Match of the Day Presenter also commented on how the final shows the growth of the women’s game. He said: ‘ A full house at Wembley to watch the Women’s Euro final.

‘It really is amazing to see the growth in the women’s game. Football is, more than ever, the global game.’

He gave a running commentary of the match on his feed, calling Ella Toone’s goal a ‘what a finish’, that was ‘beautifully done’.

After the historic win, he tweeted: ‘The Lionesses have only gone and done it, and Kelly is England’s heroine, bra none.’

He added: Football is a simple game. 22 women chase a ball for 90 minutes and, at the end, England actually win. Congratulations. Fabulous.’

Gary Neville tweeted: ‘What the Lionesses have just done is amazing and so damned b***** hard to do.

‘A seismic moment for Sport in this country! Well done to you all’

‘It’s been an unbelievable effort so far and just one last game to go. Enjoy the occasion. Come on England #Lionesses’

At about 6.50pm Lord Alan Sugar tweeted: ‘Come on Ladies you can do it keep your nerve.’

The Lightning Seeds and David Baddiel, who co-wrote the famous footy anthem with Frank Skinner both tweeted: ‘It’s coming home’ after the Lionesses won the final.

The band tweeted: ‘What a win @Lionesses. It’s Coming Home!!’

Comedian David Baddiel tweeted just ‘It’s…’ during the match at around 6.20pm.

Less than 15 minutes later the Lionesses won the final, and he completed the famous footballing catchphrase, tweeting: ‘Home.’

The Queen has also shown support for the Lionesses after their historic win, saying they will set an example for women and girls.

‘My warmest congratulations, and those of my family, go to you all on winning the European Women’s Football Championships.

‘It is a significant achievement for the entire team, including your support staff.

‘The Championships and your performance in them have rightly won praise.

‘However, your success goes far beyond the trophy you have so deservedly earned.

‘You have all set an example that will be an inspiration for girls and women today, and for future generations.

‘It is my hope that you will be as proud of the impact you have had on your sport as you are of the result today.

Prince William tweeted his support of the Lionesses, saying: ‘Sensational. An incredible win @Lionesses and the whole nation couldn’t be prouder of you all.

‘Wonderful to see history in the making tonight at Wembley, congratulations! W’ 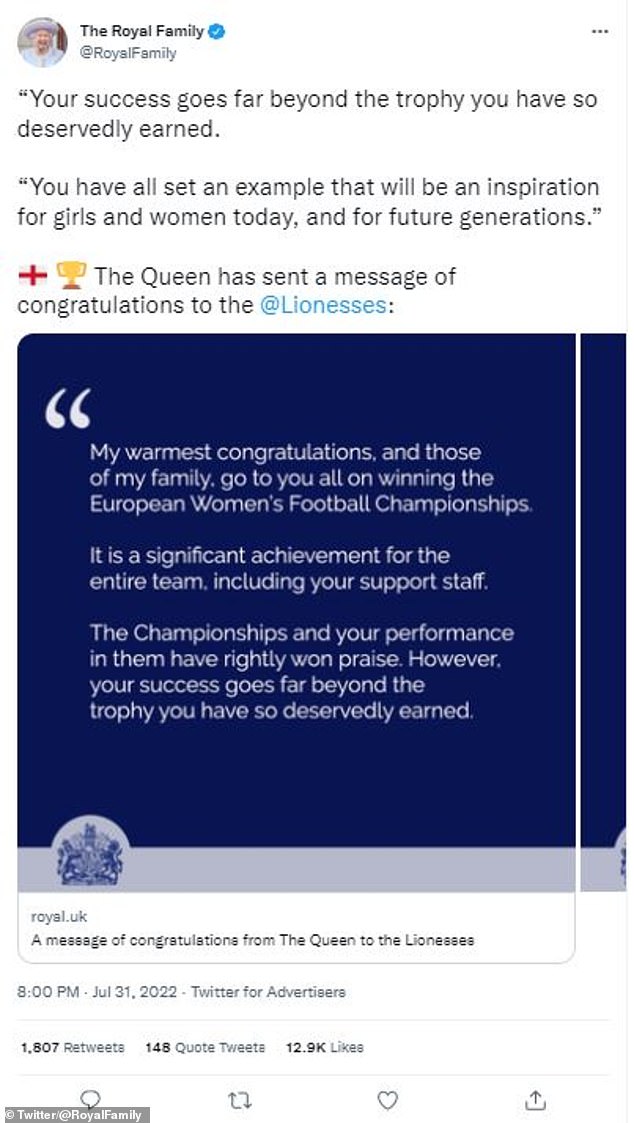 The Queen has also shown support for the Lionesses after their historic win, saying they will set an example for women and girls. 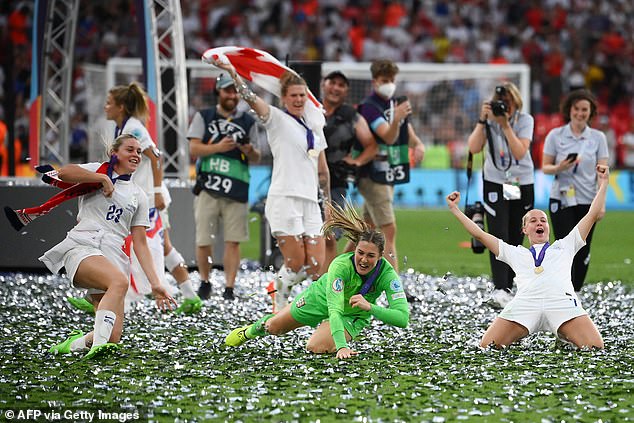 Adele was also among the famous faces to praise the Lionesses following their victory.

The singing superstar shared a photo of the England women’s team celebrating their win on Instagram, describing the moment as a ‘game change’.

She wrote: ‘You did it!! It’s come home!! Congratulations @lionesses what a game changer!! So proud.’

The Lionesses did impress Shania Twain that much as the singer tweeted her support after their win.

She said: ‘You know these women will have had to fight for respect from the first moment they picked up the ball – Lets f***ing go girls!’

The Spice Girls praised the Lionesses for their ‘girl power’ following their historic win against Germany.

Labour leader Sir Keir Starmer said England had made the ‘entire nation proud’ after they won the Women’s European Championship.

He tweeted: ‘The @Lionesses, you have inspired a generation of women and girls.

‘My daughter and her friends have strong, successful role models in sport because of you.

‘The entire nation is so proud.’

Lisa Riley, famous for playing Mandy Dingle on Emmerdale tweeted: ‘Prince William hugging the players…..making me cry my eyes out!!!!

‘The true meaning of the word CHAMPIONS