Posing in bucket hats and the trophy on ice with a crate of beers! Behind the scenes of England’s wild celebrations after beating Germany to secure the Euro 2022 title

By Max Mathews For Mailonline

England have put the European Championship trophy on ice in a crate of beers in unrestrained celebrations after winning the title.

The Lionesses beat Germany 2-1 in front of a raucous sellout crowd at Wembley Stadium on Sunday thanks to goals from substitutes Ella Toone and Chloe Kelly.

And after Sarina Wiegman’s side secured the win against their old rivals – the first ever major trophy in English women’s football and the first in men and women’s football in 56 years after the 1966 World Cup – the players let their hair down. 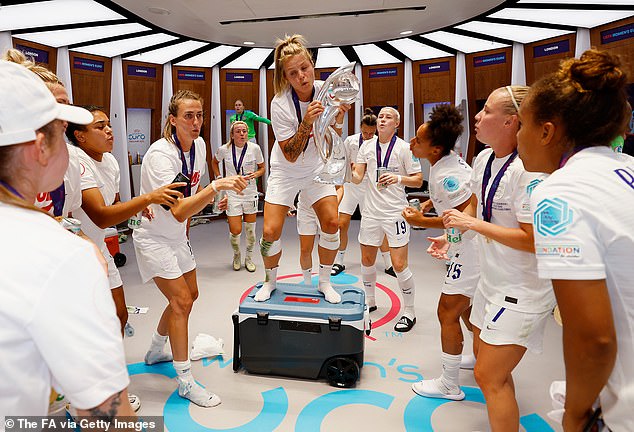 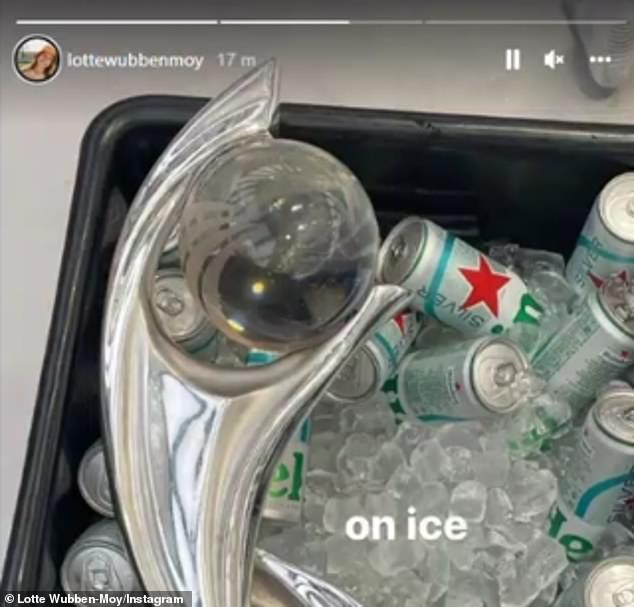 The Instagram story of defender Lotte Wubben-Moy showed the Euro trophy nestling in a huge crate of Heineken beer cans and ice cubes with the caption ‘on ice’.

Manchester United star Toone, meanwhile, posted on her social media in a red England bucket hat, alongside the trophy and the gold medal.

She posed alongside team-mates Leah Williamson and Beth Mead and added the message: ‘Best day of my life. Thanks for all the messages !!! Get back to you tomoz,’ with a kiss emoji. 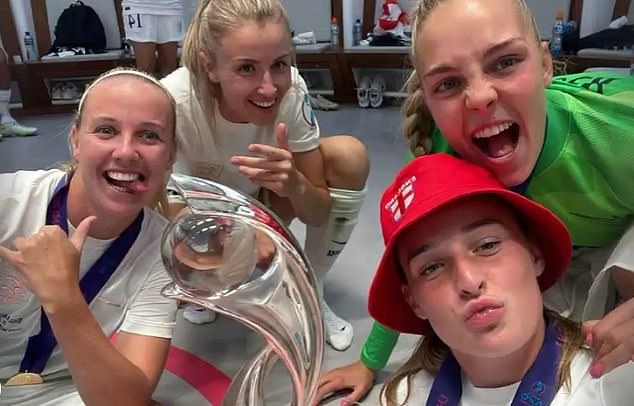 Toone later said: ‘Not ignoring people am just having a ball,’ followed by champagne, England flag and love-heart emojis as ‘You’re a Superstar’ by Love Inc. played in the background.

The other goalscorer, Kelly, posted a picture of herself on the coach wearing an England cowboy hat and beaming next to winger Lauren Hemp while holding her winning medal.

Captain Leah Williamson’s Instagram story, meanwhile, showed Georgia Stanway dancing in the dressing room and then showed Toone and the team singing along to ‘Rockin’ All Over the World’ by Status Quo with the words: ‘Tooney and Lessi Russo’.