Chrishell Stause returned to Instagram by giving her followers a fashionable photo dump earlier on Sunday.

The Selling Sunset star hadn’t posted in days, so she captioned her post, ‘Sorry guys, I’m back!’

In the series of cute throwback snaps, the TV personality, 41, mentioned how much she couldn’t wait to see her co-stars and her rescue dog, Gracie. 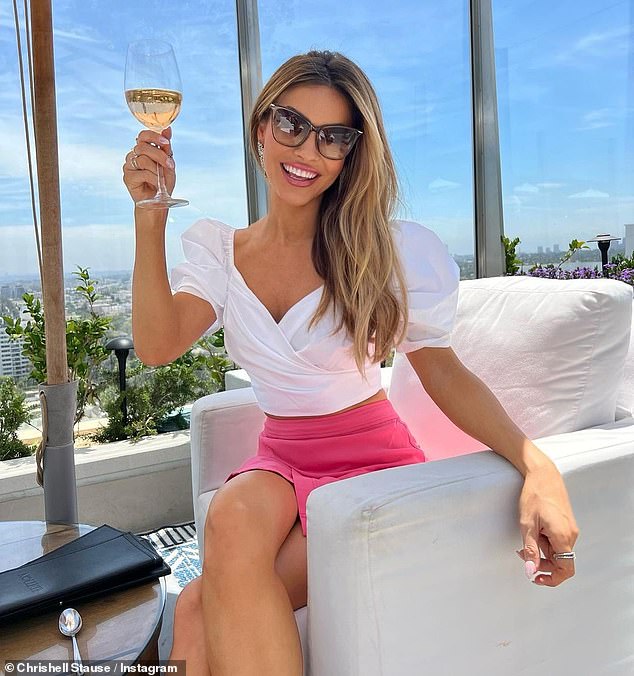 Gorgeous: Chrishell Stause, 41, stunned in a white crop top and pink miniskirt as she returned to Instagram

The first picture that the actress shared was a photo of herself posing in a white crop top with puffed sleeves.

She added a hot pink miniskirt while enjoying an afternoon out as summer starts to wind down to a close.

Chrishell wore a pair of large sunglasses as she lounged on a comfortable chair at a rooftop restaurant with an impeccable view. She had a big smile on her face as she held a glass of white wine in her hand. 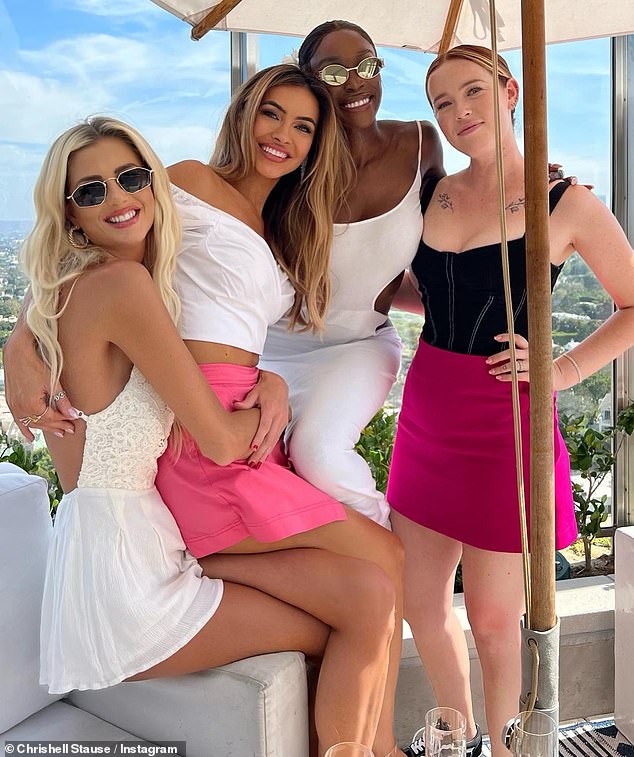 Close friends: The actress was seen posing with two of her Selling Sunset co-stars, Emma and Chelsea, along with friend, Aubrey 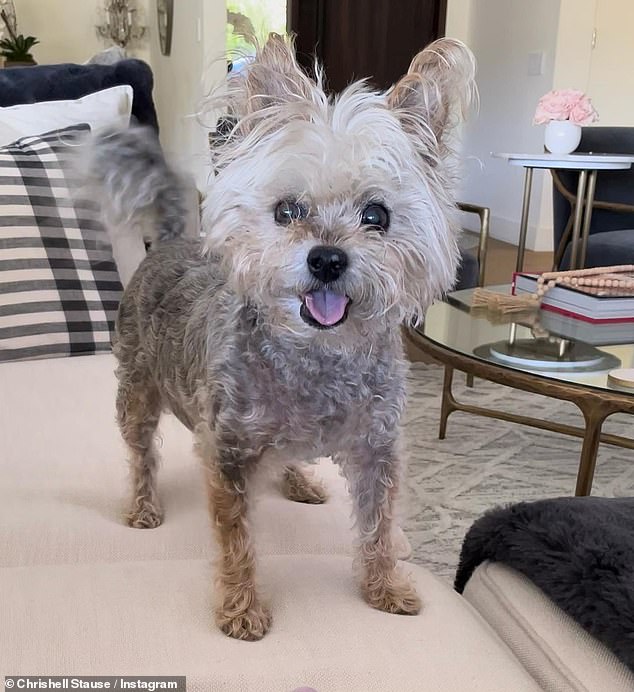 So cute: The beauty shared how excited she was to be able to see her rescue dog, Gracie, again

Another throwback photo showed Chrishell posing with two of her Selling Sunset co-stars, Emma Hernan and Chelsea Lazkani, along with another friend, Aubrey.

She shared an adorable snap of her adopted dog, Gracie, and made sure she gave her a loving shout out.

In the caption, the All My Children actress explained why she had forgotten to post on Instagram. ‘Cheers to having so much fun, you forgot about the gram.’

See also  Lindsay Lohan married to ‘my everything’ Bader Shammas

‘Sorry guys, I’m back! Excited to see all these beauties and Gracie soon,’ she concluded. 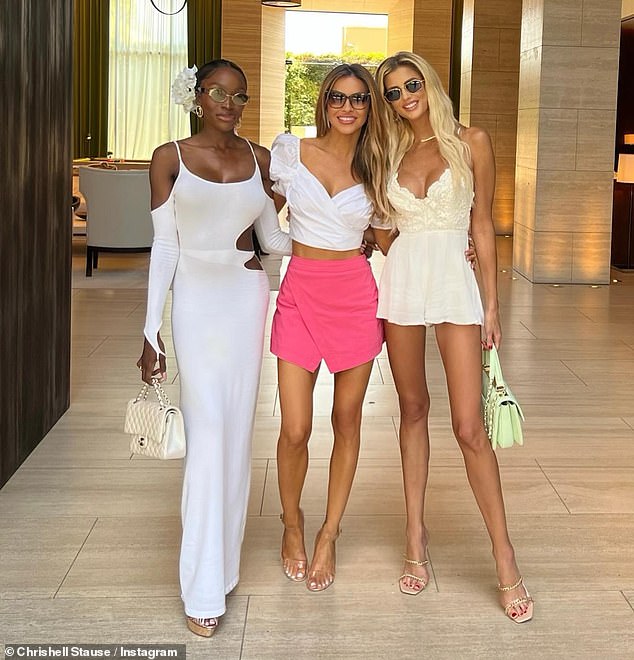 Happy: Chrishell appears to have a very good friendship and bond with her Selling Sunset co-stars 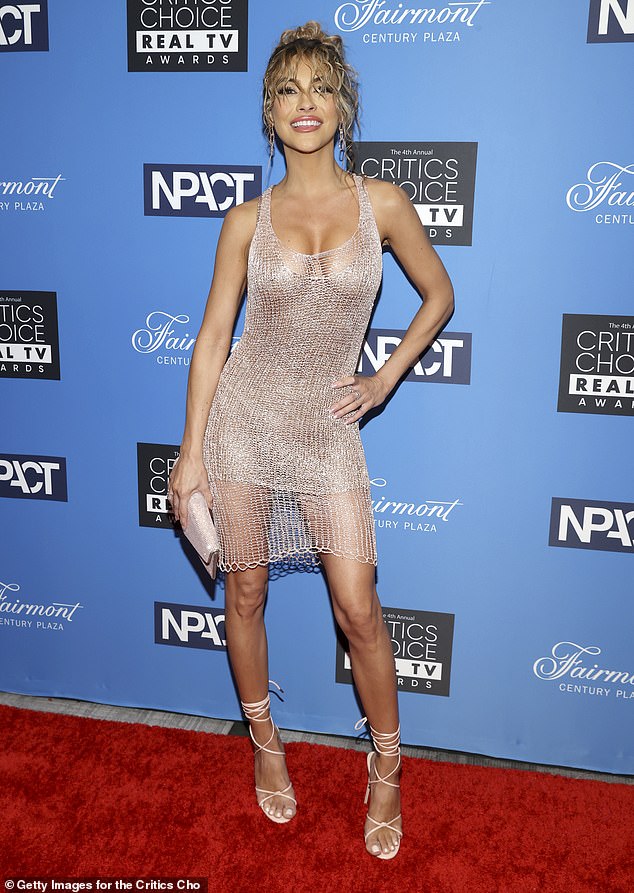 Busy: Along with starring in the hit Netflix reality series, Selling Sunset, the real estate star has been enjoying her relationship with G Flip; seen in June in Los Angeles

When she is not working on set of the popular Netflix reality show, Chrishell has been enjoying her relationship with Australian musician, G Flip.

In a recent interview with Vogue, the star opened up about dating the singer. Previously, the actress dated and broke up with her co-star and boss, Jason Oppenheim, which was portrayed in season five of Selling Sunset.

‘It really is just a super-open, communicative situation where we don’t want to block anything for either person, and we want to offer each other love and support no matter what form it takes,’ she told the publication.

‘Without a doubt, we’ll always be in each other’s lives, so that feels good,’ the TV personality added. 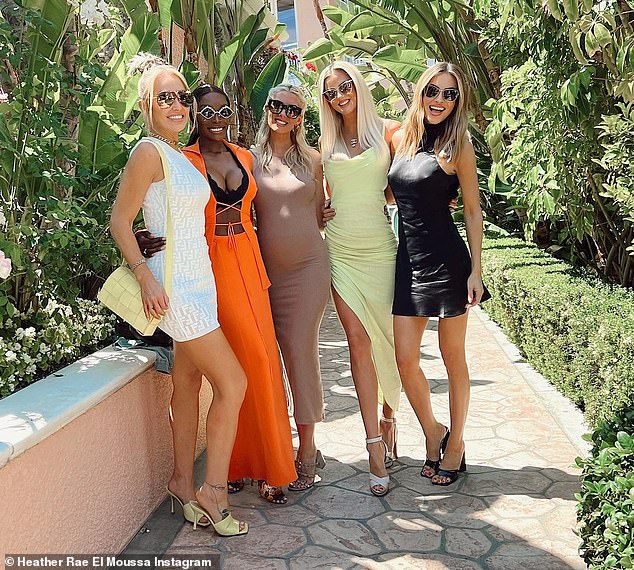 Stylish pals: Chrishell was pictured enjoying a delicious outing with some of her co-stars 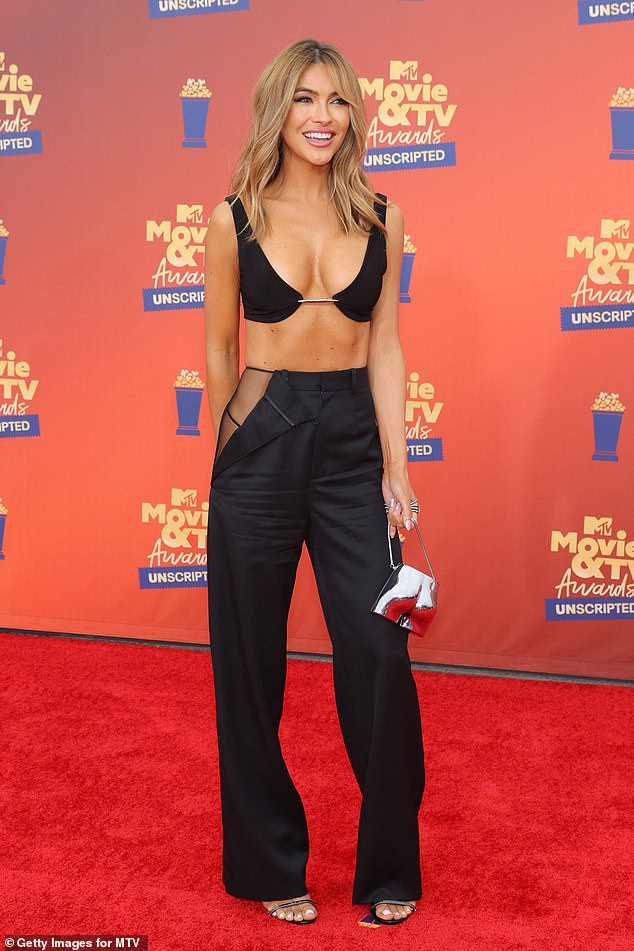 Moving on: The TV actress previously dated her boss, Jason Oppenheim, which was shown on season five of Selling Sunset; pictured in June in Santa Monica, Calif.

During an interview with The Hollywood Reporter, Chrishell discussed what it was like to star in the Netflix series.

‘It’s unlike any other job in the world. It comes with extreme high highs and low lows, because when you’re living these moments, you normally aren’t able to watch them back and relive them,’ she explained.

‘It’s so exciting to be able to share that with people, but there’s the flip side of that,’ the beauty added.

The real estate star also explained that she does see herself on Selling Sunset, but doesn’t know how much longer.

‘I don’t foresee myself doing this for a long time, but I think that as long as you’re still enjoying it, that’s the key.’ 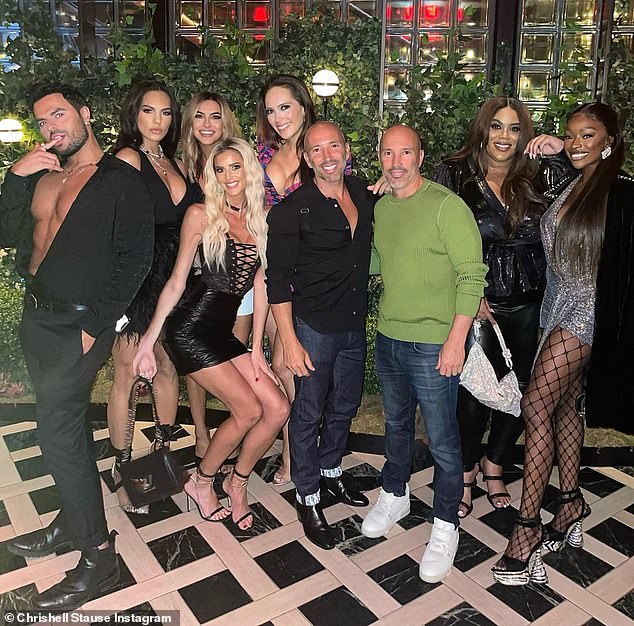 Great team: Despite having occasional ups and downs, the stars of Selling Sunset have developed a close bond 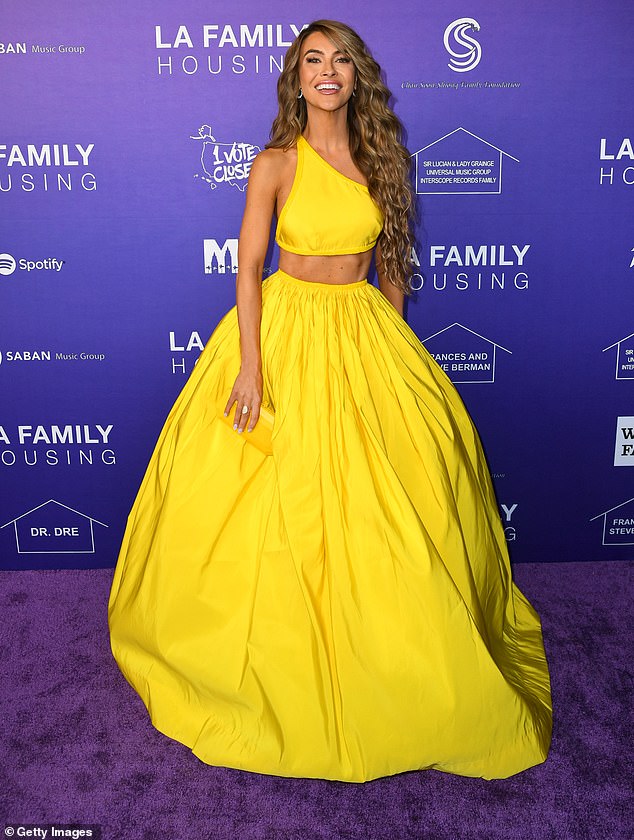 Glammed up: Chrishell often stuns with her outfits on the series and red carpet events that she attends; seen in April in West Hollywood