Roku has a problem — its buttons aren’t printing enough money

No, you didn’t suddenly forget how to read: Roku, the streaming box and service company, is worried about how much money its buttons are bringing in. Not because it suddenly started making clicky actuators for other companies to include in their products (what a pivot that would be), but because Roku’s really an advertising company in streamer’s clothing. And it absolutely has prime real estate to sell to streaming services: for a fee, it’ll plaster their logos onto buttons that customers will likely see every time they use a Roku. Even better, those buttons will only launch that service.

Basically, Roku’s best ROI may be the Netflix-red and Disney-blue paint its suppliers buy.

Near the bottom of each Roku remote, you’ll see four buttons labeled with a variety of streaming services — currently, Roku’s website shows Netflix, Disney Plus, Apple TV Plus, and Paramount Plus. That’s an absolute plethora of pluses, though the buttons change over time as new streaming services are born, die, or make different decisions about where to spend their ad budgets. (I like to imagine that someone once received the worst remote ever, only featuring buttons for streaming services they never use like Sling, Rdio, PlayStation Vue, and Quobo. Points if you can guess which one of those is made up without googling.) 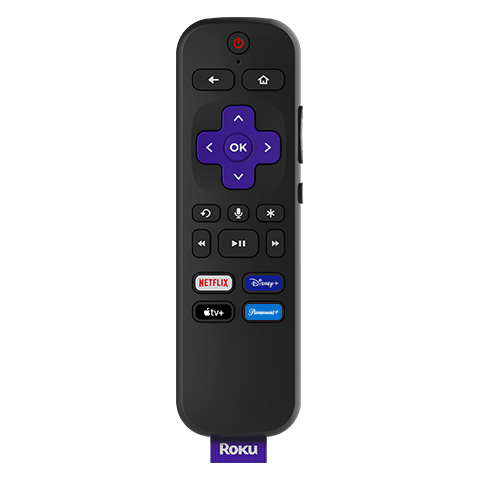 Sorry if you wanted buttons that everyone would use.Image: Roku

Roku’s certainly not the only company that relies on “button revenue,” but it really pushes these buttons hard; on its simple remote these shortcuts make up literally a quarter of all the buttons, even if you’re very generous and count the D-pad as four separate inputs. That ratio doesn’t change all that much when you move up to its Voice Remote or Voice Remote Pro, either. It’s easy to see why Roku makes the buttons so prominent; in 2019 Bloomberg reported that streaming services paid about $1 per customer to put their button on the remote. If that number is still accurate, that means Roku could be making up to $4 per remote, just from streaming service fees. Multiply that across most of the 63 million active accounts Roku reported in its Q2 2022 earnings (pdf), and that’s a big chunk of change.

If you’re Roku, that’s a stroke of genius; each time you sell a remote, you get money from whoever’s buying it and from four streaming services. Limiting it to four slots on most models is also smart — last I checked, there were way more streaming services than that who would love to have a button on Roku’s remote. If there’s one thing I learned from my economics classes (aka the great GPU scalping wars of ‘20 and ‘21), low supply plus high demand equals cash in the bank. Roku can basically print money, as long as it keeps selling devices and remotes, and convincing advertisers to keep paying the same amount for their own special buttons.

Yeah, so about that. In its Q2 earnings call last week, the company said that it had to adjust its forecasts because people haven’t been buying as many Roku devices. According to the company’s CFO, the main reason a dip in player sales affects its forecasts “would be a lower expectation of button revenues in certain deals where we’ve sold those deep link buttons on the remote.”

To break that down: Roku didn’t change its financial assumptions just because it wasn’t selling as many streaming boxes, or because fewer boxes means a smaller audience it can sell to advertisers. “The most explicit” result of those reduced sales, according to Roku, is that its button profits are going down.

Of course, consumers aren’t the only ones that are hesitant to throw money at things. Roku’s also very concerned about advertisers tightening their purse strings too, warning shareholders that the current economy could crater ad budgets like the start of the pandemic did. (Reassuring!) That almost certainly includes budgets at some streaming services, which could also drive the price of Roku’s buttons down if they aren’t willing to bid as high for the real estate on your remote.

Sure, you might be able to just ignore these buttons (or live in continuous mild frustration that you can’t remap them to a service you actually use). But streaming services are generally under the impression that paying Roku for button placement could help net them enough subscribers to make it worthwhile, and Roku has now revealed just how important those button assumptions are to its bottom line. If you ever wanted an example of how valuable your attention is, Roku’s buttons may have just put one at your fingertips.