Look, we all hate Vecna, but we all love Jamie Campbell Bower. The Stranger Things actor stopped by The Tonight Show with Jimmy Fallon on August 2 to talk all about the Netflix hit. Naturally, Vecna was a topic of conversation. 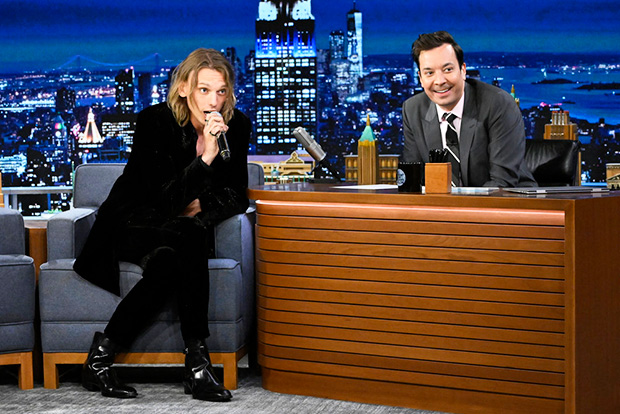 Jimmy Fallon has Jamie, using his Vecna voice, say things Vecna would never say. “I’m sorry about this everyone,” Jamie jokes before saying lines from Notting Hill and Titanic as Vecna.

The best moment is saved for last, though. Jamie sings Lizzo’s “About Damn Time” as Vecna! An instant legend. Give us the Lizzo and Vecna collab!

Jamie admitted his entire Stranger Things experience has been “such a blessing.” He told the host that his transformation into the Stranger Things villain was about “90 percent real. It takes about 8 hours to put the whole thing on.”

When it came to nailing Vecna’s voice, Jamie revealed that it took him a few months to get it right. He got the job of Vecna/Henry Creel in January 2020, so he had February to prepare his voice before the March table read.

He noted that Vecna’s voice initially started in the realm of Freddy Krueger. Robert Englund ironically played the older version of Henry Creel’s father on Stranger Things. Jamie admitted that the voice just “wasn’t landing,” so he went home and looked to Hellraiser and Doug Bradley as inspiration. He soon learned that “this deep, booming voice comes from the darkness” and embraced that.

In the wake of Stranger Things season 4, Jamie and his co-star Joseph Quinn have become stars on a global scale. “Everything just feels not real right now,” Jamie said.

As for what’s next for Jamie ahead of Stranger Things season 5, he’s releasing his new song “I Am” on August 12. He’ll soon be working alongside Kevin Costner on a new western. The future is bright for Jamie, that’s for sure.