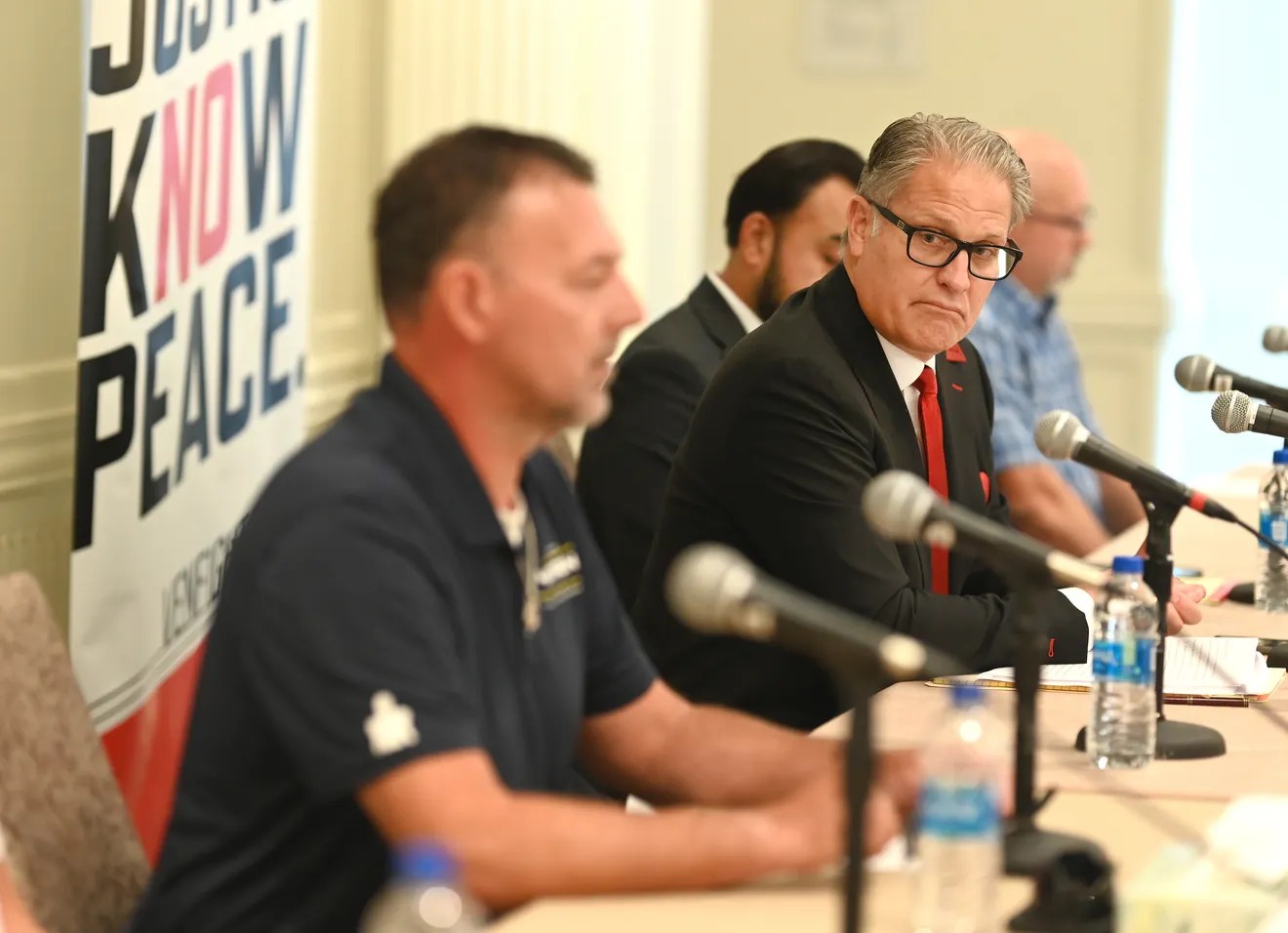 By Robert Snell | The Detroit News

Detroit — An armed Oxford High School security guard failed to stop a mass shooting that killed four students and injured seven others, thinking the attack was a drill and that one student was wearing “really good makeup” as he bled to death, a victim’s lawyer argued Wednesday.

Attorney Ven Johnson, who represents several victims and their families, leveled the allegation against the security guard after viewing school surveillance video of the attack. His review coincides with a broader scrutiny nationally of law enforcement response to active shooter attacks since May when a shooter in Uvalde, Texas, killed 19 students and two teachers as police waited in the hallway.

Speaking during a news conference Wednesday attended by relatives of students killed or injured in the Nov. 30 attack, Johnson focused on a roughly five-minute timespan during the mass shooting, its immediate aftermath and what he portrayed as several wasted opportunities to intervene and save the life of at least one student, 17-year-old student Justin Shilling.

“It’s difficult to know that he could still be here,” Shilling’s father, Craig Shilling, told reporters. “I’m never going to be the same.”

Johnson built his chronology after viewing surveillance footage this week that has not been publicly revealed. Oakland County Sheriff’s Office officials and prosecutors, meanwhile, declined to comment about the footage or respond to Johnson’s allegations and the security guard did not respond to a message seeking comment.

The new allegations emerged as Johnson moved to amend a civil lawsuit to name the security guard, a retired Oakland County sheriff’s deputy, as a defendant. According to the guard’s LinkedIn profile, she retired after more than 28 years as a sheriff’s deputy and spent more than two years working at the high school before leaving in June. Her bio lists her as being “involved in the November 30th school shooting.”

According to Johnson, the security guard was armed and should have known 15-year-old student Ethan Crumbley had launched an attack inside Oxford High at approximately 12:51 p.m. on Nov. 30. That is when the first shot was fired and as students ran and tried to hide.

“At that time, (the guard) should have immediately turned on her body camera, called for backup and medical assistance, and taken affirmative action to expeditiously locate and confront (Crumbley) to prevent harm to other students,” Johnson wrote in the proposed amended lawsuit.

The guard told investigators she assumed students were participating in an “ALICE” drill, according to the lawsuit. The drills are used to practice responses to situations involving active shooters. ALICE stands for Alert, Lockdown, Inform, Counter and Evacuate.

At one point, the security guard spotted a victim on the floor of a hallway, according to Johnson’s filing.

“She saw Tate Myre’s body on the floor with him bleeding to death and informed the investigators that she thought he had ‘really good makeup’ on,” Johnson wrote.

The guard eventually realized the shooting was not a drill, according to Johnson. She pulled out her firearm and opened the door of a bathroom where Crumbley was with Shilling and student Keegan Gregory.

The guard opened the door but did not enter the bathroom, Johnson said.

The guard “clearly had an opportunity to intervene and prevent Justin’s death,” Johnson added. “(The guard) informed the investigators that she did not see anything or hear anything, which is why she decided not to enter the bathroom.”

After Justin Shilling was shot, Keegan ran out of the bathroom and fled down the hallway.

“This fact conclusively establishes that (Crumbley) would have surrendered had (the guard) entered the bathroom and confronted (Crumbley) before he shot Justin and threatened to shoot Keegan Gregory,” Johnson wrote.

Parent Meghan Gregory, whose son, Keegan, survived the shooting, said actions revealed on surveillance footage felt like an “absolute punch to the gut.”

“It truly shattered us — knowing Justin was still alive,” she told reporters. “It hurts to the core.”

Johnson has said he wants to argue the unconstitutionality of the Oxford Public School District — or any government body — “to hide behind governmental immunity.”

Shilling’s mother, Jill Soave, called the latest development “heartbreakingly unbearable to accept,” according to a message read by Johnson on Wednesday.

“Our only comfort is that after eight months, the truth is coming to light,” Soave wrote.

Superintendent Ken Weaver said in a statement Wednesday that students and staff acted swiftly and several staff members “exhibited heroic courage” the day of the shootings.

“Review by a security expert confirmed our staff response reduced additional harm and loss of life,” Weaver said. “We are confident the investigation and third-party review of the events of that day will bring all of the facts to light. Safety continues to be our top priority at Oxford Community Schools. We will not be deterred and will continue our commitment of providing a high-quality education for our students in a safe educational environment as we continue to honor Justin, Madisyn, Hana and Tate.”

Oxford parents and students who survived the Nov. 30 attack have filed at least 10 lawsuits in state and federal courts seeking tens of millions of dollars from the school district, administrators, counselors and the firearms dealer who sold the weapon used by the accused shooter.

Johnson wants to add the security guard to a lawsuit initially filed in January in Oakland County Circuit Court. The original lawsuit was filed on behalf of the families of Myre and Schilling and three other students who survived the shooting incident but remain traumatized, according to court documents.

See also  If Newsom wants to resist the Supreme Court, why ‘double down’ on fossil fuels?

After the Oxford shooting, Oakland County Sheriff Michael Bouchard praised the hundreds of first responders who responded to the attack.

“After other school shootings across the country, in some scenarios where deputies didn’t go in, I made it very clear to our staff, if they get there first, they’re going in,” he said earlier. “(Deputies) went in and searched out the threats. They went to the gunshots.”

Mullins, the attorney representing six Oxford school defendants named in the complaint, previously said he filed legal briefs months ago that government immunity protection was appropriate, but is prepared to argue the matter further if necessary.

Two Oxford High School staffers who met with Ethan Crumbley hours before the shooting were placed on paid leave but no one has resigned or been fired. Then-Superintendent Tim Throne retired and new superintendent Ken Weaver, who came to the high school the day of the shooting, took over the district in March.

Ethan’s parents, James and Jennifer Crumbley, had been called to the school the morning of Nov. 30 because of teachers’ concerns about their son’s behavior, including watching violent videos, searching for ammunition on his phone, and scrawling disturbing drawings and words on his math homework.

Ethan Crumbley explained to officials he did not pose a threat to himself or others, shot guns as a hobby and the drawing was for a video game he was creating. Unconvinced school officials asked the teen’s parents to remove him from school and seek mental health counseling for their son. The couple refused, saying they had to work that day and Crumbley was handed his backpack and allowed to return to class.

Less than two hours later, investigators said he pulled a handgun his parents had purchased for him earlier in the month from his backpack, exited a restroom and began shooting.