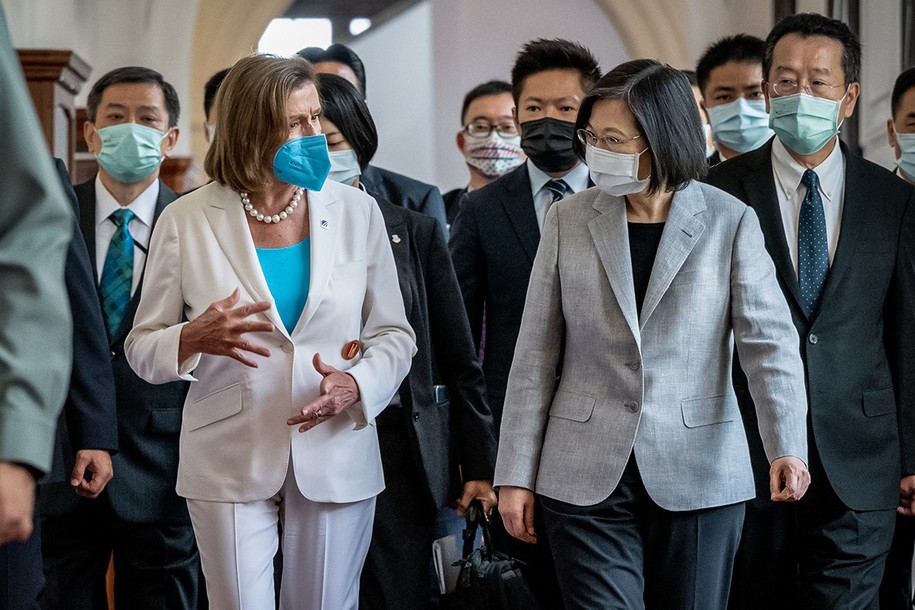 House Speaker Nancy Pelosi landed in Taiwan amidst all-out Chinese hysteria. While many questioned the wisdom of the trip amidst high global tensions, the post-visit reviews of her trip have been spectacular. Fox News gave her a strong review. Bloomberg said she “nailed the optics” of her visit.

The optics of the speaker’s meeting with Taiwan President Tsai Ing-wen were loaded with symbolism. Pelosi paid tribute to Tsai, saying, “We are so proud of your leadership, a woman president in one of the freest societies in the world.” The unspoken contrast was with the all-male leadership of the People’s Republic of China, where no woman has ascended to the Politburo Standing Committee, the highest political body, since its foundation in 1949. The understated presence and language of Taiwan’s popularly elected leader also stand in sharp relief to the bellicose rhetoric emanating from Beijing, which again repeated its warning that those who play with fire “will perish by it.”

[F]ar too many people have accepted the premise that the House speaker is responsible for heightening tensions in the region, rather than placing blame squarely where it belongs — on Beijing. While there was, prior to her arrival in Taipei, a legitimate debate about the timing of her trip, that window has since closed. Only Beijing is at fault for a gross overreaction to an American lawmaker exercising her prerogative to travel as she sees fit to a country where she is more than welcome.

This might’ve been the first, and likely the last time that publication will have kind things to say about Pelosi. But the praise spans the political spectrum, and was particularly salient given the current events in Ukraine—the free world must more forcefully advocate for democracies threatened by authoritarian regimes. Pelosi’s visit will likely spur other world leaders to visit the island, further highlighting China’s belligerence and odious human rights record.

Meanwhile, China and its propagandists now realizes that maybe, just maybe, they should have shown some restraint rather than issue threats it could never act on.

Ahead of Pelosi’s arrival on Tuesday, China warned repeatedly that the US would pay a heavy price for the visit, with President Xi Jinping telling Joe Biden that “whoever plays with fire will get burned.” Hu Xijin, the prominent former editor-in-chief of the Global Times, suggested in a now-deleted tweet that Chinese warplanes could “forcibly dispel Pelosi’s plane.”

After Pelosi touched down, Hu acknowledged in a post on China’s Twitter-like Weibo that the official response didn’t live up to public expectations.

Chinese leaders and their mouthpieces are now begging people for “patience” to cover for their inability to stop Pelosi’s visit.

In roughly 24 hours, Chinese officials and propagandists went from warning of a possible war to pleading for patience as Beijing struggled to articulate a cohesive response to Nancy Pelosi’s landmark trip to Taiwan.

It was the worst possible outcome for China—Pelosi demonstrated just how impotent China was to stop her visit, and she used the intense attention China’s histrionics generated to further shine a light on its despotic shortcomings. And after priming its public for action, the government looked weak in the face of what they declared to be Western provocation.

In Ukraine, a Russian offensive on the southeastern Donbas front is creeping forward.

Russia is trying to approach Bakhmut from three locations, while also pushing toward Pisky and Avdiivka down near Donetsk—two towns that have resisted Russian advances from the regional capital (and Russian stronghold) of Donetsk city for eight years. On that northern advance, Ukraine has established a solid defensive line from Bakhmut to Sivers’k. Russia hasn’t even gotten to that line, as Ukraine makes Russia pay for every meter it advances. Unlike Severodonetsk and Lysychansk, both isolated in a deep salient from Ukrainian artillery support, this line is well covered on the Ukrainian side.

Meanwhile, the southern approach is so nonsensical, that war criminal Igor Girkin, who commanded the Donbas forces in the 2014 war, nearly lost his head over it.

So, the Russian military thinking was marked by another genius military decision – while the ukrops are trying to achieve success on Kherson direction (where a breakthrough of a frontline in theory promises a deep penetration or at least an operational success), our military geniuses again decided to directly assault Avdiivka […]

Naturally, I wish our fighters maximum success. But even in the most favourable case (that is when after fierce street battles and fights inside the depths of the enemy’s prepared defences, our forces will take Avdiivka etc), the frontline will only be moved to the next defensive line of the enemy – that is the same Sloviansk – Kramatorsk – Druzhovka – Konstantinovka – Kurakhovo line. Hardly any deeper. Although for me personally such success does not seem to be guaranteed at all (knowing the state of the DPR and RF Armed Forces infantry).

Head-on assaults of this nature won’t get Russia far. They simply don’t have the man- and firepower to make it happen. This is patently futile. With Ukraine advancing in the Kherson area, perhaps Russian generals are feeling new pressure for action?

This is an amazing statistic:

Over the month of July 🇷🇺 increased the area of land they control in Ukraine by approximately 165 km².

That’s 63 square miles, the equivalent of taking a piece of land 10 miles deep, six miles wide. June even includes the Russian capture of Lysychansk! I did some quick checks, and here is the furthest Russia has been able to extend from its three major Donbas victories:

Very few of those gains happened in July, obviously, and what little they got was mostly offset by Ukrainian’s own modest gains west of Izyum, in southern Donbas, and around Kherson.

That Izyum approach hasn’t budged since Dovhen’ke fell on June 11. With the battle of Bohorodychne now over, Russia is actually moving backwards. So it’s no surprise seeing Russian war vehicles with the “V” markings—indicating Izyum advance—headed toward Kherson (as I wrote needed to happen about a week ago).

More reinforcements moving up from Crimea. If there is an offensive in Kherson / Nikolaev it’s going to be a big one. pic.twitter.com/N3H76Sy0bv

By all indications, Russia is shifting a huge number of their forces to Kherson where they are ripe for being cut off. Supplies and access to the Kherson region run through just three easy-to-cut railroads and a handful of bridges. You know how in some stupid movie, you see the heroes headed into a trap and you scream at the screen, because it’s so obvious it’s a trap?

But Russia doesn’t have a choice. This is the comeuppance of their under-resourced and now-decimated assault on Ukraine—they don’t have the forces to defend what they have. So they have to reinforce the one regional capital they managed to capture, and one that matters a great deal to Vladimir Putin’s Novorossiya (New Russia) fantasy—connecting Russia, Donbas, the entire Black Sea coast to Odesa, and into Moldova’s Transnistria region. If Russia loses Kherson, it hands Ukraine the biggest propaganda victory of the war since winning the Battle of Kyiv, and relegates Russia to the Donbas front, another humiliation for a supposed global superpower. Oh, and Crimea once again loses its water. Never underestimate the power of water.

Yesterday I wrote about the train Ukraine hit with HIMARS. Here’s more video of the strike:

Stop and watch this..