Iconic US sporting identity Pat McAfee has showed his five million followers just how much he loves AFL and its fans – going ballistic at Collingwood’s after-the-siren win against Essendon and throwing in a lesson on how Australians swear.

Speaking on his wildly popular Pat McAfee Show, the effervescent American – who was one of the NFL’s greatest punters – lost it over Magpie Jamie Elliott’s stunning goal against Essendon on July 24.

‘My team, the Collingwood Magpies … home of Mason Cox, also known as Coxzilla, the only American to have huge success in the AFL, had a nail-biting, triumphant … final moment, walk-off win,’ he said on Tuesday’s edition of his Pat McAfee Show.

Clutching a Sherrin footy, McAfee hilariously provided his own commentary for what will go down as one of the greatest kicks to win a game in many years. 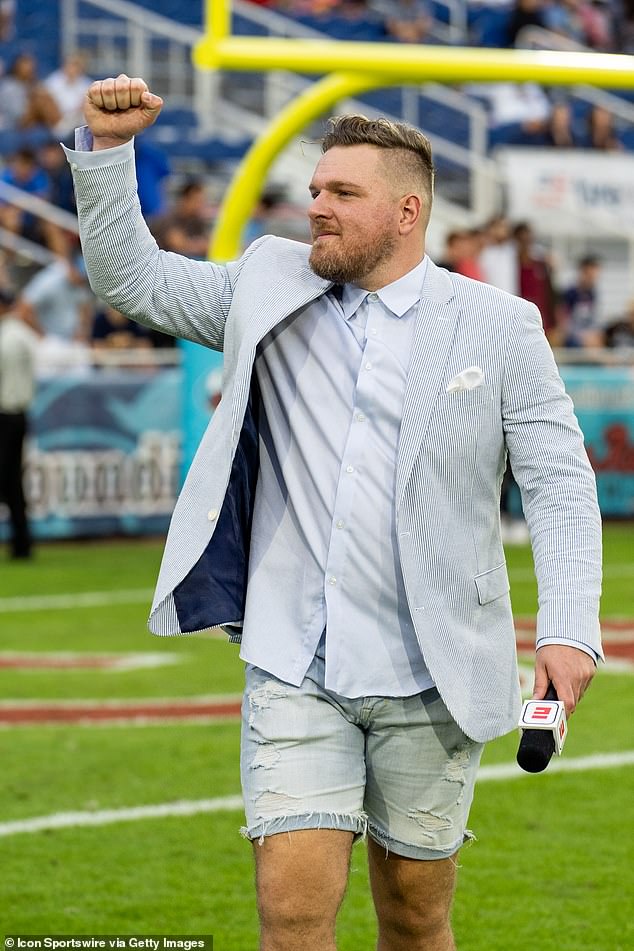 ‘In front of 75,000 on a terrible angle, the horn goes off in his backswing … and he put it through the pipes!’ yells McAfee.

‘That’s a walk-off winner from Jamie Elliott … He put this son of a b***h (the Sherrin) through those sons of b***hes (goalposts) from an incredibly hard angle.’

For those Aussies not as familiar with US sports terminology, a walk-off winner is essentially when a baseballer hits the winning run in the bottom of the last inning – though Elliott’s kick as the siren blew is a whole other layer of pressure. 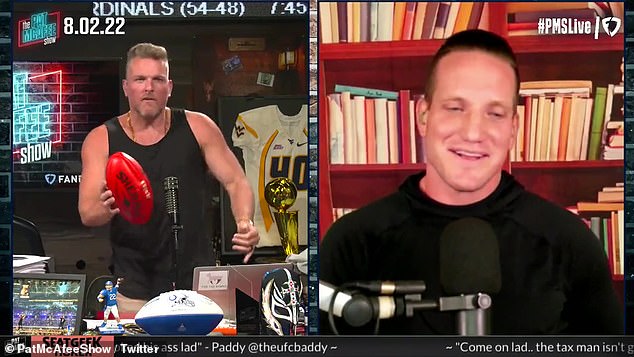 Pat McAfee (left) clutches a Sherrin, while he and fellow host AJ Hawk break down the incredible Collingwood win

McAfee saved his best work for his description of Aussie fans watching Elliott from just metres away on the other side of the fence.

He believed the supporters were using a swear word that is seen as much ruder in the US than it is Down Under.

‘Remember, in Australia they use that word differently. I’m just quoting these two people that are screaming in Jamie Elliott’s ear.’ 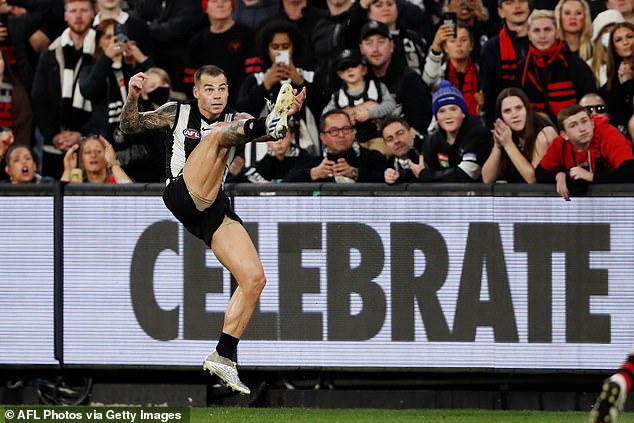 McAfee’s running commentary of the moment was pretty spot on when it came to grandeur and excitement, but the former punter might need a bit of work on his knowledge of Aussie Rules.

‘So the way you get the ball down the field is you run, you bounce and punt it ahead,’ he explained.

‘When somebody catches it they get all the time they need to line up a kick (at goal), or they can handpass it or punt it to someone else.’

He also said the mark Elliott took to set up the shot on goal was a ‘speccy’ when it was actually a run-of-the-mill grab. 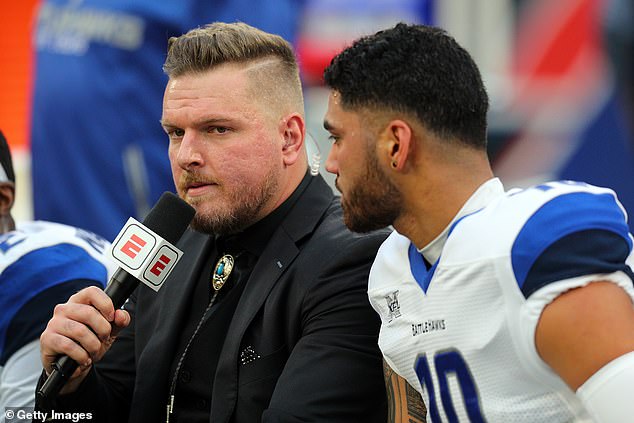 AJ Hawk, a Super Bowl-winning linebacker, pledged to be the show’s AFL correspondent after witnessing the unbelievable goal, and wondered why the game isn’t more popular around the world.

‘That kick from that angle seemed impossible, actually … why isn’t this bigger than soccer?’ he asked.

The clip caught the eye of fellow Yank and Collingwood star Mason Cox and Elliott himself, while Lions star Mitch Robinson said the praise was a ‘huge shout out’.

McAfee duly congratulated the Magpies forward on his amazing achievement, too.

How is this not a sport over there! thats huge shoutout

Cox even suggested the AFL would be much better placed if they could convince McAfee to get onboard for the finals series – a point that prominent journalist and broadcaster Craig Hutchinson heartily agreed with.

‘Australia needs to get this man and his crew back on board for finals (playoffs)! Getting him in town for a Grand Final would be dope too,’ wrote Cox on Twitter.

It wasn’t the first time McAfee has been exposed to Australian Rules. 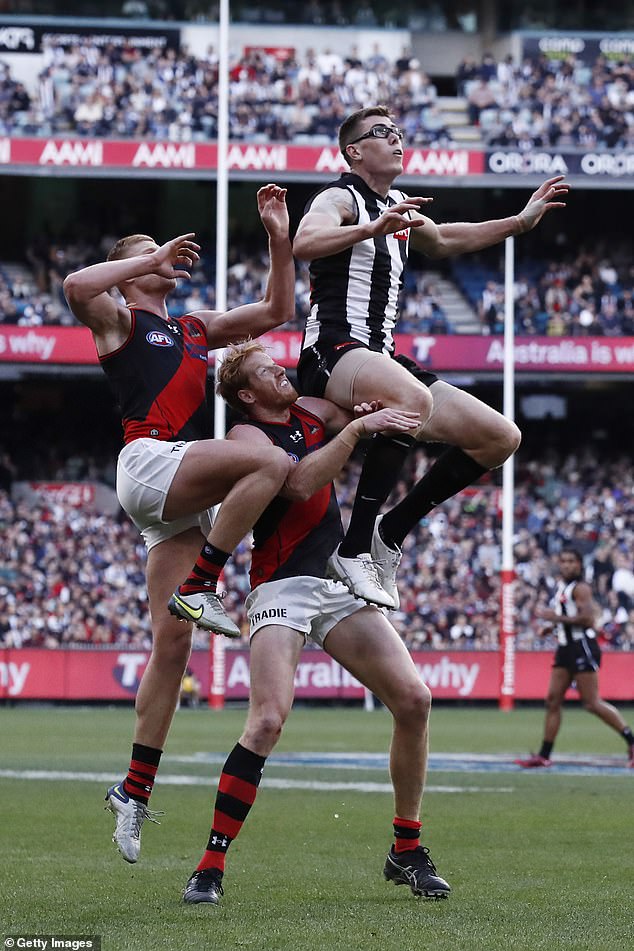 After discovering the game during the 2020 COVID lockdown, Cox hooked him up with his own personalised Sherrin and Magpies uniform.

He called it ‘the most insane sport on earth’ at the time, before lamenting this week that he wasn’t able to play it himself.

‘Aussie Rules football is the sport I wish I grew up playing,’ he said. 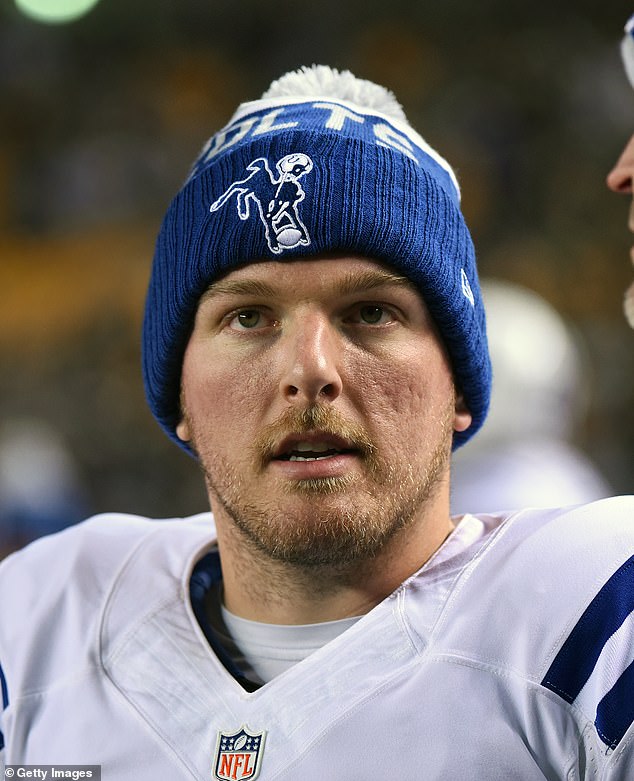 McAfee, a cult hero both on and off the field, was one of the best NFL punters of all-time before transitioning seamlessly into the media where his extroverted nature, booming voice and outlandish views have made him a hit with fans.

His show, which has more than 5.6million followers across YouTube, Twitter and Instagram, goes for three hours daily from Monday to Friday and is one of the most popular sporting programs in the US.