Royal fans begged the Duke of Sussex to ‘get a haircut’ after many were left stunned by his ‘scruffy’ mop and ‘fuzzy’ beard during his appearance at the UN in New York yesterday. Prince Harry, 37, who is currently living in his $14 million mansion in California having stepped back from royal duty, waded into US politics as he blasted the ‘rolling back of constitutional rights’ during his keynote speech at the UN General Assembly for Nelson Mandela Day.

Royal fans begged the Duke of Sussex,  37, to ‘get a haircut’ after many were left stunned by his ‘scruffy’ mop and ‘fuzzy’ beard during his appearance at the UN in New York yesterday

However it was his appearance which shocked many royal fans, who were critical of his messy ginger locks and lengthy facial hair. Posting on Twitter , one commented: ‘I wish Harry would have a decent haircut, he always looks scruffy.

Meanwhile another wrote: ‘Harry’s looking thrilled again. Why does he always look crumpled and scruffy?’.

A third added: ‘I think Harry’s largest offense is that haircut. Who’s he trying to fool? ‘Shave your head, dude, regardless of whatever you have to say, no one is going to take you seriously looking like a homeless clown.’

Another commented: ‘Harry needs a professional haircut and beard trim. Better yet, shave off all that nasty fuzz.’ 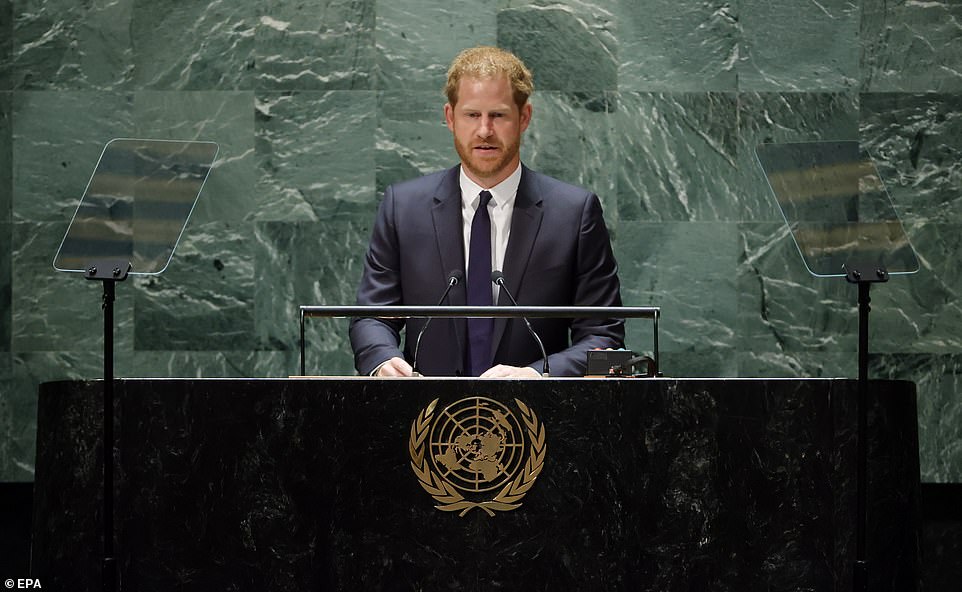 The Duke’s relaxed appearance was a stark contrast to his keynote speech at the UN General Assembly in which he blasted the Supreme Court’s decision to overturn Roe v. Wade as a ‘global assault on democracy and freedom.’ Despite the event meant to be in celebration of Nelson Mandela Day, the Prince launched an attack on American politics during his keynote speech. 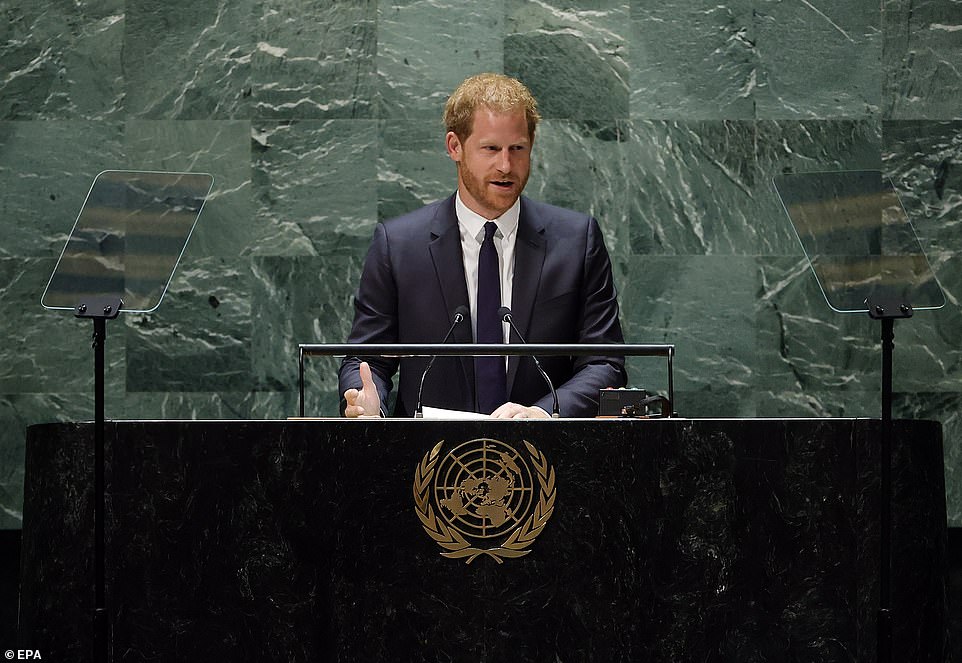 He said: ‘This has been a painful year in a painful decade. We are living through a pandemic that continues to ravage communities in every corner of the globe. ‘Climate change wreaking havoc on our planet with most vulnerable suffering most of all. The few weaponizing lies and disinformation at the expense of the many. ‘And from the horrific war in Ukraine to the rolling back of constitutional right in the US we are witnessing a global assault on democracy and freedom the cause of Mandela’s life.’ 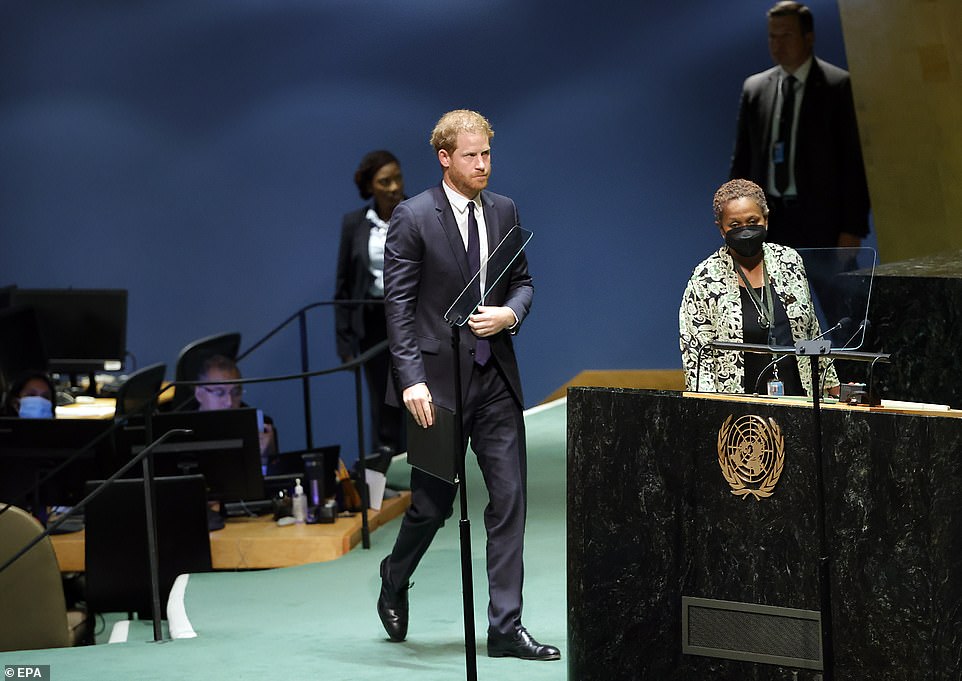 Harry also the blasted the ‘rolling back of constitutional rights’ and criticized SCOTUS for its decision to remove federal abortion protections. The comments, heard by a mostly-empty room at the United Nations on Monday morning, were the latest broadside at US politicians. They followed recent remarks by Meghan to Vogue magazine in which she, alongside famous feminist icon Gloria Steinem, urged men to be ‘more vocal’ with their anger about the decision to overturn Roe. 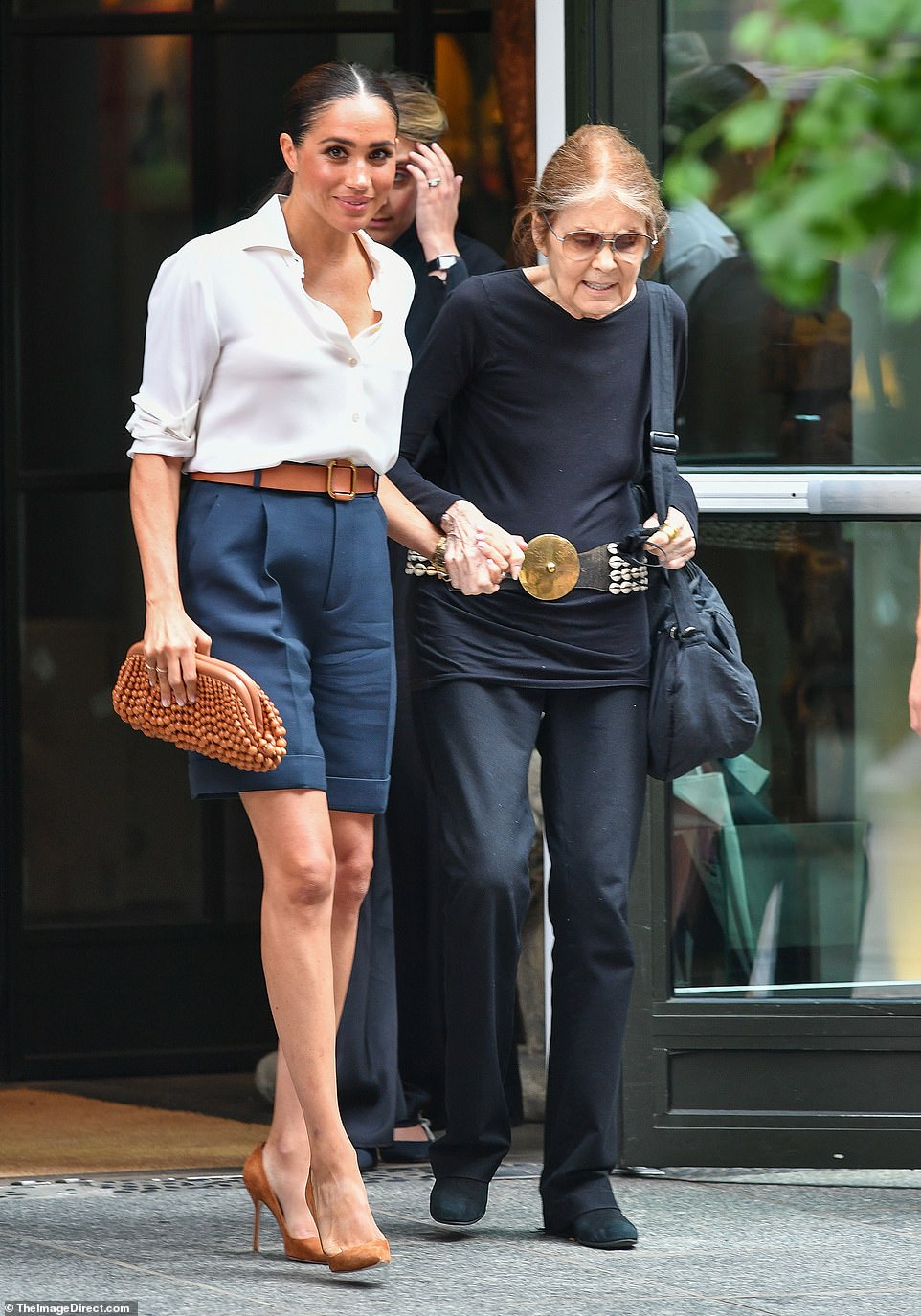 Steinem, who was spotted with the Duchess earlier Monday (pictured), has recruited Meghan in her fight to get Congress to ratify the Equal Rights Amendment – a proposed amendment to the United States Constitution designed to guarantee equal legal rights for all American citizens.

Monday was not the first time the Duke and Duchess of Sussex have waded into American politics. They found themselves in hot water after commenting on the US election during a Time 100 video in September 2020 when they called on American voters to ‘reject hate speech, misinformation and online negativity’ in ‘the most important election of our life.’ Members of the royal family are supposed to be politically neutral, when they stepped back from their roles the Sussex’s vowed that ‘everything they do will uphold the values of Her Majesty’.