Alex Brummer: The energy price cap that no longer fits

By Alex Brummer for the Daily Mail

Now we have heard it from the governor Andrew Bailey personally.

The reason the Bank of England’s inflation forecast has been so wrong, escalating from 4 per cent a year ago to a peak of 13.3 per cent this autumn, is down to the war on Ukraine and its impact on energy prices. No one, he says, could have foreseen that.

In response to the oil and gas price shock, regulator Ofgem is updating the operation of the price cap, which sets most household bills. 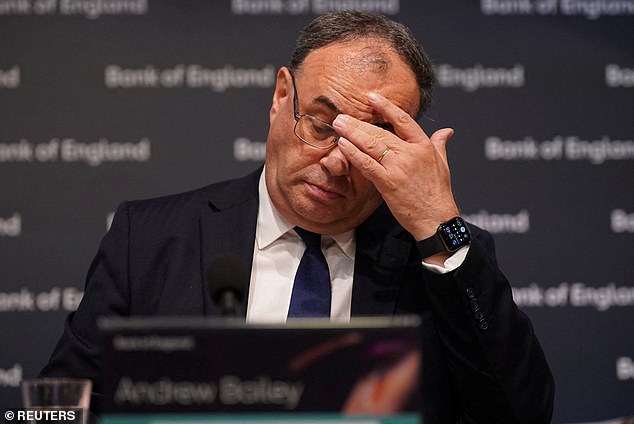 ‘Unforeseen circumstances’: Bank of England governor Andrew Bailey says the reason its inflation forecast has been so wrong is down to the war on Ukraine

The days when consumers could go to comparison sites and choose the cheapest offer are long gone.

Switching has become a dodgy business with some 30 energy suppliers, many badly run and weakly regulated, bust so far. Most customers have been moved on to other suppliers.

The new plan for Ofgem is to adjust the cap every three months instead of every half-year. In different circumstances this might have been popular with the consumer.

Instead of the so-called rocket-and-feather effect, with higher prices passed on immediately and lower prices delayed, there will be quicker pass-through of wholesale market changes.

Indeed, long before the Ukraine conflict Ofgem was discussing such a change and monthly changes were even contemplated.

The unfortunate implications of a three-month cap change at present is that consumers will face both an October and January increase.

No wonder angry households are signing up to the social media driven ‘Don’t Pay UK’ movement.

It is difficult to think that energy prices are moving anything but higher as Europe moves towards winter, demand becomes more intense and Vladimir Putin chooses to play hardball.

Even though the UK receives just 4 per cent of its energy from Russia – most of ours comes from Norway, the North Sea and Qatar – so far no one has devised a system which divorces us from the global markets.

With wholesale gas prices some seven times higher than a year ago, the residential cap is expected to be set 70 per cent higher at £3,359 in October, with another jump in January.

The pain will be appalling and no one should underestimate the impact on the poorest households. But as HM Treasury has pointed out, consumers are not being left without any help.

There is a direct payment of £1,200 available to the most vulnerable households and all of us are going to be given a £400 discount.

Should bills soar again in January no government will be able to resist digging deeper to help. In Europe ‘self-help’ has begun, with air conditioning units reset at higher temperatures, hot water thermostats turned down and lights switched off earlier in shops and offices. All of which will serve the carbon reduction agenda.

Prime ministerial favourite Liz Truss opposes the windfall tax on big oil’s cash machine. She may eventually be persuaded that recycling some of this cash to the least well off is the only sensible choice.

The tax could be reversed speedily if and when gas and fuel prices come off the boil.

When former Glencore chief executive Ivan Glasenberg declared that his commodity trading and mining group would not be following the example of other miners, such as Rio Tinto, by selling its coal assets, it looked a strange decision.

His argument was that it would be better for a recognised mining group to gradually and responsibly denude the assets in full public view rather than selling them to a third party out of sight and mind.

How smart that now looks. With energy in such short supply, coal prices have soared and almost half the group’s first half profits of £15.2billion have been generated by the black stuff.

Germany is among the countries that have reverted to burning coal.

The outcome for shareholders, who stayed loyal through Glencore’s immense ethical and legal difficulties, is a huge pay-out in dividends and buybacks worth £7billion for the year.

And prospects are good with the group’s exposure to sought after ‘green’ metals such as copper, cobalt, nickel and zinc. Quite a legacy for newish boss Gary Nagle.

Savers in BlackRock’s £8 trillion of funds could not but feel a little queasy by the decision to allow struggling crypto exchange Coinbase on to its Aladdin tech investment platform.

Not quite what might be expected of Larry Fink’s so-so politically correct approach to investing.