By Josh Alston and Steve Larkin For Australian Associated Press

The Australian Hockeyroos have entered the women’s gold medal hockey match at the Birmingham Commonwealth Games amidst a chorus of boos and have been branded ‘cheats’ after being handed victory by ‘amateur’ umpire’s decision.

Australia will play England for the gold medal on Sunday. however Hockeyroos star Rosie Malone can thank the universe after being gifted a second chance to sink India in a controversial penalty shootout win.

After scores were locked 1-1 at fulltime in Friday night’s semi-final, the Hockeyroos triumphed 3-0 in the shootout.

The shootout began in a blaze of controversy, with Australia’s Malone taking the first shot and missing.

But Malone was gifted a second attempt because the eight-second countdown clock on the scoreboard wasn’t working.

While the decision was correct to the letter of the law, it was a highly contentious decision given the point of the match and the stakes on the line.

‘That would be a national outrage if that happened to Australia,’ – Alastair Nichoson said on Channel 7. 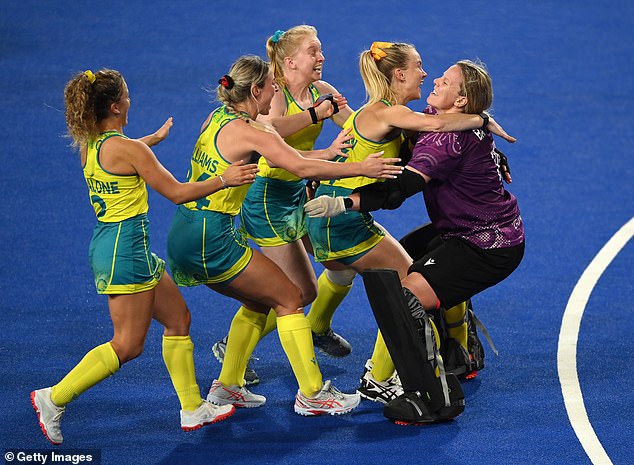 Fuming Indian fans took to social media to vent their frustrations and lashed the Hockeyroos as cheats while many Australian and neutral supporters suggested the Hockeyroos should have denied the second-chance shot.

An anonymous profile tweeted: ‘Only India suffers. I haven’t seen any other team suffering from such cheating or so called mistakes.’

“The final everybody wanted” – pathetic, biased BBC commentary throughout hockey at #CWG2022
Save but technical fault – was such a cruel way for penalty shootout to start for India v Aus. Still a fab performance, here’s the equaliser by Vandana Katariya. Can beat NZ and claim 🥉 pic.twitter.com/2snt1SqgtF

Malone said she was only focused on her team and victory in that moment.

‘When they called the retake, I was thanking the universe for a second chance,’ Malone said.

‘I knew all of India would hate me if I put it in.

‘But I was just trying to think about my team and that final and I said to myself ‘if I get a second chance at this, I’m not missing it’.

‘I felt for India at the time. But all our other girls got our shootouts in so it’s not like that one shootout was the be all and end all.’

It is another incident in a controversial games for Malone, who was branded sexist for filming a half-naked male athlete from her room while she also almost lost a finger in a gruesome hockey accident earlier this year.

India captain Savita Punia was shattered and on the verge of tears, but was graceful in defeat.

‘Such decisions are tough to take but it’s part of sport and you have to accept it.’

Meanwhile, England secured their spot in the final with 2-0 shootout triumph against New Zealand after a scoreless stalemate.

Sunday’s final will be the third time Australia have met England in the gold medal match – the Hockeyroos have won both and have four Commonwealth titles in the six completed editions of the Games. 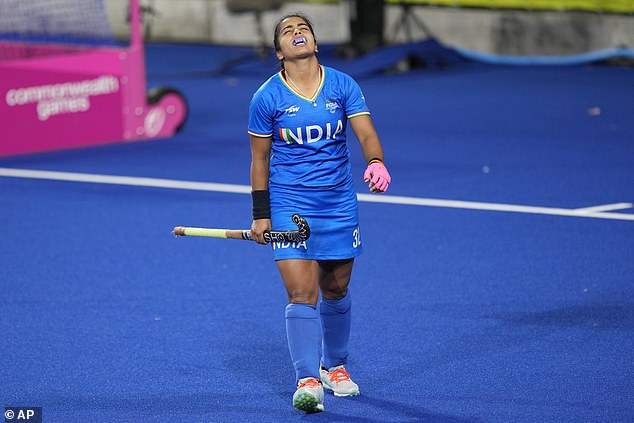 In Friday’s semi-final, the Australian exacted a semblance of belated revenge on the Indians for knocking them out of last year’s Tokyo Olympics at the quarter-final stage.

The Australians suffered an early blow when defender Karri Somerville was forced off seven minutes in when copping a nasty ricochet on her right cheekbone.

But just three minutes later, they struck when Mariah Williams darted along the left flank and launched a cross which was neatly deflected in by Greiner at the far post.

The scores remained 1-0 until, against the flow in the 49th minute, India equalised when Vandana Katariya deflected into the net from close-range – the first goal the Australians had conceded in the Games.