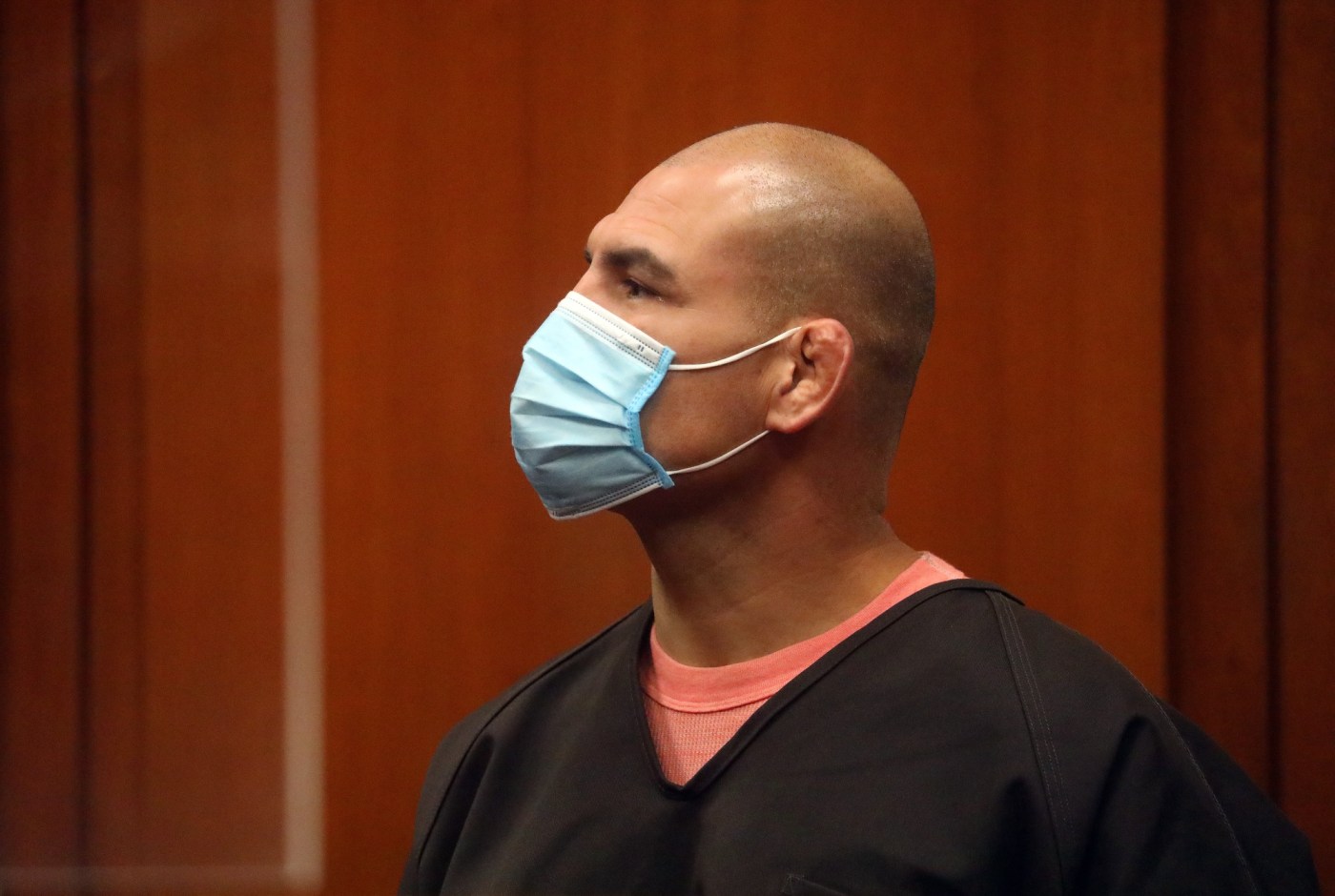 SAN JOSE — Former UFC fighter Cain Velasquez has formally pleaded not guilty to attempted murder, assault and weapons charges alleging that in February he chased then shot at a man accused of molesting his young son, and ended up wounding the man’s stepfather.

Velasquez entered the plea Friday in a San Jose courtroom accompanied by his attorneys Alexandra Kazarian and Renee Hessling, with several family members and supporters sitting in the court gallery.

A preliminary examination — the hearing in which a judge decides whether there is enough evidence for a case to proceed to trial — has been set for Sept. 26.

Velasquez, clad in brown jail clothing and wearing a surgical mask over his face, was visibly attentive during the hearing and stood up when telling Santa Clara County Superior Court Judge Jessica Delgado, “Yes I do” when she asked him to verify his plea and that he understood he was waiving his right to have the preliminary examination within 10 days.

He briefly gestured to his supporters before he was escorted back to the Main Jail in San Jose, where is he is being held without bail. His lead attorney Mark Geragos, who was not in court Friday, has petitioned the Sixth District Court of Appeal challenging the county Superior Court’s denial of bail to Velasquez.

Both the prosecution and court have cited public-safety concerns in opposing his release from jail. Geragos has repeatedly argued that high bail, electronic monitoring, and protective orders for the charged victims of the Feb. 28 shooting would be sufficient for securing safety and Velasquez’s court appearances.

He also proposed Velasquez go to an out-of-state rehabilitation facility, after characterizing the 40-year-old’s actions as a response to a family trauma worsened by a traumatic brain injury suffered from his mixed-martial arts career, during which he fought out of San Jose and won two UFC heavyweight title belts.

Judge Shelyna Brown rebuffed the jail alternatives Geragos offered, decisions that he called “unconstitutional” in his appeal, which as of Friday had not yielded a response from the appellate court.

According to police and prosecutors, on Feb. 28 Velasquez followed Paul Bender and Patricia Goularte as they drove from their home in San Martin to Morgan Hill, where they were going to pick up their son Harry Goularte Jr. and take him to San Jose to get outfitted for an ankle monitor.

Goularte Jr., 43, was charged in February with one felony count of a lewd and lascivious act with a child who has since been widely identified as Velasquez’s 4-year-old son. The child told his parents about being molested by Goularte Jr. at a home-based San Martin daycare run by his mother. Goularte Jr. was arraigned Feb. 25, and a judge granted him supervised release.

On Feb. 28, as Bender and Goularte met up with Goularte Jr. in Morgan Hill, Velasquez is alleged to have driven up to their vehicle and fired a handgun at him, then followed them as they drove away. The pursuit ended near Monterey Highway and Bailey Road on the southern edges of San Jose, where Velasquez reportedly fired several shots at the family, wounding Bender. Velasquez was arrested a short distance away by San Jose police.

During Friday’s hearing, prosecutor Aaron French sparred with Velasquez’s attorneys over their request for evidence and discovery from the Goularte case, which they said was important for them to mount an effective defense for Velasquez.

French argued the district attorney’s office had to selective about what information they could disclose to maintain the integrity of the separate prosecution.

“That case is an ongoing prosecution, an ongoing investigation,” French said.

He also affirmed that he did not intend to call Goularte as a witness in the prosecution of Velasquez, which he contends makes portions of what the defense is requesting irrelevant.

Hessling said that stance is “fundamentally a problem,” and that “a lot of what occurred is based on statements that Harry Goularte made to other individuals.”

“To say he should be completely excised from this equation and pretend he does not exist … is a fiction,” Hessling added. “It is fundamentally unfair to Mr. Velasquez. (Goularte’s) going to take a role and I think there are statements he made either to detectives or other percipient witnesses that need to explored by the defense.”

Delgado set an Aug. 29 court hearing to decide on the discovery matter.

In his bail appeal, Geragos seized on the prosecution’s plans to not call Goularte Jr. to testify in the Velasquez case. He said that combined with Bender and Patricia Goularte invoking their Fifth Amendment rights in a lawsuit that Velasquez filed against them and Goularte Jr. over the molestation allegations, the district attorney’s office does not have enough factual grounding to continue denying Velasquez bail.

French previously said in court that Geragos’ argument was speculative and conflated criminal and civil court procedures, and that any actions in the lawsuit have no bearing on the public-safety rationale cited by him and Judge Brown over the course of three bail hearings.

A preliminary examination for Goularte in the molestation case is scheduled for Sept. 20.