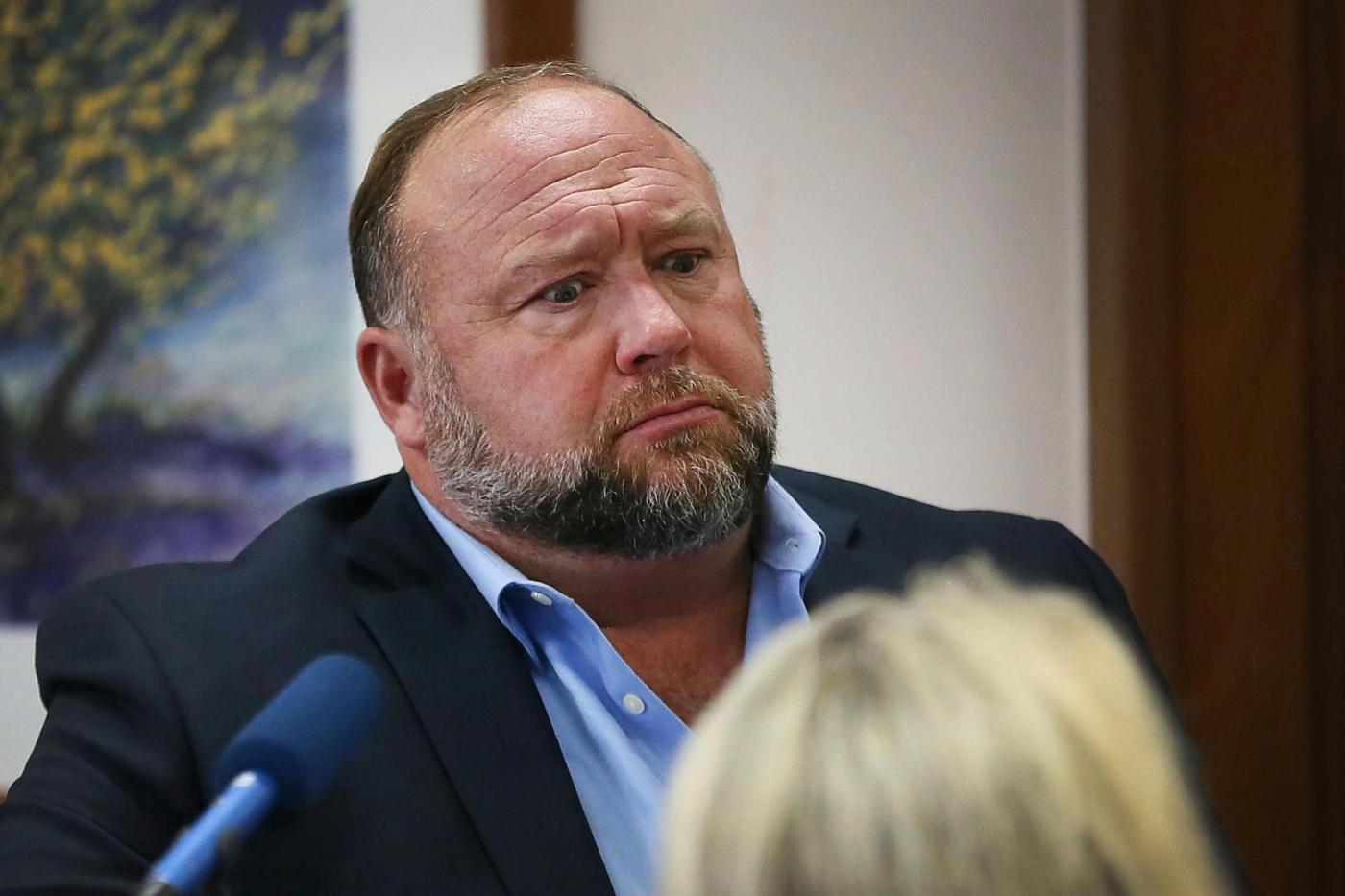 AUSTIN, Texas (AP) — A Texas jury on Friday ordered conspiracy theorist Alex Jones to pay $45.2 million in punitive damages to the parents of a child who was killed in the Sandy Hook Elementary School massacre, adding to the $4.1 million he must pay for the suffering he put them through by claiming for years that the nation’s deadliest school shooting was a hoax.

The total — $49.3 million — is less than the $150 million sought by Neil Heslin and Scarlett Lewis, whose 6-year-old son Jesse Lewis was among the 20 children and six educators killed in the 2012 attack in Newtown, Connecticut. But the trial marks the first time Jones has been held financially liable for peddling lies about the massacre, claiming it was faked by the government to tighten gun laws.

Afterward, Lewis said that Jones — who wasn’t in the courtroom to hear the verdict — has been held accountable. She said when she took the stand and looked Jones in the eye, she thought of her son, who was credited with saving lives by yelling “run” when the killer paused in his rampage.

“He stood up to the bully Adam Lanza and saved nine of his classmates’ lives,” Lewis said. “I hope that I did that incredible courage justice when I was able to confront Alex Jones, who is also a bully. I hope that inspires other people to do the same.”

It could be a while before the plaintiffs collect anything. Jones’ lead attorney, Andino Reynal, told the judge he will appeal and ask the courts to drastically reduce the size of the verdict.

After the hearing, Reynal said he thinks the punitive amount will be reduced to as little as $1.5 million.

Plaintiffs’ attorney Mark Bankston said he believes he can challenge any attempt to reduce the damages. But he said even if the award is drastically cut, it’s just as important to take the big verdict into the bankruptcy court for the family to claim against Jones’ estate and company.

Jones testified this week that any award over $2 million would “sink us.” His company Free Speech Systems, which is Infowars’ Austin-based parent company, filed for bankruptcy protection during the first week of the trial.

Punitive damages are meant to punish defendants for particularly egregious conduct, beyond monetary compensation awarded to the individuals they hurt. A high punitive award is also seen as a chance for jurors to send a wider societal message and a way to deter others from the same abhorrent conduct in the future.

Barry Covert, a Buffalo, New York, First Amendment lawyer with no connection to the Jones case, said the total damages awarded amount to “a stunning loss for Jones.”

“With $50 million in all, the jury has sent a huge, loud message that this behavior will not be tolerated,” Covert said. “Everyone with a show like this who knowingly tells lies — juries will not tolerate it.”

Future jurors in other pending Sandy Hook trials could see the damages amounts in this case as a benchmark, Covert said. If other juries do, Covert said, “it could very well put Jones out of business.”

Attorneys for the family had urged jurors to hand down a financial punishment that would force Infowars to shut down.

“You have the ability to stop this man from ever doing it again,” Wesley Ball, an attorney for the parents, told the jury Friday. “Send the message to those who desire to do the same: Speech is free. Lies, you pay for.”

An economist testified that Jones and the company are worth up to $270 million.

Bernard Pettingill, who was hired by the plaintiffs to study Jones’ net worth, said records show that Jones withdrew $62 million for himself in 2021, when default judgments were issued in lawsuits against him.

“That number represents, in my opinion, a value of a net worth,” Pettingill said. “He’s got money put in a bank account somewhere.”

But Jones’ lawyers said their client had already learned his lesson. They argued for a punitive amount of less than $300,000.

“You’ve already sent a message. A message for the first time to a talk show host, to all talk show hosts, that their standard of care has to change,” Reynal said.

Friday’s damages drew praise from the American Federation of Teachers union, which represented the teachers at Sandy Hook.

“Nothing will ever fix the pain of losing a child, or of watching that tragedy denied for political reasons. But I’m glad the parents of Sandy Hook have gotten some justice,” union President Randi Weingarten said in a tweet.

Lawyers for the Sandy Hook families suing Jones contend he has tried to hide evidence of his true wealth in various shell companies.

During his testimony, Jones was confronted with a memo from one of his business managers outlining a single day’s gross revenue of $800,000 from selling vitamin supplements and other products through his website, which would approach nearly $300 million in a year. Jones called it a record sales day.

Jones, who has portrayed the lawsuit as an attack on his First Amendment rights, conceded during the trial that the attack was “100% real” and that he was wrong to have lied about it. But Heslin and Lewis told jurors that an apology wouldn’t suffice and called on them to make Jones pay for the years of suffering he has put them and other Sandy Hook families through.

The parents told jurors they’ve endured a decade of trauma, inflicted first by the murder of their son and what followed: gunshots fired at a home, online and phone threats, and harassment on the street by strangers. They said the threats and harassment were all fueled by Jones and his conspiracy theory spread to his followers via Infowars.

A forensic psychiatrist testified that the parents suffer from “complex post-traumatic stress disorder” inflicted by ongoing trauma, similar to what might be experienced by a soldier at war or a child abuse victim.

Throughout the trial, Jones was his typically bombastic self, talking about conspiracies on the witness stand, during impromptu news conferences and on his show. His erratic behavior is unusual by courtroom standards, and the judge scolded him, telling him at one point: “This is not your show.”

The trial drew attention from outside Austin as well.

Bankston told the court Thursday that the U.S. House committee investigating the Jan. 6, 2021, insurrection at the U.S. Capitol has requested records from Jones’ phone that Jones’ attorneys had mistakenly turned over to the plaintiffs. Bankston later said he planned to comply with the committee’s request.

By Friday, Bankston said, he had “a subpoena sitting on my desk’ from the Jan. 6 committee. But he said he needed to “tamp down expectations” that it might reveal texts about the insurrection since it appears to have been scraped for data in mid-2020.

Bankston said he’s also had “law enforcement” interest in the phone data, but he declined to elaborate.

Last month, the House committee showed graphic and violent text messages and played videos of right-wing figures, including Jones, and others vowing that Jan. 6 would be the day they would fight for Trump.

The committee first subpoenaed Jones in November, demanding a deposition and documents related to his efforts to spread misinformation about the 2020 election and a rally on the day of the attack.