Some of the smallest businesses in England could see their annual water bills rise by up to 18 per cent from next year under new proposals by the industry regulator.

Ofwat has launched a consultation on plans to move from many regional price caps to a single England-wide cap, which would see water and waste water bills rise by 0.1 per cent on average for smaller firms.

The regulator stressed that the impact of the proposed changes would differ significantly from business to business. 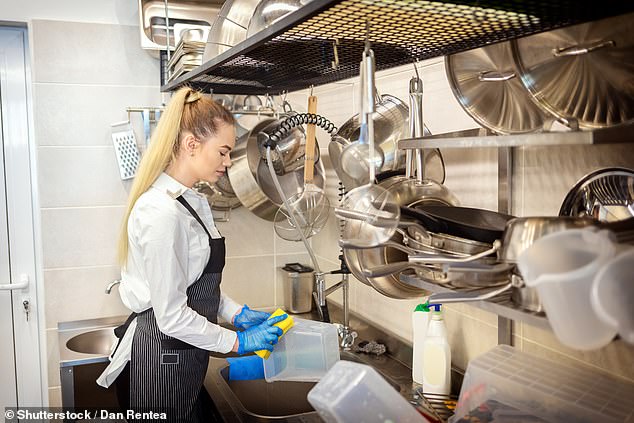 To help manage the impact on both retailers and business customers, Ofwat proposes to limit annual movements in bills – upwards or downwards – to around 5 per cent before inflation.

The water price cap review comes at a time when small businesses are wrestling with soaring energy bills and rampant inflation, with many fearing that sky-high energy bills could force them to close.

Businesses are not protected by an energy price cap.

However, some small firms are covered by the ‘Retail Exit Code’ price cap, which limits the maximum prices they can be charged for water when they fail to switch and end on default tariffs – or ‘deemed contracts’.

These caps were introduced in England in April 2017 when the water market was deregulated and 1.2million businesses were allowed to choose their supplier, whereas they previously they had to buy from their local supplier.

But there are currently over 50 separate price caps for small businesses in England and Ofwat wants to rationalise this to one cap for the whole of England.

Price caps apply only to small businesses with annual consumption less than 50 megalitre (Ml) – or 50 million litres – and the proposed changes will only apply to this group.

This is because Ofwat found evidence that smaller firms were not shopping around enough for better deals, leaving them at risk of being overcharged.

Its survey in January found that only 3.4 per cent of SMEs and 4 per cent of micro businesses switched suppliers in the previous year, compared to nearly 10 per cent of larger firms. 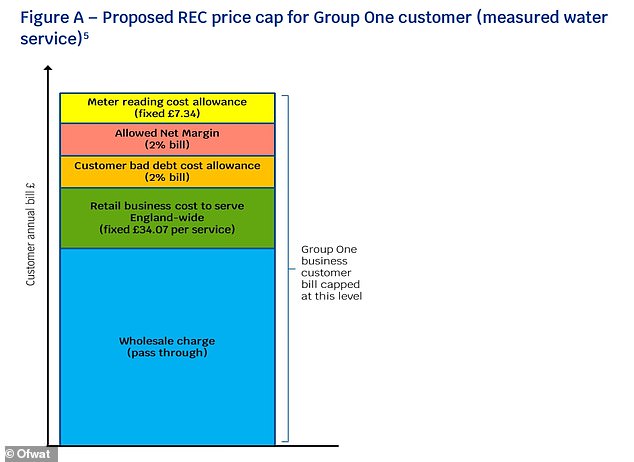 The chart shows how the price cap is calculated for Britain’s smallest firms under new proposals by Ofwat. It includes profit margins for water suppliers of up to 2%

Georgina Mills, business retail market director at Ofwat, said: ‘This is the first time we have done a thorough review of retail costs to serve smaller business customers.

‘Competition is working less well for smaller business customers, so our proposals aim to protect these customers whilst supporting a sustainable market where efficient retailers can earn a fair return.’

Larger firms that consume over 0.5Ml of water per year are not affected by the latest proposed changes, as Ofwat said they have shown to be more likely to switch to get the best deals.

These firms, however, face a 0.5 per cent increase in their price caps over the next two years under new rules announced in February.

The regulator said these ‘temporarily increases’ were aimed to allow water firms to share some of the bad debt-related costs they have incurred as a result of the pandemic.

Tina McKenzie, policy chair of the Federation of Small Businesses (FSB) said final decisions on water price caps ‘should now reflect that we are in a totally new economy, with no growth to help pay higher bills, and high inflation in business costs’.

She added: ‘With inflation driven by electricity and gas price hikes, we will need to keep a close eye on Ofwat’s regulated settlements with water companies and the prices they charge.

‘With CPI reaching 10 per cent or even, as some forecasters have suggested, 20 per cent – this cannot simply be added to bills.

‘We need utility companies to support small businesses as much as possible, more than ever.’