Tens of thousands of Russians cut off in Kherson, their artillery dwindling 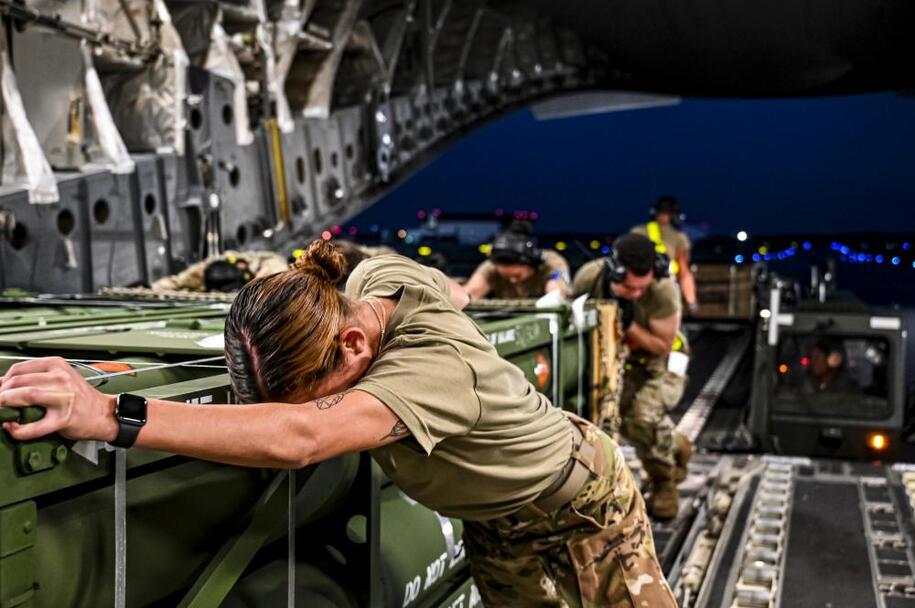 Woah, looks like they’re loading HIMARS/MLRS pods on planes. Given how quickly they’re fired, and how few fit on these planes, this shows the urgency of getting these to Ukraine. This is at Joint Base McGuire-Dix-Lakehurst (NJ).

NASA FIRMS data tells us what Ukraine is up to in Kherson Oblast. Take Nova Kakhovka, and Kherson city is fully isolated, while Crimea’s water is shut off. It’s THE play. pic.twitter.com/gAIbzaqoML

Taking Kherson city would likely be a bloody affair, decimating large parts of the city. Russia would then bombard the liberated city in retaliatory fury, giving it the Kharkiv treatment. What if, instead, Ukraine pushes hard to Nova Kakhhovka, which feeds Crimea’s water supply and is in the path of supply lines from both Crimea in the south and Russian-held territory in eastern Ukraine? On the way down they could liberate Beryslav, the location of one of those concentration camp “filtration centers.”

Indeed, there’s a reason Ukraine keeps hitting supply depots in Nova Kakhovka—because its major railway is a critical supply hub for Russia’s entire operation in the region. That’s why we get these sorts of attacks every day and night:

That explosion shattered windows at least a kilometer away. Do you know how much ammunition you need to make that happen? That’s a lot of explosive power that will no longer kill Ukrainians.

But that’s just the latest strike. Ukraine has been systematically degrading Russia ammunition stockpiles in the region, while simultaneously hitting the three bridges connecting the region on a daily basis. Yesterday and last night, the Antonovsky bridge got hit four times. Here are two of them:

So what does this mean? Think artillery shells and fuel—the two highest consumption items in Russia’s arsenal. Take away artillery and Ukraine can better move over Kherson’s flat, wide-open fields. That wastes fuel, and Russia won’t be able to maneuver its defenses, or retreat when the time comes. If all goes well, we could soon be seeing the return of Ukraine’s Tractor Brigade.

Look at how much space a single artillery 122mm shell takes in its packing:

Now multiply that unpacking by 10,000 a day, or more. Ukraine claimed that one point, Russia was firing upwards of 50,000 such shells a day. Even if it was half that in reality, it’s important to understand just how thirsty Russian artillery is. They can’t operate without it. Yet how are they going to transfer thousands of those shells to their troops in their field without bridges, without barges, and with limited fuel?

We’re only two days into this counteroffensive, and Russians already report artillery shortages. This is from the Telegram channel Grey Zone, catering to Wagner mercenaries. It mocks official Russian claims of massive Ukrainian casualties as believable only to those who “[do] not think.” And then it describes one Kherson battle:

We will talk about those who held back this offensive. About the guys who went to the task without a question, and were on one of the main directions of the breakthrough. A handful of commandos and paratroopers were jumped by 9 tanks, 7 infantry fighting vehicles and a horde of infantry. They held on ask best they could, even after the issues began with the requested artillery (there are more and more questions regarding the request—strike sequences, sending regards to aviation too). Yes, they did not all stay there, dying heroically and “destroying 500 enemy men and 50 tanks.”

That last line is meant sarcastically, again poking fun at the ridiculous casualty claims from the Russian side. But what’s salient is that Russian aviation is nonexistent, and they did not get any artillery support.

This Russian military reporter is also asking questions about the lack of artillery support:

1. How did the Ukrainians manage to secretly concentrate their forces?

2. Occupation of settlements.
After the front has stabilized, we spend weeks learning the name of the village that our troops are storming, but they immediately occupied the settlements.

3. We have figured it out with our aviation, but our artillery … However, I know the answer to this.

Obviously, Ukraine didn’t secretly concentrate their forces. They’ve been announcing this counteroffensive since June. Russia flooded forces into the region as a response to those announcements. So seriously, not sure what that guy is talking about.

The second likely means that it takes Russia weeks to take some small town, yet Ukraine has taken at least half a dozen, likely more, in just a couple of days.

But that last one, that last one is key. It’s always best when you read frustrated sarcasm into such statements. “We have figured it out with our aviation” means that they’ve come to expect nothing from it. It is nonexistent. But, he expected better from their artillery.

Want another sign of Russia’s artillery challenges in this theater? See this guy:

Expand video if you don’t see the subtitles. In it, he talks about the difficulty of crossing a mined field under fire from drone-dropped grenades. It’s not until 30 minutes into their crossing that Russia manages to fire some artillery and tank fire, which he says Ukraine immediately suppresses. Given the delay, I would even guess that they got hit with shorter-range mortars rather than Howitzer artillery. A properly supplied Russia would’ve been hitting the advance the second they set foot on that open field.

Whatever supply issues Russia is having at the moment, they’re only going to get worse as they burn through whatever ammo are currently sitting with line units. Then the question becomes whether to fight with waning supplies, or run. Check this out:

Here is the location of Arkhamhels’ke, at the very tippy top of Russian-held territory in Kherson Oblast. 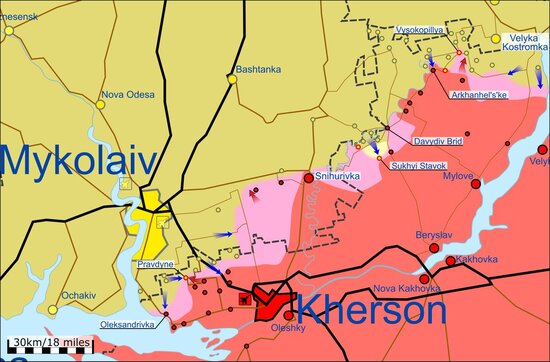 If you look at the video, there is no combat. Ukrainian forces (in this case, Chechen foreign fighters on Ukraine’s side) just strolled in. The video is two days old, from the first day of the counteroffensive, and there was simply no one there. Did Russian forces withdraw at the first sign of trouble, or had they already been gone? And at what point are Ukrainians going to hit resistance as they swoop down from the top?

That Russian Telegram post above talks about Russian paratroopers pulling out of somewhere. We don’t know where. All we know is that Ukrainian forces continue to advance, and most pro-Ukrainian OSINT (open-source intelligence) sites are honoring Ukrainian requests to keep a lid on updated progress maps.

One last (major) point before I wrap this up:

Zaporizhzhia
Out of bounds shellings in Zaporizhzhia. 3 russian shellings were reported south of the RU line of control.
Either the Russians shelled them selves, or the AFU advanced. I don’t think this was a mistake. pic.twitter.com/ayWfNFpKcl

Ohhhhhh this is good. It’s exactly what I wrote about here five weeks ago:

There is a highway that runs along that southern coast, but again, trucks aren’t helpful to Russia, not over those hundreds of kilometers. Their main way to move supplies [from the east]—rail lines—all converge at Tokmak (pop. 32,000 pre-war).

Tokmak! Tokmak is the only rail route running east to west in southern Ukraine. It wouldn’t just cut off Kherson area, but Melitopol as well (where Ukrainian underground resistance has been a hornet’s nest lately). Those towns listed above? They are only 20-25 kilometers from Tokmak, heading south.

Remember, Ukraine won’t announce the liberation of such villages. But by announcing Russian shelling of them, they are signaling that Ukrainian forces are occupying them. While all eyes are on Kherson, there is potentially a more important move happening in Zaporizhzhia. Put it all together and this is what’s happening, from the article linked above, written on July 21:

So we have a single rail line connecting Crimea to Kherson, and at Kherson, there is a single bridge left standing—the one Mark wrote about yesterday, Antonovsky Bridge. Ukraine has started shelling it, rendering large parts of the bridge unusable. It can be repaired, so Ukraine will need to keep hitting it, but it has shown an ability to do so at will.

If Ukraine takes that bridge out, Russia will be forced to move supplies from that Crimea-to-Kherson railhead 80 kilometers out to Nova Kakhovka, across the bridge there (which is also subject to attack), and back to supply Kherson. Meanwhile, if Ukraine cuts off Tokmak … you see where this is going? All Russian forces between Tokmak and Kherson will be effectively cut off. Trucks can only carry a fraction of rail capacity, and the roads will be swarming with Ukrainian partisans and special forces, exactly like they did early in the war around Sumy:

Yes, I’m feeling a little smug, but really, this wasn’t rocket science. The map is easy to read, there are only so many supply lines to Kherson, and it was easy to see how they would be cut. Ukraine doesn’t even need to liberate Tokmak, it is already close enough that regular artillery can cut the rail line. Maybe that’s what was literally happening last night:

What’s amazing is that Russia didn’t see the trap coming.

Ukraine has been announcing this counteroffensive precisely to lure reinforcements into the area, knowing how easy they could be cut off. I wasn’t the only person to see Russia’s predicament; it was well-discussed on OSINT Twitter. It was highly predictable. And yet here we are, with Russia seemingly being the only people unaware of the trap.

That Russian “military reporter” thinks Russia was unaware of secret Ukrainian forces? Heck no, that’s ludicrous. What Russia was unaware of was how easily their forces would be cut off, or they simply didn’t care. As a result, Kherson now hosts the largest concentration of Russian forces in the entire country, tens of thousands of them, thousands of pieces of equipment … and they are effectively cut off.

I did get one thing wrong in that block quote above: I thought Ukraine wouldn’t cut off the bridge at Nova Kakhovka, allowing continued resupply by truck. The bridge runs over a dam, and I feared the danger of busting the dam would prevent Ukraine from hitting it. Turns out Ukraine has been hitting the end points of the bridge, sparing the dam from damage. HIMARS’ accuracy allows for surgical precision. So not even trucks are getting across.

The Ukrainian offensive around Kherson has stalled because it cannot penetrate a wall of Russia artillery. Unmounted, unprotected infantry are too vulnerable to blast shrapnel. As we’ve seen, the terrain is basically Kansas: wide open fields with few places to take cover. This is where armor comes in. Armored personnel carriers can rush troops forward while protecting them from the shrapnel of exploding artillery. M113s won’t stop anti-tank missiles or Russian tank hits, but they are not designed to do that. They’re designed to offer soft protection.