A toaster-sized instrument on board NASA’s Perseverance rover is ‘reliably’ converting carbon dioxide into oxygen on Mars at about the same rate as a small tree on Earth, a new study has revealed.

The Mars Oxygen In-Situ Resource Utilization Experiment, or ‘MOXIE’, has been successfully making oxygen from the Red Planet’s CO2-rich atmosphere since February 2021, when Perseverance first touched down on the Martian surface.

Now a new study published in the journal Science Advances shows that MOXIE is able to produce oxygen in a variety of atmospheric conditions – including during the day and night – and through different Martian seasons.

On each of seven experimental runs, the instrument reached its target of producing six grams of oxygen per hour – about the same rate as a modest tree on Earth.

Researchers envision that a scaled-up version of MOXIE could be sent to Mars ahead of a human mission, to continuously produce oxygen at the rate of several hundred trees.

At that capacity, the system should generate enough oxygen to both sustain humans once they arrive, and fuel a rocket for returning astronauts back to Earth. 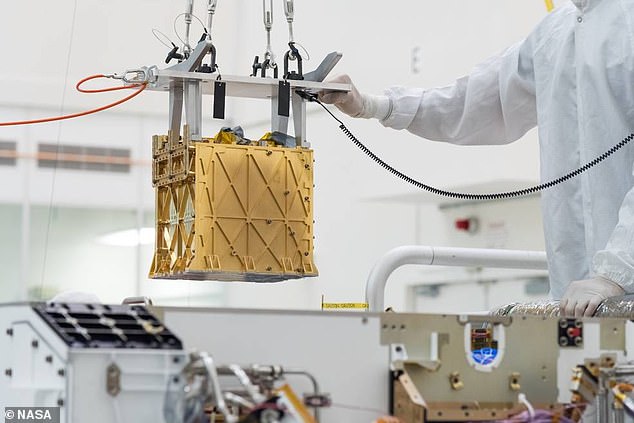 The Mars Oxygen In-Situ Resource Utilization Experiment, or ‘MOXIE’, has been successfully making oxygen from the Red Planet’s CO2-rich atmosphere since February 2021 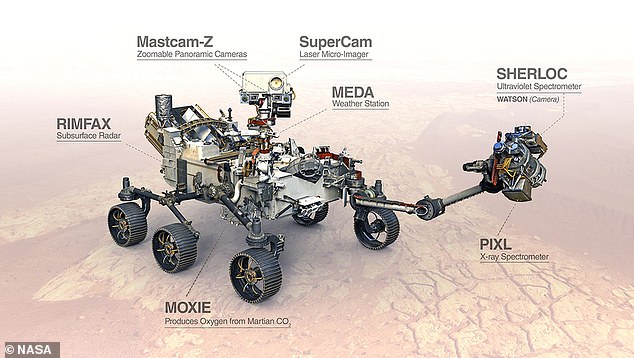 The current version of MOXIE is small by design, in order to fit aboard Perseverance, and is built for short periods, starting up and shutting down with each run, depending on the rover’s exploration schedule and mission responsibilities

Mars is the fourth planet from the sun, with a ‘near-dead’ dusty, cold, desert world with a very thin atmosphere.

Mars is also a dynamic planet with seasons, polar ice caps, canyons, extinct volcanoes, and evidence that it was even more active in the past.

It is one of the most explored planets in the solar system and the only planet humans have sent rovers to explore.

One day on Mars takes a little over 24 hours and a year is 687 Earth days.

Harvesting and using a planet’s materials, such as CO2, to make oxygen or other resources that would otherwise have to be transported is known as ‘in-situ resource utilisation’.

‘This is the first demonstration of actually using resources on the surface of another planetary body, and transforming them chemically into something that would be useful for a human mission,’ said MOXIE deputy principal investigator Professor Jeffrey Hoffman, from MIT’s Department of Aeronautics and Astronautics.

‘It’s historic in that sense.’

The current version of MOXIE is small by design, in order to fit aboard Perseverance, and is built for short periods, starting up and shutting down with each run, depending on the rover’s exploration schedule and mission responsibilities.

In contrast, a full-scale oxygen factory would include larger units that would ideally run continuously.

Despite the necessary compromises in current design, the instrument has shown it can reliably and efficiently convert Mars’ atmosphere into pure oxygen.

It does so by first drawing the Martian air in through a filter that cleans it of contaminants.

The air is then pressurised, and sent through the Solid Oxide Electrolyzer (SOXE), an instrument developed and built by OxEon Energy, that electrochemically splits the carbon dioxide-rich air into oxygen ions and carbon monoxide.

The oxygen ions are then isolated and recombined to form breathable, molecular oxygen, or O2, which MOXIE then measures for quantity and purity before releasing it harmlessly back into the air, along with carbon monoxide and other atmospheric gases.

Since the rover’s landing, MOXIE engineers have started up the instrument seven times throughout the Martian year, each time taking a few hours to warm up, then another hour to make oxygen before powering back down.

Each run was scheduled for a different time of day or night, and in different seasons, to see whether MOXIE could accommodate shifts in the planet’s atmospheric conditions.

‘The atmosphere of Mars is far more variable than Earth,’ said Professor Hoffman.

‘The density of the air can vary by a factor of two through the year, and the temperature can vary by 100 degrees. One objective is to show we can run in all seasons.’

So far, MOXIE has shown that it can make oxygen at almost any time of the Martian day and year.

‘The only thing we have not demonstrated is running at dawn or dusk, when the temperature is changing substantially,’ said Michael Hecht, principal investigator of the MOXIE mission at MIT’s Haystack Observatory.

‘We do have an ace up our sleeve that will let us do that, and once we test that in the lab, we can reach that last milestone to show we can really run any time.’

As MOXIE continues to churn out oxygen, engineers plan to push its capacity, and increase production, particularly in the Martian spring, when atmospheric density and carbon dioxide levels are high. 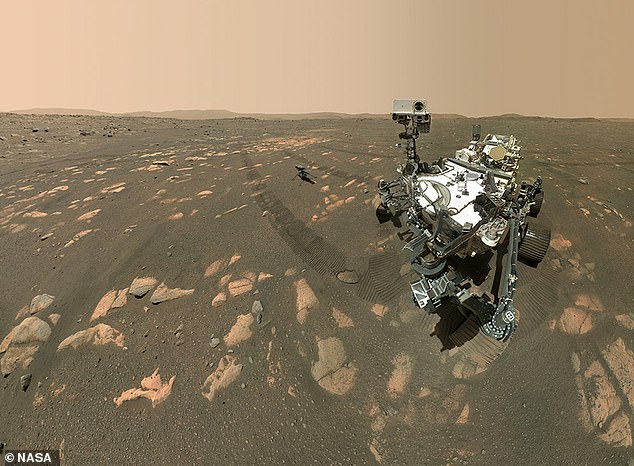 Since the rover’s landing, MOXIE engineers have started up the instrument seven times throughout the Martian year, each time taking a few hours to warm up, then another hour to make oxygen before powering back down

Forget growing potatoes! ALFALFA may be the key to farming on Mars

If humankind is to one day make the interplanetary jump from Earth to Mars, then the ability to grow food will be vital.

See also  How does the iPhone 14 stack up against its Android competitors?

Now US scientists have discovered that alfalfa plants may be the key to growing healthy vegetables on the red planet.

They found that alfalfa grows well in a volcanic soil that mimics Martian regolith, and that the alfalfa could then be turned into fertiliser to help grow turnips, radishes and even lettuce.

The researchers also used a marine bacteria to remove salt from briny water.

Together, they say this shows that it is possible to use the resources on Mars to farm and grow plants and sustain human missions and permanent settlements.

Dr Hecht said: ‘The next run coming up will be during the highest density of the year, and we just want to make as much oxygen as we can. So we will set everything as high as we dare, and let it run as long as we can.’

They will also monitor the system for signs of wear and tear. MOXIE is just one experiment among several aboard Perseverance. It cannot run continuously as a full-scale system would.

Instead, it must start up and shut down with each run – a thermal stress that can degrade the instrument over time.

If MOXIE can operate successfully despite repeatedly turning on and off, this would suggest that a full-scale system, designed to run continuously, could do so for thousands of hours.

Prof Hoffman said: ‘To support a human mission to Mars, we have to bring a lot of stuff from Earth, like computers, spacesuits, and habitats.

‘But dumb old oxygen? If you can make it there, go for it – you are way ahead of the game.’

The research was supported, in part, by NASA.

Last week Portuguese scientists came up with a new plasma-based technique to produce and separate oxygen within the Martian environment.

Plasma is the fourth natural state of matter, alongside solids, liquids and gases.

It contains free charge particles such as electrons, which are light and easily accelerated up to very high energies with electric fields. 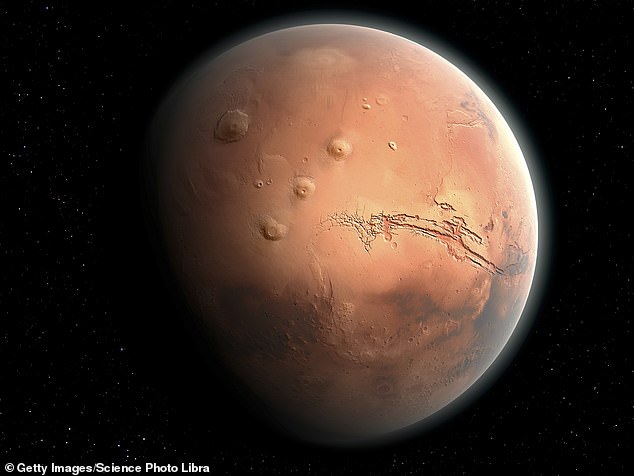 Mars’ atmosphere is primarily made up of carbon dioxide, which can be split to produce oxygen and carbon 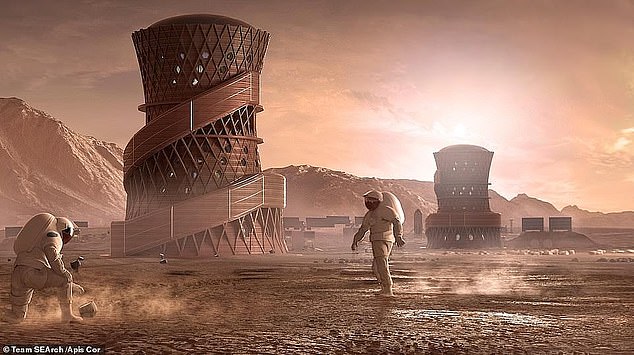 The system could not only play a key role in developing life-support systems, but could also be used to process fuels, and create building materials and fertilisers on Mars

‘When bullet-like electrons collide with a carbon dioxide molecule, they can directly decompose it or transfer energy to make it vibrate,’ Dr Guerra said.

‘This energy can be channelled, to a large extent, into carbon dioxide decomposition.

The oxygen produced via this plasma-based technique could be key to creating a breathable environment for settlers.

It could also be used as a starting point to produce fuels and fertilisers, allowing settlers to grow crops on the Martian surface.

NASA MARS 2020: PERSEVERANCE ROVER AND INGENUITY HELICOPTER ARE SEARCHING FOR LIFE ON THE RED PLANET

NASA’s Mars 2020 mission was launched to search for signs of ancient life on the Red Planet in a bid to help scientists better understand how life evolved on Earth in the earliest years of the evolution of the solar system.

Named Perseverance, the main car-sized rover is exploring an ancient river delta within the Jezero Crater, which was once filled with a 1,600ft deep lake.

It is believed that the region hosted microbial life some 3.5 to 3.9 billion years ago and the rover will examine soil samples to hunt for evidence of the life.

Perseverance landed inside the crater and will slowly collect samples that will eventually be returned to Earth for further analysis.

A second mission will fly to the planet and return the samples, perhaps by the later 2020s in partnership with the European Space Agency.