Will Lord Of The Rings: The Rings Of Power be a platinum selling blockbuster?

For anyone wondering what an £850 million windfall might buy, streaming service Amazon may well have the answer – but only time will tell if the biggest gamble in their 28-year history pays off.

With close to a billion spent on visual effects, casting, costumes and location shoots, the eagerly anticipated Lord Of The Rings: The Rings Of Power – a prequel to Peter Jackson’s hugely popular film franchise –  is set to launch on September 1, making it the most expensive TV show of all time.

It will herald a Middle-Earth set more than a 2000 years before Frodo Baggins’ fabled journey from The Shire, with a new range of characters inhabiting a world centuries before the comparatively civilised settings laid out in author JRR Tolkien’s 1937 novel The Hobbit and his subsequent Lord Of The Rings trilogy – The Fellowship Of The Ring, The Two Towers and Return Of The King.

Unlike the broad landscape of source material plundered by Jackson in his film adaptations of Tolkien’s work, producers J. D. Payne and Patrick McKay have created a potential – and highly ambitious – five season run based entirely on the author’s original appendices and footnotes. 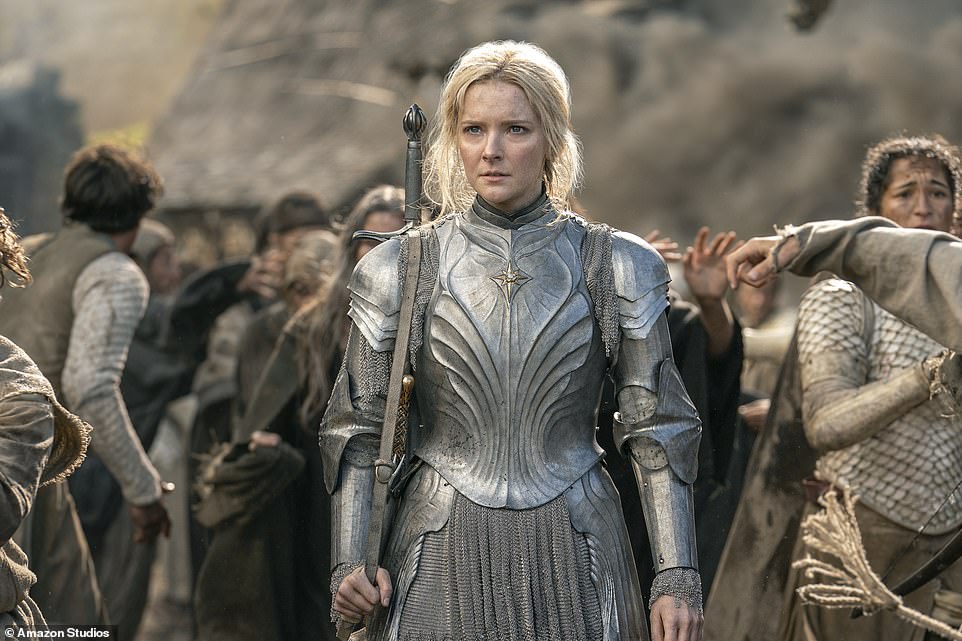 Coming soon: For anyone wondering what an £850 million windfall might buy, streaming service Amazon may well have the answer – but only time will tell if the biggest gamble in their 28-year history pays off

Quite a challenge, but with an enormous outlay from the Jeff Bezos managed Amazon – whose decision to own the book rights alone cost a staggering $250 million – the previously unseen second age of Middle Earth has been lovingly created, and with it the introduction of dark lord Sauron and the forging of the Rings Of Power.

But what else can fans expect from a series upon which the future of a multi-billion company may well hinge? Well, not much in terms of familiarity – with Sir Lenny Henry the only instantly recognisable actor among a cast of comparative unknowns.

The actor and comedian, whose career began five decades ago in the anarchic, custard pie fueled Tiswas studio, will play Sadoc Burrows, a Harfoot elder described by Henry as “the traditional Tolkien little guy… the little people in this world provide comedy but also get to be incredibly brave”.

He will be joined by an ensemble cast hoping to establish themselves as household names over the coming weeks – among them Cynthia Addai-Robinson as Númenor Queen Regent Míriel, Robert Aramayo as the half-Elven Elrond, and Owain Arthur as Dwarven prince Durin IV. 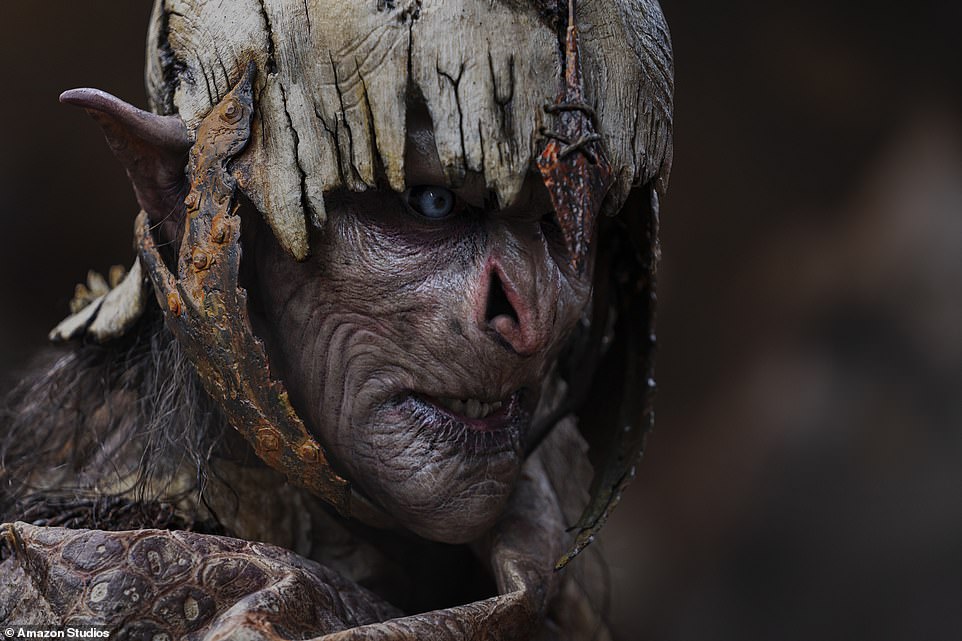 All change: It will herald a Middle-Earth set more than a 2000 years before Frodo Baggins’ fabled journey from The Shire, with a new range of characters inhabiting a world centuries before the events of The Hobbit and The Lord Of The Rings 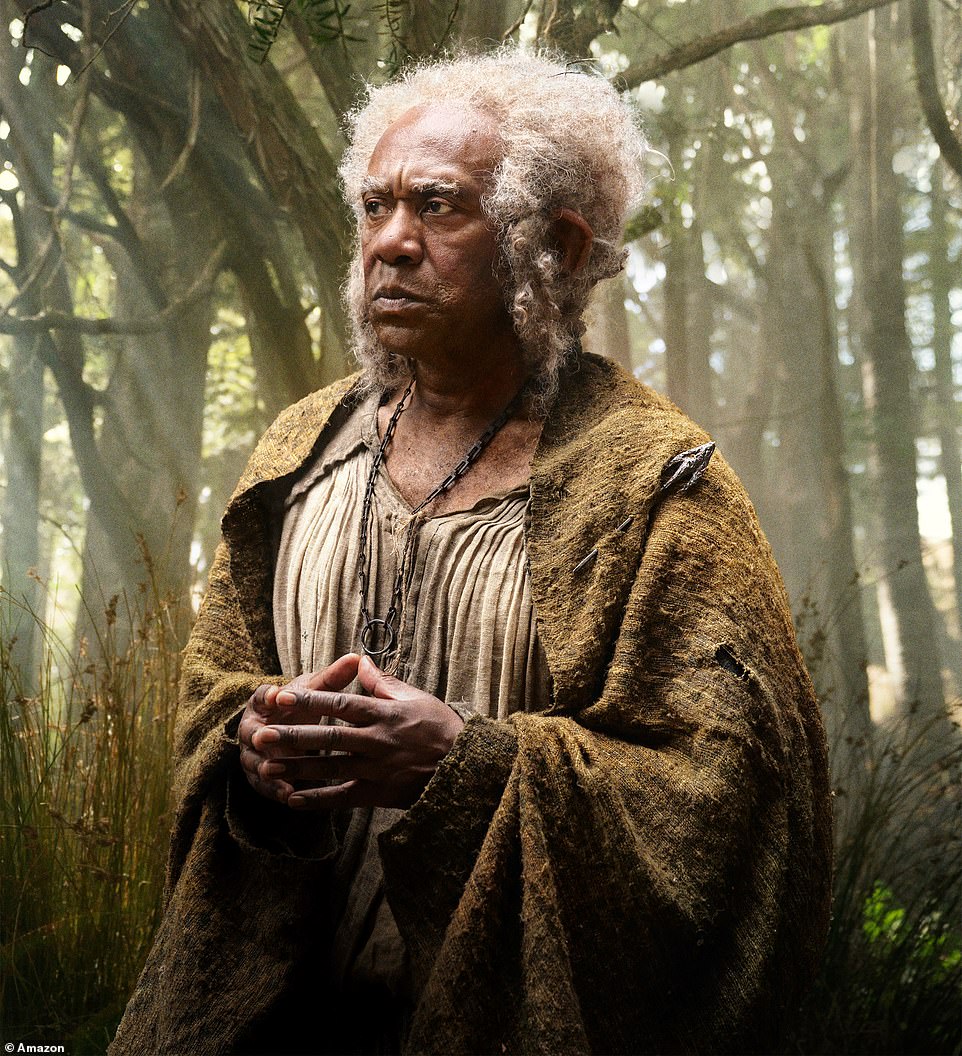 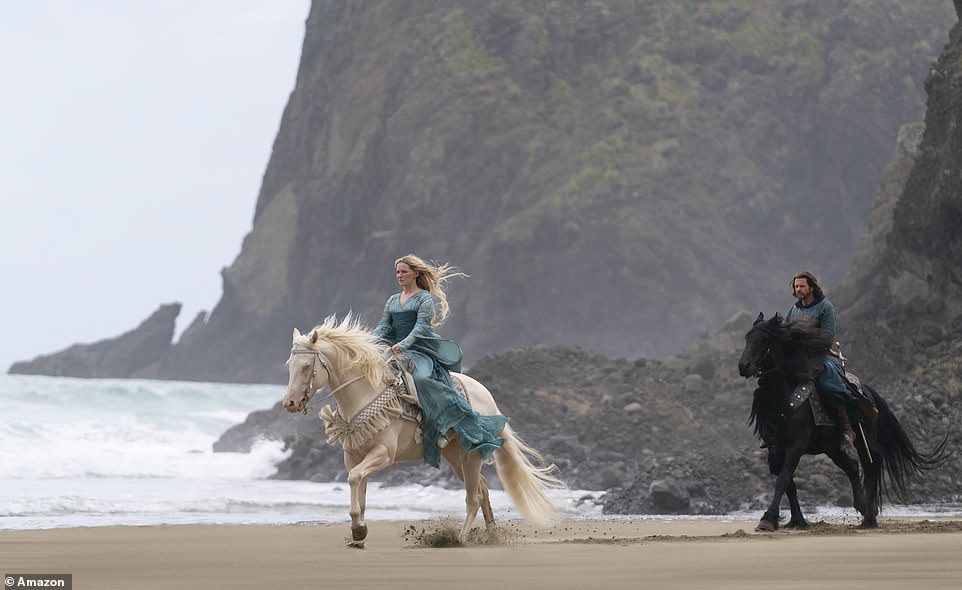 Galloping to success? Unlike the broad landscape of source material plundered by Peter Jackson in his film adaptations of Tolkien’s work, producers J. D. Payne and Patrick McKay have created a five season run based entirely on the author’s original appendices and footnotes (pictured: Morfydd Clark as Galadriel and Lloyd Owen as Elendil)

Taking another of the show’s more significant roles, Morfydd Clark will play Elven warrior Galadriel, and she admits it gave her the opportunity to explore stunts that show off the power of her character behind the backdrop of a historically male-dominated society.

She told Press Association: ‘Gender just isn’t the same in Middle-earth in that I’m playing a character who can physically take down any man around her. It was really interesting to try to embody someone with a huge amount of physical strength.’

Co-executive producer Patrick McKay said Tolkien has had “some of the greatest female characters in literature” and Galadriel was one of the first characters the creators thought about for the new story.

‘Imagining what her world was like and what she might have been struggling with from clues throughout the text was really a joy,’ he explained. 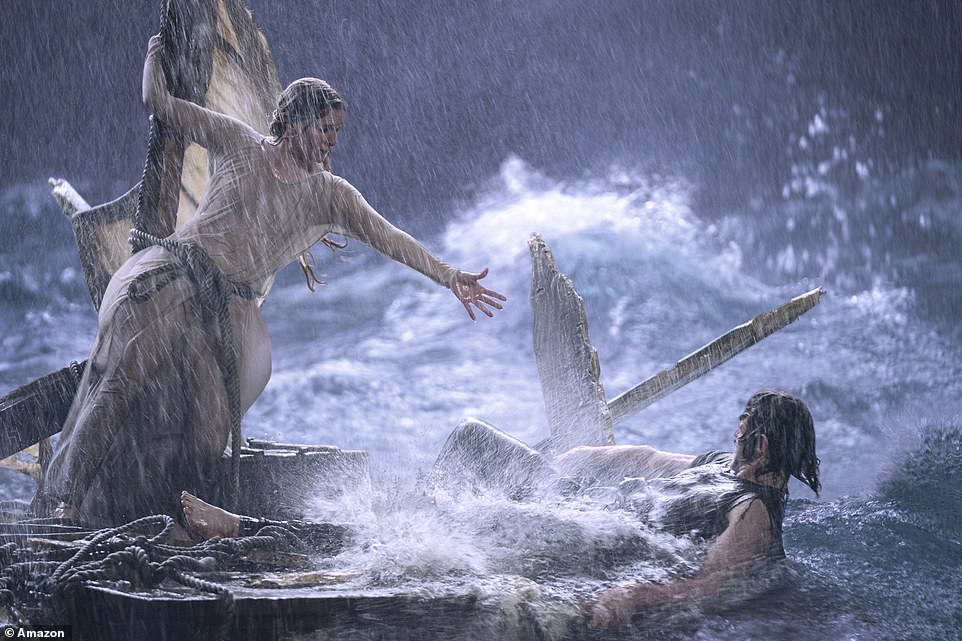 Exciting: The hour-long episodes are understood to be stuffed with action and humour, but the first 50-hours will be used to to explore the show’s nuanced characters and complex histories (pictured: Morfydd Clark as Galadriel and Charlie Vickers as Halbrand)

The old enemy: There will be plenty of Orks on show in the new series, but at £850million is it too much of a gamble for the Jeff Bezos owned Amazon? 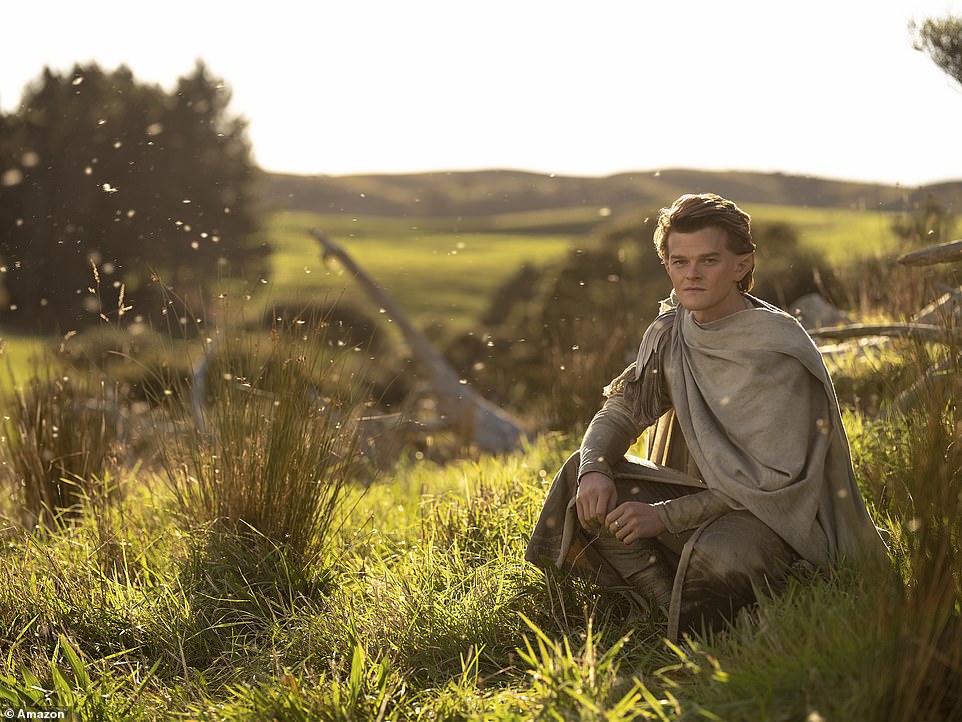 New star: Spanish actor will be hoping to make a name for himself as the half-Elven Elrond (pictured) in Lord Of The Rings: The Rings Of Power

The series is based, albeit loosely, on Tolkien´s writings and asides about Middle-earth´s Second Age, which preceded the Third Age´s Lord of the Rings and Hobbit films and books, with the late author’s own grandson, Simon Tolkien, serving as a creative consultant.

‘We say Tolkien sort of left a series of stars in the sky. Our job was to connect the dots and form the constellation and then sort of draw in between the constellations to give a little more specificity to it,’  said showrunner and executive producer Payne.

The hour-long episodes are understood to be stuffed with action and humour, but Payne and McKay plan to use a 50-hour canvas to explore their nuanced characters and complex histories, with the first eight episodes acting as an appetiser of sorts.

Meanwhile cast – a massive ensemble of 22 actors – is multiethnic and composed of actors of different ages and fame, from Tony-nominated Benjamin Walker to up-and-coming Charlie Vickers, who graduated from drama school in 2017. 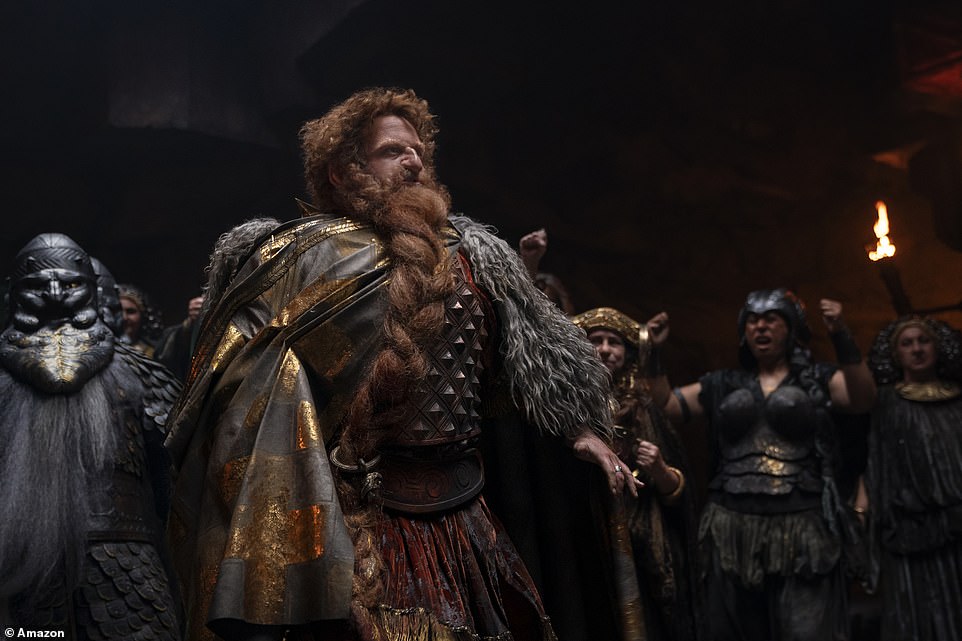 New role: Welsh star Owain Arthur will play Dwarven prince Durin IV (pictured) in the new show, the most expensive of all time

The Lord of The Rings: The King of Power: What did the critics say?

The visual splendour of this rich, gorgeous Tolkien drama will make you gawp throughout it makes House of Dragon look amateur.

I love Galadriel (Morfydd Clark) the fighter. She is valiant, flawed and haughty, as bloody-minded as she is brilliant, scarred by the horrors of war.

This is enormously enjoyable TV, a cinematic feast.

Amazon’s prequel is kind of a catastrophe.

It takes six or seven things everyone remembers from the famous movie trilogy, adds a water tank, makes nobody fun, teases mysteries that aren’t mysteries, and sends the best character on a pointless detour.

The Lord of the Rings: The Rings of Power sets out its sprawling epic fantasy credentials right from the off: even its title seems like it could be split into multiple instalments.

While The King Of Power might be a brand new story, it still has plenty of authentic Tolkienesque charm to go along with the best production value money can buy.

From this prelude onward, The Rings of Power narrative adopts a solemn and awestruck approach.

The first two episodes are admirably concise and compelling in their introductions.

Lavish and sweeping, The Rings Of Power puts its money where its mouth is.

The immensely fun Dwarves are Scottish-tinged and larger than life, canny and caring all at once.

It might take a second to get accustomed to these new characters, but the signs are that it will be worthwhile.

‘Don’t the great tales never end?’ asks hobbit Samwise Gamgee during a slower moment in The Lord Of The Rings. He’s talking about his own journey through J. R. R. Tolkien’s epic fantasy world – but he might as well be referring to the franchise itself.

As a start, this is an excellent one.

Despite the inventiveness that the creators have had to deploy to populate Tolkien’s world with fresh, non-canonical characters, the whole thing has the vibe of terrified executives carrying an exceedingly expensive vase across a slippery floor.

Perhaps two episodes aren’t enough to judge, and we are indeed gearing up for the greatest and most gripping fantasy TV series ever made. But I’m certainly not there yet.

I’ve got a pretty good inkling of how Amazon is hoping to make its money back. By flogging thousands of expensive big screen TVs – so viewers can truly appreciate the full cinematic wonder of this J.R.R. Tolkien masterpiece.

The special effects in this prequel could very well blow his Peter Jackson’s pair of Tolkien trilogies out of the water – and that’s before we’ve even seen the most spectacular of the promised battle scenes.

It’s ok but not wizard.

It is the beautiful New Zealand scenery, intricate sets and fantastical costumes that are a major highlight of the first two episodes. They are a happy distraction from the plot and characters, which come thick and fast.

The history behind this series is rushed through at such a pace only JRR Tolkien devotees could properly keep up.

What is clear, though, is that Amazon Prime Video has found someone truly precious in lead actress Morfydd Clark. 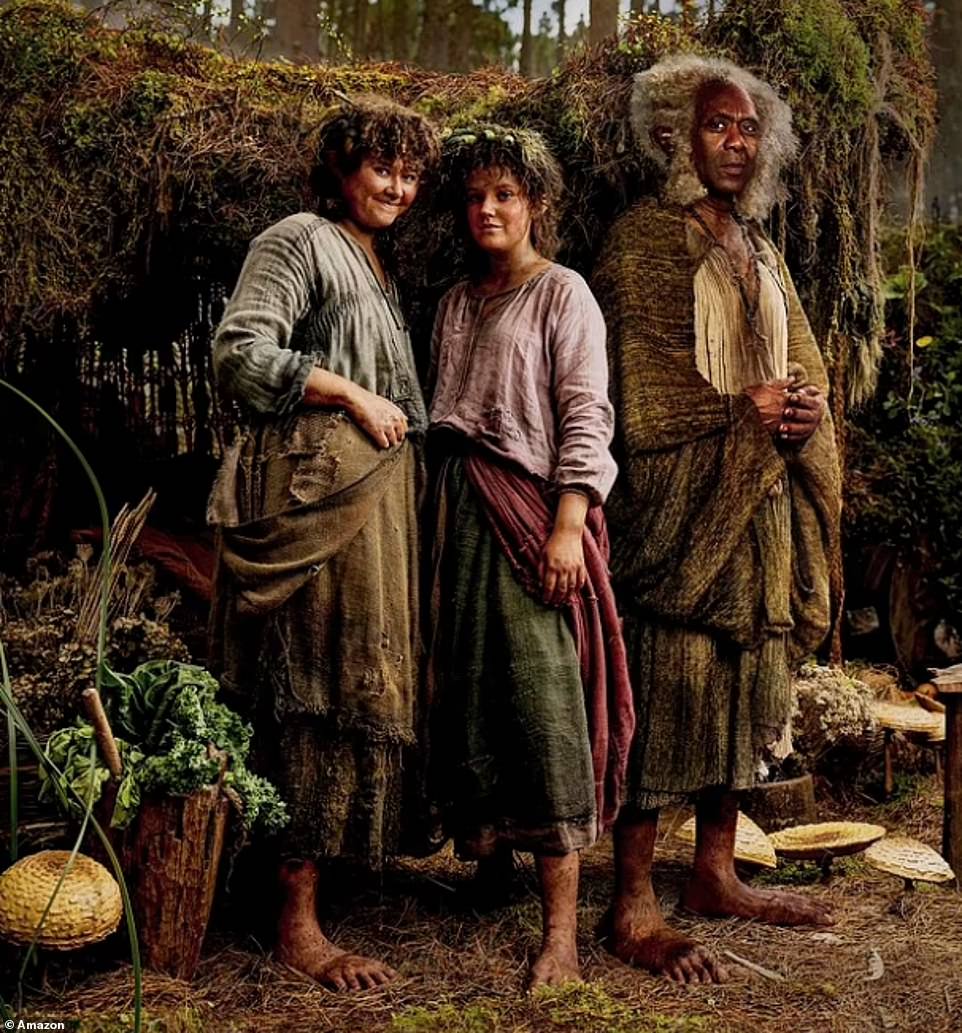 Opening up: Sir Lenny Henry (far right) has described his character as “the traditional Tolkien little guy… the little people in this world provide comedy but also get to be incredibly brave”

Speaking to GQ about the push for diversity, Sir Lenny said that effort was being made to make the genre ‘more inclusive’ after the original Lord of the Rings films featured no black characters.

‘Actually, storytellers can do what they want, because they’re storytellers. In the reimagining of these stories from 1000 years ago, they are not part of the canon that everybody knows, this is a reimagining and re-weaving of the story.’

The production – rated TV-14 for violence versus Game of Thrones prequel House Of The Dragon, which is TV-MA for violence, language, and nudity – is one of the most expensive in history, with Amazon spending at least $465 million on the first season in New Zealand, where the series employed 1,200 people directly and another 700 indirectly. In total, the season has reportedly cost $1 billion.

Despite being set centuries before the books and films that make up the Tolkien’s canon, fans of The Lord of the Rings will notice some familiar characters, based on the long lifespan of some of the creatures, including Galadriel, Elrond and Isildur. Sauron, the evil force, is unseen in the first two episodes but a malevolent presence throughout.

It will also debut in the long shadow left by Peter Jackson, whose film trilogy adaptation of Tolkien’s books won critical and commercial praise in the early 2000s and claimed the best picture Oscar for Return of the King” For the series, there was more freedom to create as long as it was true to the author.