Next chancellor faces debt whirlwind after bonds sell-off adds billions to the cost of interest on UK’s £2.4 trillion pile

The next Chancellor faces a deepening borrowing headache after a major sell-off in UK bonds added billions to the cost of paying interest on its £2.4 trillion debt mountain.

That means they are effectively demanding bigger interest rates when the Treasury wants to borrow more. 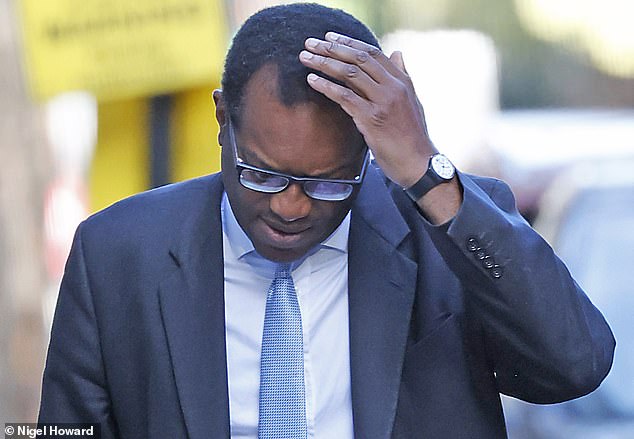 Headache: The UK bond market sell-off adds to the challenges facing the next occupant of 11 Downing Street, tipped to be Kwasi Kwarteng (pictured)

The pound has also been hurtling lower, dipping to as low as $1.1508 against the US dollar yesterday, its lowest level since the start of the pandemic in March 2020.

The UK bond market sell-off adds to the challenges facing the next occupant of 11 Downing Street, tipped to be Kwasi Kwarteng, who will be under immediate pressure to unleash a package of cost-of-living support as energy bills soar.

Bond prices have just seen their biggest monthly fall since 1994.

The scale of the impact on the Treasury increases over time as it issues more bonds at the higher rates.

A model produced by the Government’s own fiscal watchdog shows that the increase in yields on ten-year bonds over recent weeks from 1.8 per cent to 2.85 per cent would add £1.9billion in debt interest payment in 2023-24, according to Paul Dales, chief UK economist at Capital Economics. That climbs to £6billion by 2026/27.

An added headache is that some bond yields are directly linked to inflation, which is also soaring.

One recent estimate by consultancy Pantheon Macroeconomics suggested that the UK’s debt interest bill would rise to £118billion for the current financial year alone, £35billion higher than previously forecast.

Further economic gloom was provided yesterday by a survey showing a UK manufacturing downturn in August – chiming with a similar trend in countries from China to Germany as demand weakened.

Yet there was also some relief for factories that have been struggling with surging costs, as price pressures eased.