Rafael Nadal suffers a freak accident at the US Open as he hits himself in the face with his OWN racket, leaving him with a bloodied nose and requiring treatment… but the 22-time Grand Slam winner goes on to win

Rafa Nadal’s US Open campaign remains on track despite a freak accident today that saw the Spanish champion smash himself in the face with his own tennis racquet.

Holding a 3-0 lead in the fourth set and a two sets to one lead over Italian Fabio Fognini, Nadal suffered the shocking self-inflicted blow when a forehand went wrong. 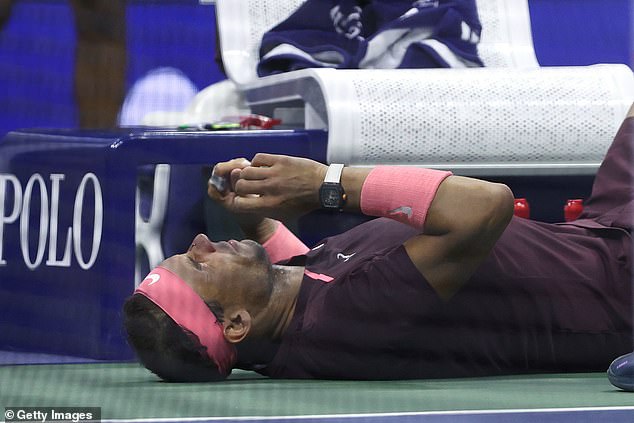 His racquet hit the acrylic hard court at Flushing Meadows and rebounded back into his face, leaving him dazed and bleeding from a cut on his nose.

‘The rebound off the court… boom! Right on the nose,’ commentator Robbie Koenig remarked at the time.

‘[I’m] Wondering if it just stunned him a little bit. It’s a rule that the players aren’t allowed to play if there’s any bleeding going on.’

Nadal had to lie down as he received treatment on the court and returned to action sporting a pink band aid across his nose.

The New York crowd let out a roar of delight as he rose to his feet.

A totally strange night. Nadal finally cruising 3-0 in the fourth, just whacked himself in the face with the racquet. Trainer out. Cut across the nose. Is it Halloween? What a bizarre match.

Hope Rafael Nadal is ok. He just had a freak accident on the court where his racket hit the court and bounced back and struck his nose. Nadal, bloodied, walked to the net and then laid down flat on his back. After being treated, he’s up.

The legendary player was quick to bounce back from the bizarre injury and stormed away from Fognini to take the fourth set 6-1 and claim his spot in the third round.

When asked if he was OK after the game, Nadal answered, ‘A little bit dizzy at the beginning and a little bit painful.’

When questioned if this kind of freak accident had ever happened before, he quipped, ‘With a golf club but not with a tennis racquet.’

Nadal had an sluggish start to the match, dropping the first set with breaks in the third and seventh games.

It was the second successive match in which he’d dropped the first set after doing the same in his opener against Australian Rinky Hijikata.

The first five games of the second set were all breaks with Nadal forced to get some treatment for blisters on his hand at 2-3 down.

Fognini stretched out to a 4-2 lead before the Spaniard won the next four games to take the set and level the tie.

Nadal hit six winners to grab the third set against a disheartened Fognini, who needed medical attention to his foot.

Nadal was coasting to a 3-0 lead when his bizarre injury stalled his progress – and with tape on his face, he returned to close out the proceedings in two hours and 42 minutes.

He goes on to face France’s Richard Gasquet against whom he boasts a 17-0 career record.

The Spanish champion has 22 grand slam titles, the most in history, with his most recent a gut-busting effort to defy injury and come from two sets down to beat Russian world No.1 Daniil Medvedev.

With Novak Djokovic barred from the US Open because of his vaccination status and veteran Roger Federer side-lined with injury and being no certainty to return, Nadal has an opportunity to assert himself as the best of all time with a fifth US Open crown.