Lowering your sleep age by reducing the amount of disruptions, improving quality of rest and getting an adequate amount each night can help ward of diseases like Parkinson’s and extend a person’s life by reducing their ‘sleep age’, a new study finds.

A joint research team from Stanford University and the Danish Center for Sleep Medicine found a clear correlation between the estimated sleep age of a person and their life-span.

They used polysomnography tests (PSGs), which gauge multiple biometrics to determine sleep-quality and diagnose potential sleep issues in people to figure a person’s sleep age. Elderly people generally suffer more disturbances, and a decrease in quality of sleep can be an early sign that a person will develop a cognitive impairment like Parkinson’s, Alzheimer’s or dementia in the future.

A clear correlation between poor sleep and an increased all-cause mortality rate was found. A 10-year change in sleep age can extend or reduce a person’s life by around 8.7 years. 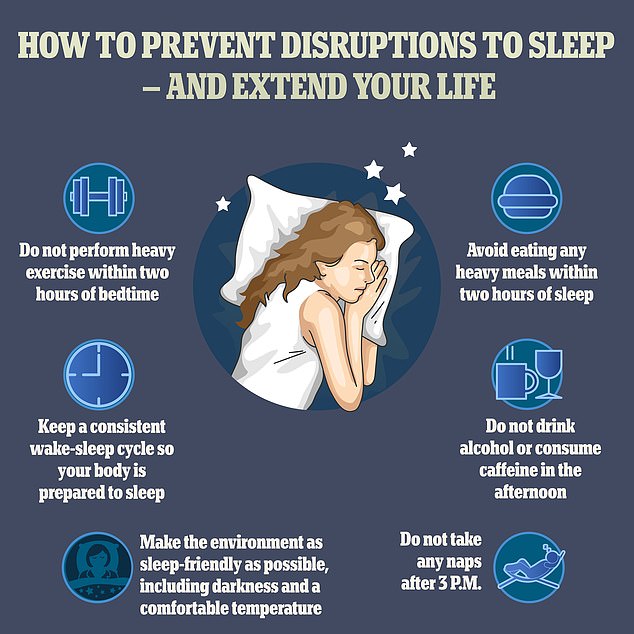 Researchers, who published their findings in npj Digital Medicine, gathered data from 13,332 PSGs for the study.

These tests gauged a person’s airflow, nasal pressure, blood oxygen saturation and other metrics while they slept each night.

A PSG can detect disruptions in sleep by seeing when these metrics reach abnormal levels. It can also tell what stage of sleep a person is in, whether it is light, deep or rapid eye movement sleep – often known as REM.

Many of these disruptions are undetectable to the person who is sleeping. A person could wake up for less than a minute before immediately going back to bed – and never even remember that it occurred.

This means that many people who believe they are getting a full night of undisrupted sleep may be suffering a problem they are unaware of.

They used a machine-learning system to interpret the data from the PSGs and generated a ‘sleep age’ for each of the participants. 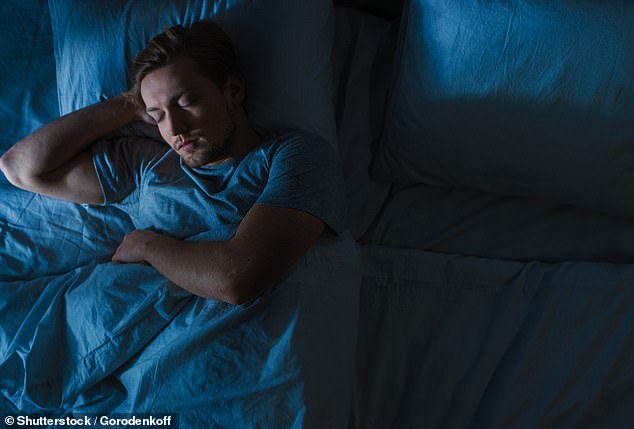 In many cases, the sleep age matched or nearly-matched the actual age of the person- as expected.

Many people were either 10 years older or younger in sleep age when compared to real age, though, indicating that there were significant differences.

After follow ups, they determined that a person with a ten-year difference between real and sleep age will live up to 8.7 years more or less than their peers of the same real age and with similar health profiles.

‘Our main finding was that sleep fragmentation—when people wake up multiple times throughout the night for less than a minute without remembering it—was the strongest predictor of mortality,’ Dr. Emmanuel Mignot, a sleep medicine professor at Stanford who contributed to the study told Neuroscience News.

‘Though we see a link in the data, how it contributes to mortality is unknown. This is different from a person realizing they were waking up, which happens during sleep disorders such as insomnia.’

Experts are not yet exactly sure why these sleep disruptions play such a large role in overall health, though. 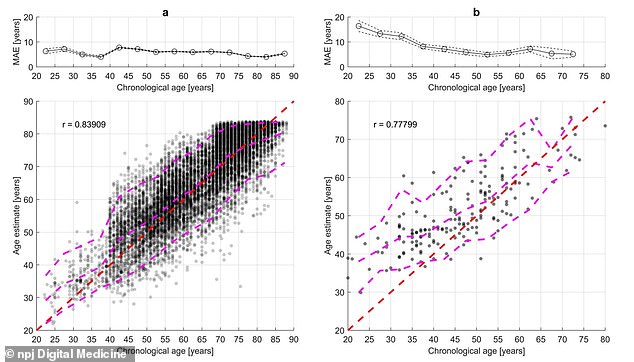 Researchers found that a person’s sleep age and real age could differ by around a decade maximum, and as a result could extend or reduce a person’s life by around 8.7 years

Insomnia and disruptions to sleep are seen by experts as key early indicators that a person will eventually suffer from cognitive conditions like Parkinson’s, Alzheimer’s or dementia in the future.

Sometimes it is the earliest symptom to emerge, sometimes years before a person will realize anything else is wrong.

Mignot says that calculating a ‘sleep age’ would be too complicated for the average person, but they could use strategies to lower their age and improve their overall quality of sleep.

‘Going to bed and waking up at regular hours is a key to improving your sleep,’ he explained.

‘This means not oversleeping but ensuring you’re fully rested. It’s a different amount for everyone and often the window varies slightly—for example, being a night owl versus an early bird.

‘Getting solid light exposure—preferably with outside light—during the day, keeping the sleep environment dark at night, exercising regularly but not too close to bedtime, not drinking alcohol and caffeine around bedtime, and avoiding heavy nighttime meals all contribute to healthy sleep.’

Other experts have also recommended people not to nap too late in the afternoon as to not disrupt their nighttime sleep. Heavy meals within two hours of bedtime are recommended against as well.

Mignot also says that a person who believes they are suffering from a sleep issue consult a doctor, as sometimes medical intervention – not just behavioral changes – are necessary for a person to improve their sleep.