By Ashleigh Gray For Dailymail.Com

Gigi Hadid looked effortlessly cool as she stepped out solo in New York City on Friday.

The 27-year-old supermodel flaunted her svelte figure in a short-sleeved white t-shirt and light wash baggy jeans as she chatted on the phone.

Always fashionable, the mother-of-one finished the look with a pair of crisp white sneakers. 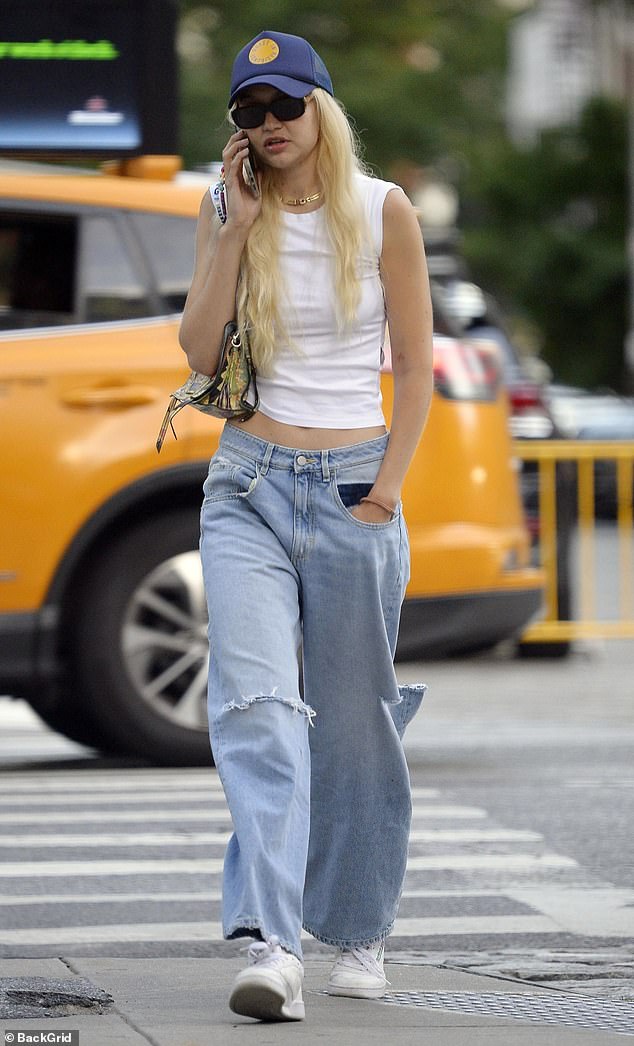 She topped the look with a navy blue trucker hat from her imminent brand Guest In Residence.

The entrepreneur’s crewneck shirt showed a slither of her flat stomach as she walked with her phone in-hand.

Her denim trousers were low-slung and had holes near the knees, giving the ensemble an elevated edge.

She accessorized with a short gold chain necklace, a set of tiny earrings, and dark, rectangle-shaped sunglasses.

Hadid, full name Jelena Hadid, slung a small handbag with tassels over one of her shoulders while out and about ahead of the weekend. 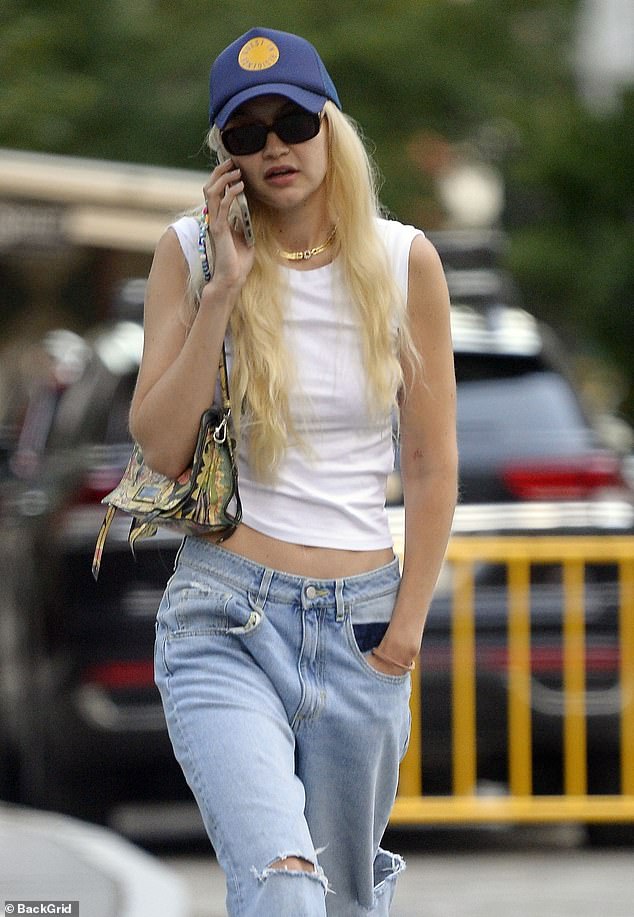 Cool girl: Hadid held a phone conversation as she stepped out in a baseball cap on Friday afternoon 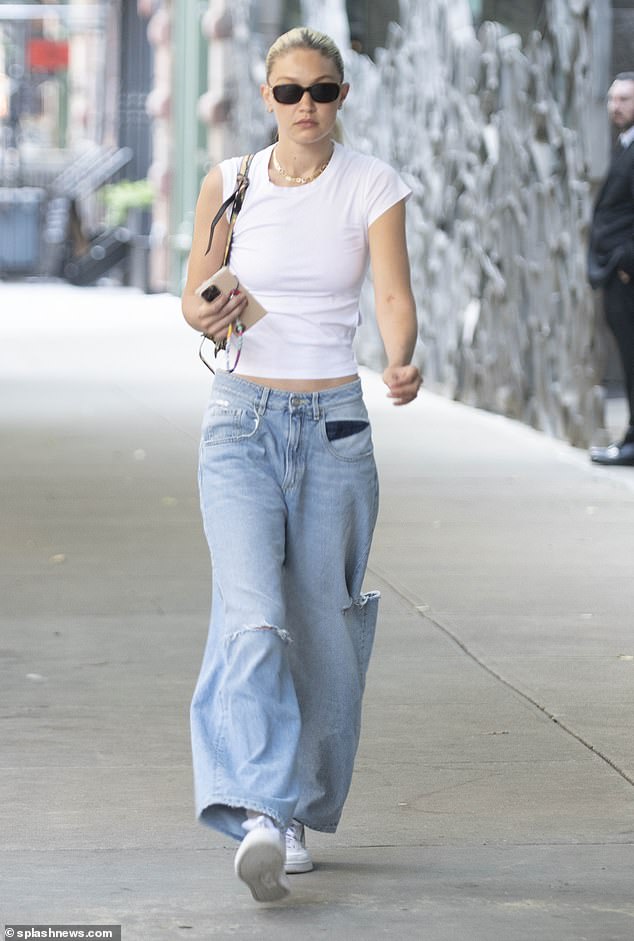 Stellar style: The fashionista pulled her hair back into a fuss-free ponytail at one point

At one point she rocked a navy blue baseball cap on top of her flowing, waist-length blonde locks.

And later she pulled the lengthy and lustrous tresses back into a fuss-free ponytail.

She set the locks at the center of the back of her dome, letting them stream down her back.

Naturally gorgeous, the beloved influencer went without a stitch of makeup for her stroll through the Big Apple.

Attached to her phone was a colorful and dainty, beaded charm that added pizazz to her handheld device. 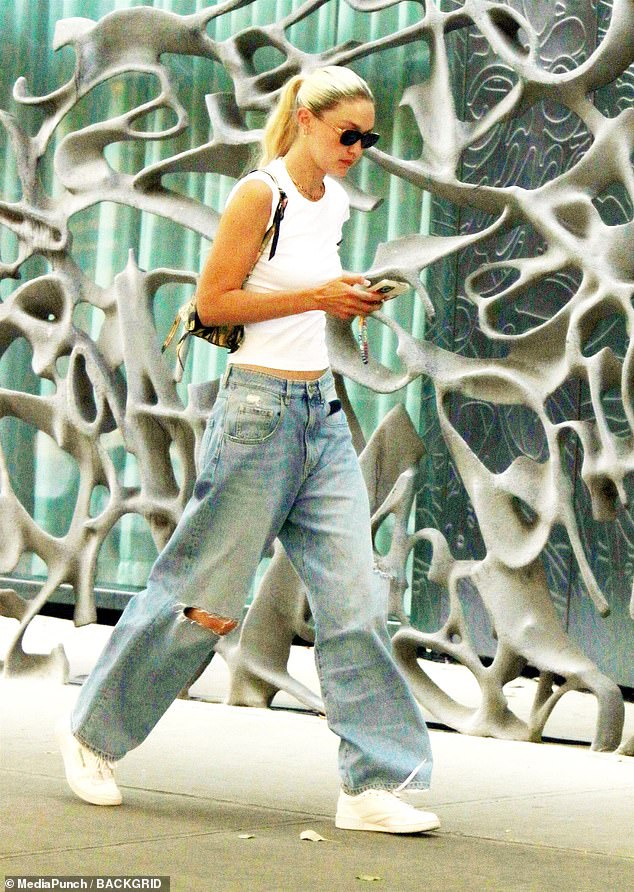 Edgy: Her denim trousers were low-slung and had holes near the knees, giving the ensemble an elevated edge

Hadid announced the upcoming launch of her new venture, a knitwear fashion range, just one day ago.

Guest in Residence was founded by the go-getter, and she’ll helm it as the official Creative Director.

The news came via a social media post that showed a black and white snapshot of the star.

She sat on the edge of a white desk with a board of fabrics and photo references pinned on the wall behind her.

‘ONE WEEK AWAY — my first-ever brand!’ she teased in a short caption, adding, ‘As a founder, creative director, and lover of all-things-cozy , I’m so happy to finally share that @GuestInResidence officially launches September 7th, 2022.’ 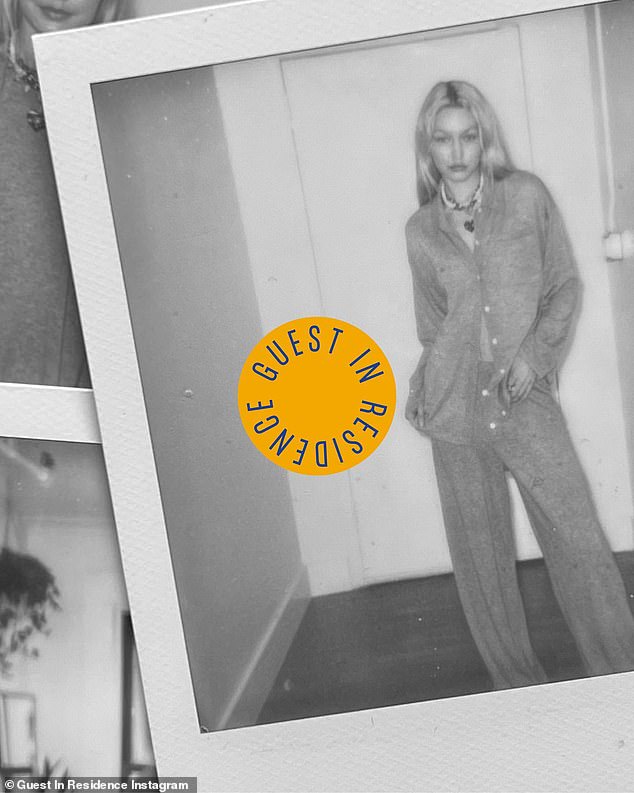 And later on Thursday she shared another grayscale Polaroid image, appearing to model a set of the brand’s forthcoming offerings.

Hadid stood in front of a door in a hallway wearing a matching co-ord consisting of a button-up shirt and relaxed pants.

The caption read: ‘ONE WEEK AWAY #GuestInResidence.’ 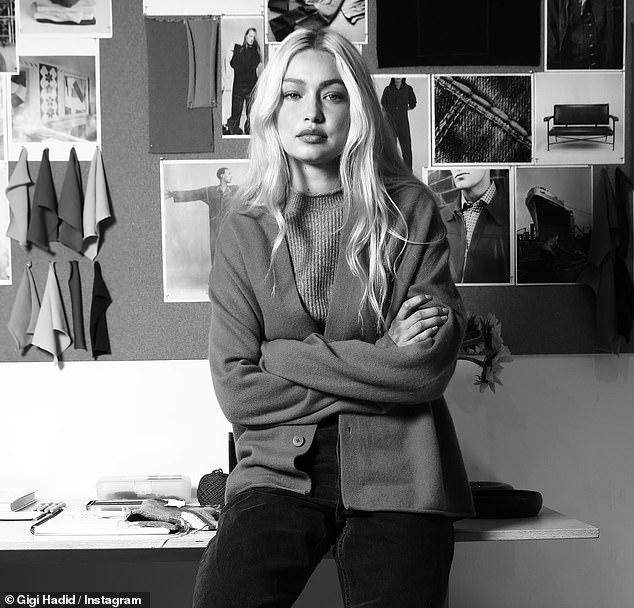 Coming soon! Hadid announced the upcoming launch of her new venture, a knitwear fashion range, just one day ago