The £80m boss of Shell is preparing to join the stream of FTSE100 bosses heading for the door.

Ben van Beurden – who, it emerged in March, bagged £4.6m in bonuses on top of his £1.4m salary last year, taking his total pay and bonuses to almost £80m during his nine years at the helm – could step down as soon as 2023 as the oil giant begins its search for a replacement.

His departure will mark the end of an era for Shell, as it tries to toe the tricky line of boosting Britain’s energy security with embracing sustainable technologies. While Van Beurden’s legacy includes a commitment to reduce oil production, he has been criticised for failing to take more drastic action. 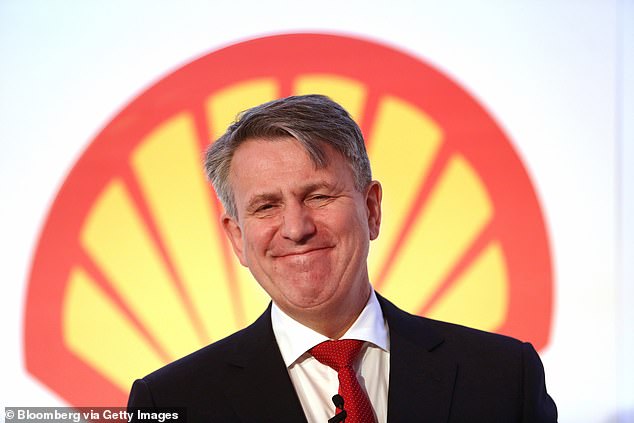 In a landmark court case brought by activists in the Netherlands last year, the oil giant was ordered to speed up the pace of its green transition and ensure its carbon dioxide emissions in 2030 are 45 per cent lower than in 2019.

Rivals such as BP are also piling on the pressure, as they ramp up their investment in areas such as bioenergy and hydrogen power which will help drive the shift to ‘greener’ production. Bernard Looney, BP’s chief executive, has vowed to make a raft of investment in more sustainable energy sources by 2025, but Van Beurden is seen by many in the industry as playing catch-up.

Shell’s shake-up came Reckitt Benckiser boss Laxman Narasimhan resigned from the Dettol-maker to head back to the US. Hours later, on Thursday night, coffee giant Starbucks revealed it had roped in the Indian-American businessman as its new chief executive. Dutchman Van Beurden, 64, joined Shell in 1983, and held a variety of roles across the business in its oil exploration and refinement divisions.

Shortly after becoming chief executive in 2014, he orchestrated the £47bn takeover of oil and gas exploration company BG Group.

He also oversaw the relocation of Shell’s headquarters from the Netherlands to London. But as the pandemic hit, he disappointed investors by slashing the firm’s dividend for the first time since the Second World War.

Shareholders who had relied on the motto ‘never sell Shell’, due to its reliable payouts, were left reeling as the shift underlined just how badly the oil and gas industry was struck by Covid.

Two years on, and the picture has changed yet again. Oil and gas giants are now making record profits as Russia’s brutal attack on Ukraine has caused the price of fuels to spike.

Shell made a windfall of £9.9billion in the three months to June – sparking fury among households and businesses who are struggling to afford rising energy bills.

For Van Beurden, who has been in the job for eight years and whose bonuses are coming under ever-increasing scrutiny, now seems like an attractive time to bow out.

Analysts said it was no surprise that the Shell lifer was heading for the door, given that few oil and gas bosses last in their role beyond ten years. Shell began lining up successors last summer, according to Reuters, and has shortlisted four candidates. Top of that list is Wael Sawan, head of integrated gas and renewables and Huibert Vigeveno, who heads refining operations of downstream.

Oswald Clint, at investment bank Bernstein, said: ‘The executive bench is deep and well-suited and prepared to continue the profitable reshaping of the company for tomorrow.’ Shell declined to comment on the speculation about Van Beurden’s departure.

Why have so many chiefs quit?

The FTSE100 has seen an exodus of chief executives this year – proof the ‘Great Resignation’ is also being practised by the City’s top brass.

So far 17 blue-chip bosses have announced their resignation, well above the average of a normal year. The departure of Shell’s Ben van Beurden would take that number to 18.

Other high-profile names include the likes of Prudential’s Mike Wells, Taylor Wimpey’s Pete Redfern and JD Sports’s Peter Cowgill who have already been replaced.

There are myriad theories as to why they have chosen to step down. They range from burnout after two years of Covid, while some do not want to face the upcoming recession – choosing to exit before times get tough. Some foreign bosses have also decided to return home to their families now that the pandemic is over.

A leading head-hunter also told the Daily Mail that the exodus is being prompted by escalating levels of red-tape and box-ticking.

Mark Freebairn, of Odgers Berndtson, said bosses who joined a listed firm wanting to run operations were becoming frustrated by never-ending engagement with regulators and shareholders.

See also  Roof falls in on DIY and furniture: Wickes and DFS warn over sales

He added: ‘If you’re a chief executive and a private equity firm comes along and gives you the chance to run a company…for the same money but without any of the scrutiny, without the box-ticking, without your neighbours knowing everything about your pay – why wouldn’t you take it?’