Some parts of Kherson counteroffensive are coming into focus 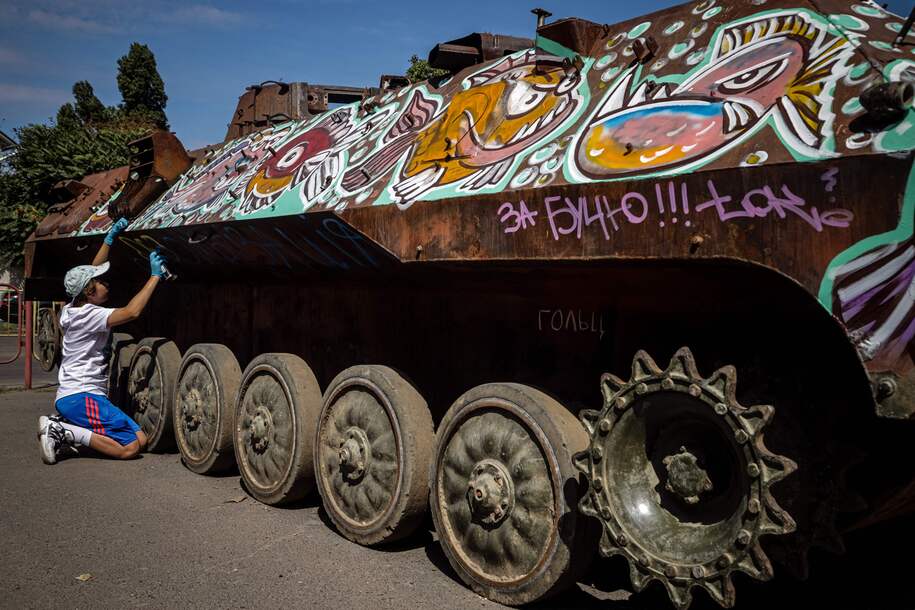 On Monday, Ukraine began a counteroffensive in Kherson oblast. Depending on who you listen to, that effort has been wildly effective, liberating towns and villages from one end of the oblast to the other, or it’s been an utter failure, crushed by Russian troops who now control more territory than they did when Ukraine’s movement began. The truth is almost certainly in the middle.

In particular, there have been claims that what the Ukrainians have done in Kherson is a test of their ability to conduct a combined arms strategy, that this strategy was planned in conjunction with U.S. teams that helped train Ukraine forces, and that, since this was their first attempt to put this training into action, the scope of the effort was deliberately limited. It’s a narrative that probably isn’t completely accurate, if only because it feels so right. However, it would seem to fit with what we actually know of activities in Kherson over the last four days. 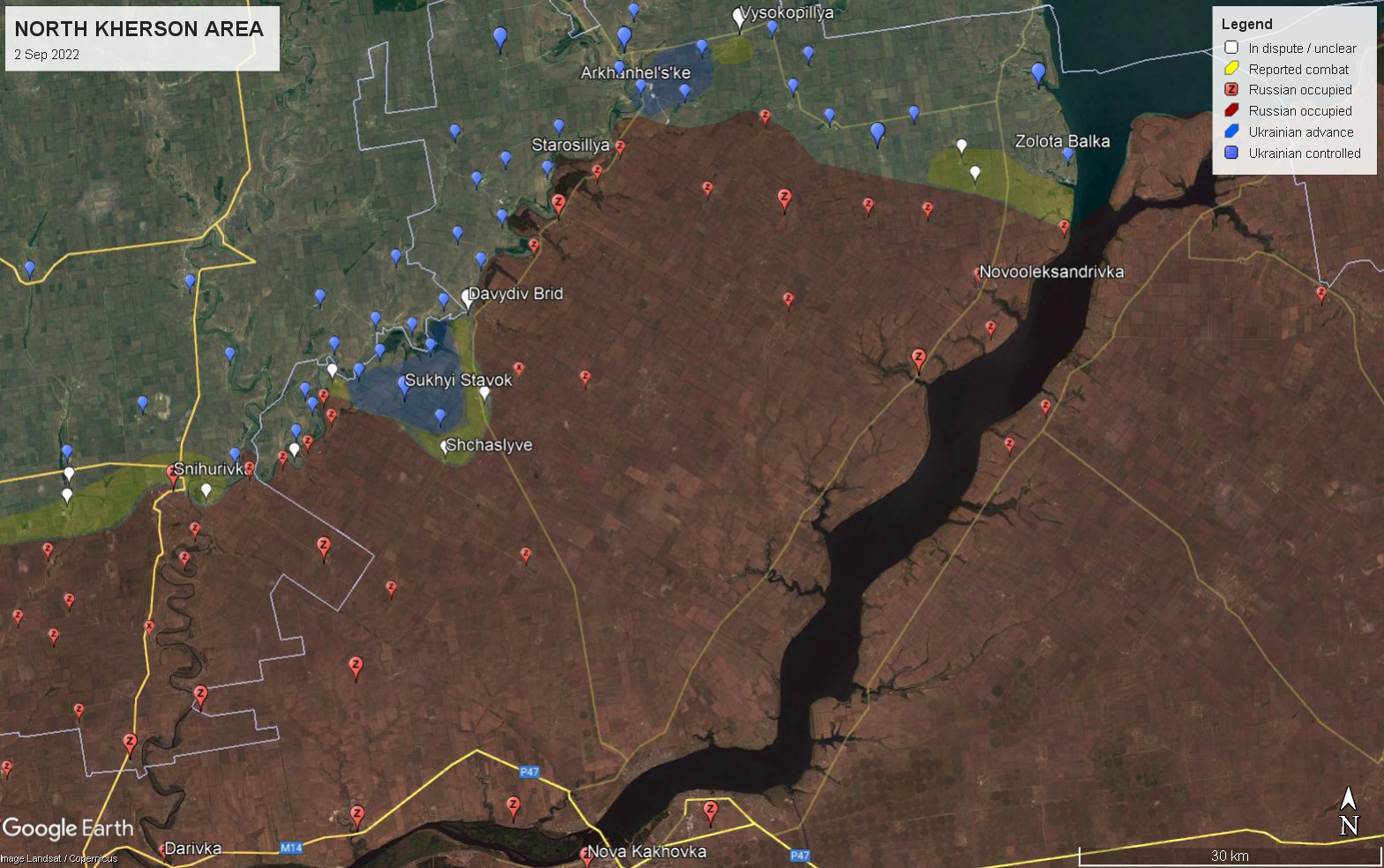 Advances around Arkhanhel’s’ke and Sukhyi Stavok seem to be confirmed.

On Tuesday, CNN reported that Ukraine had liberated four villages in three different areas of Kherson oblast. One was Arkhanhel’s’ke at the northern end of the area of Russian control, adjacent to the critical town of Vysokopillya. That location has now been confirmed through geolocated images. Vysokopillya itself was reported as under Ukrainian control at one point, though it now seems to be back in the “contested” category. At the moment, Russia seems to be clinging only to a few streets at the south end of town, while Ukraine not only has the rest, but all surrounding villages.

Ukrainian gains across the Inhulets River at Sukhyi Stavok also appear to be confirmed. That effort has pushed forward to reportedly liberate the village of Kostromka, Reports from Russian Telegram indicate that fighting has died down around Bruskynske on the east of this salient, and that Ukraine is instead pushing south toward Shchaslyve. I’ve left both villages marked “in dispute” until there’s more clarification of how this counteroffensive is proceeding. There are also some reports that Davydiv Brid itself is now in dispute, though video from the area on Tuesday showed no sign of nearby military activity. So consider that marker to be “grain of salt white.”

The weirdest factoid of the week may be that all of the news of Ukrainian advances east of the Inhulets is coming from the same pro-Russia sources who, just a few weeks ago, claimed the entire bridgehead across the Inhulets had been wiped out (that this was the second time they claimed it had been destroyed didn’t seem to bother anyone). On Friday, they are again pushing videos that claim to show Ukrainian vehicles near the river crossing being hit by drones or artillery. However, embedded data shows that these are old photos, and geolocation shows they are from somewhere else. I’m mostly accepting this “Russian view on the Ukraine advance” because I don’t see why they would exaggerate Ukrainian success. Plus … it’s all I’ve got.

It’s when you get to the south end of the oblast, that many of the reports from Monday seem to fall apart. 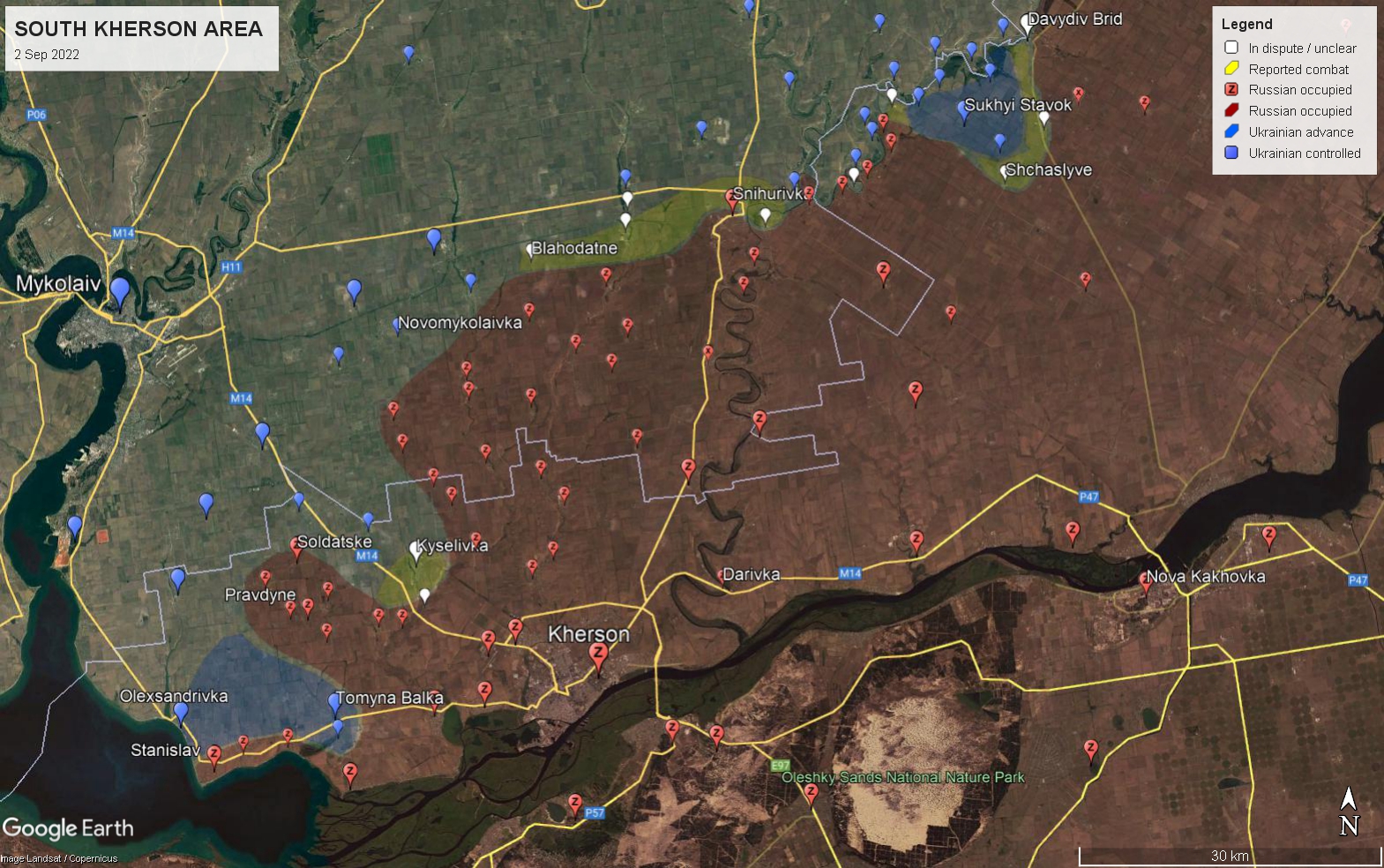 In the south, information is both less reliable, and less favorable to Ukraine.

In some of the reports this week, the suggestion was that the main thrust of the counteroffensive was limited to the south. If so, then it seems to have been very limited. On Monday, CNN reported the frankly astounding news that Ukraine had liberated Tomyna Balka and nearby Novodmytrivka. Those gains are still shown here, even though no other source has confirmed them. On the other hand, even those sources that are still cautiously drawing the Russian control boundary to the west of those two villages don’t seem to have any evidence that Russia is still camped out there. I’ve left them blue until I get something better, but I simply don’t know.

In the meantime, Ukraine does seem to have re-re-re-liberated the utterly unholdable town of Oleksandrivka along the coast. If Ukraine does have Tomyna Balka, this offers a chance to clear that whole point and develop a more sustainable position. But that’s only if they control Tomyna Balka.

North of this area, earlier reports that Ukraine held Pravdyne and Soldatske appear to have been reversed. Earlier in the week, it seemed like Ukraine might be prepared to squeeze that salient extending out south of the major M14 highway. Now Russian control in that area doesn’t appear to be in immediate threat. Something similar has happed to the norther around Blahodatne, where Ukraine was reportedly in control after Monday. The latest information indicates that Russia has either rolled back that advance, or it never happened in the first place.

If there is one single, “limited test” of combined underway, maybe it’s taking place in that bridgehead across the Inhulets, because that’s where Ukraine seems to be making the most progress. On the other hand, finally taking out Vysokopillya would be huge. So would confirmation of control at Tomyna Balka.

Was all that confusing enough? Yeah … there you go. Hopefully, we will gain more knowledge soon. And as always, hopefully that means a lot less red on the map.

This is weirdly beautiful. The other end of the flight? Not so pretty, but effective.

Russia spent a good portion of Thursday pointing at shell craters near the plant and blaming Ukraine. Now, we know 1) Russia shelled the facility when taking it because we watched the whole thing on camera; 2) There have been multiple reports of Russian artillery deliberately firing into areas near the plant over the last two weeks; and 3) None of the shells seem to have come from the north, which is the only area where Ukraine is in artillery range.

I own a tiny DJI drone. Footage like this always makes me think of sending it off to battle in Ukraine. Like when the Brave Little Toaster goes to war.

Even a small munition can penetrate the thin armour on the top of the vehicle, and set off amunition/fuel. pic.twitter.com/YFW7lz2H9o