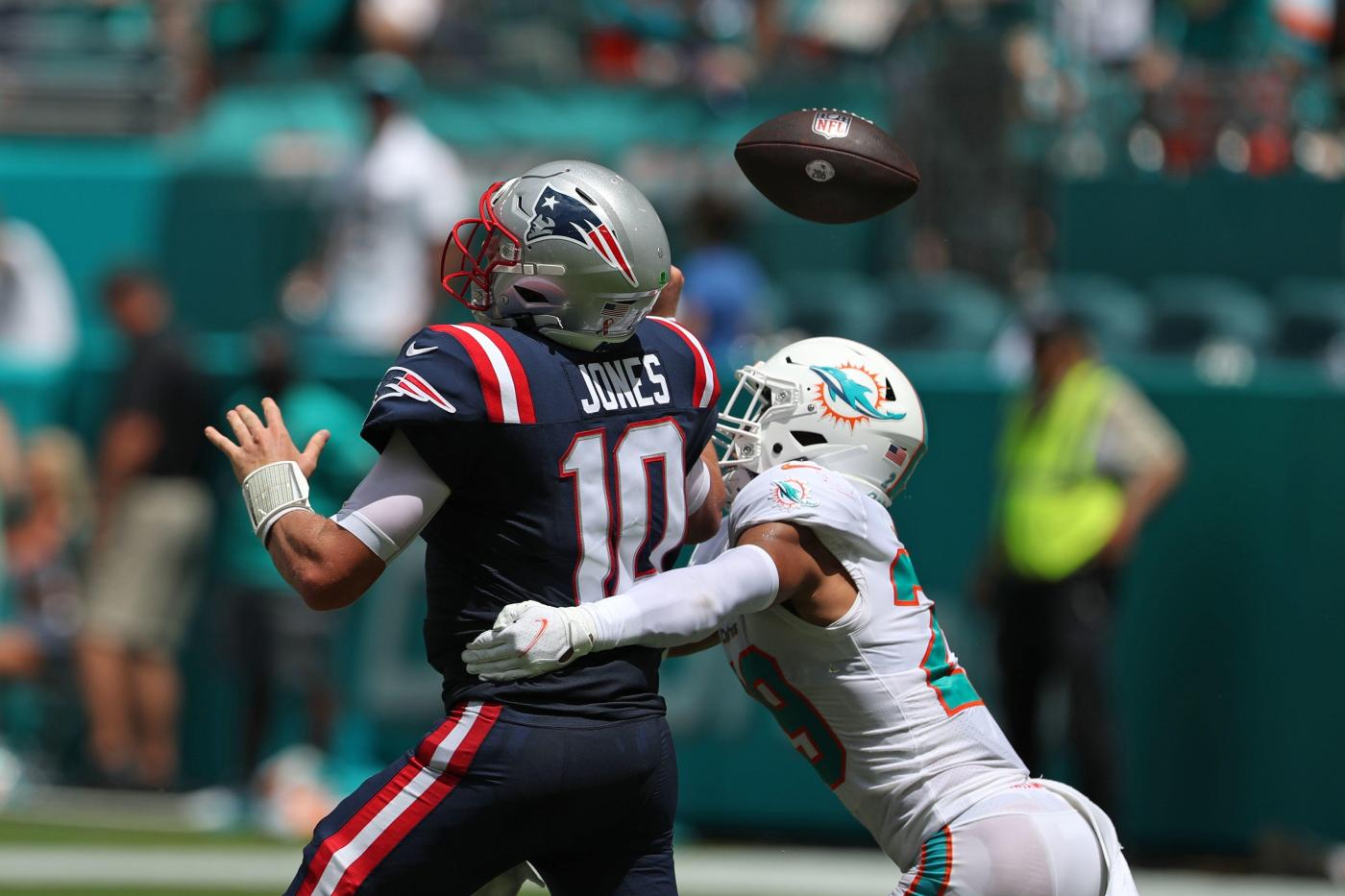 Each week of the NFL season, The Baltimore Sun will rank all 32 NFL teams. The rankings will take into account not just weekly performance, injuries and roster depth, but how well each team measures up as Super Bowl contenders.

Here are the rankings heading into Week 2:

Quarterback Josh Allen and the Bills made a strong opening statement, defeating the defending champion Rams, 31-10, with a dominant performance on both sides of the ball. Allen appears to have taken his game to another level in his fifth season, backing up the preseason hype that made Buffalo the Super Bowl favorite. The addition of edge rusher Von Miller paid immediate dividends, with the future Hall of Famer recording two sacks against his former team.

What more can you say about the Chiefs? Kansas City’s offense showed no signs of slowing down after trading star wide receiver Tyreek Hill, as Patrick Mahomes threw five touchdown passes to four receivers in a dominant 44-21 win over the Cardinals. Tight end Travis Kelce hasn’t lost a step, receivers JuJu Smith-Schuster and Marquez Valdes-Scantling delivered in their debuts and a rejuvenated Clyde Edwards-Helaire and rookie Isiah Pacheco led a promising rushing attack. This still looks like the best offense in the NFL.

Despite all the attention on quarterback Tom Brady this offseason throughout his retirement, eventual return and mysterious time spent away from the team, the Bucs looked just as unbeatable in a 19-3 win over the Cowboys. The receiving room is still deep, Leonard Fournette is still an effective running back and the defense is just as dominant as ever. Receiver Chris Godwin’s hamstring injury looms large and the depleted offensive line struggled at times to protect Brady, but the talent on this roster will win out more often than not.

After falling short of the playoffs in the last game of the 2021 regular season, the Chargers look determined to finally break through in the AFC. A 24-19 win over the Raiders was by no means convincing, but the Chargers largely avoided the special teams mistakes and defensive miscues that have cost them dearly in recent seasons. Quarterback Justin Herbert looks ready to make the leap to an MVP contender, while Khalil Mack (three sacks) and Joey Bosa (1 1/2 sacks) look like the dominant pass-rushing duo many expected. The defense also intercepted Derek Carr three times. If coach Brandon Staley’s squad can deliver in crunch time week after week, this could be the top seed in the AFC.

Not to be outdone, the Ravens look like the Super Bowl contender they’ve always been throughout quarterback Lamar Jackson’s career. Questions about Jackson’s long-term contract negotiations don’t appear to have rattled the 2019 NFL MVP nor his teammates, as he continued his Week 1 dominance with three touchdown passes in a 24-9 win over the Jets. When left tackle Ronnie Stanley, running back J.K. Dobbins and cornerback Marcus Peters return, there’s a good chance the Ravens run away with the AFC North title and finally make a deep postseason run with Jackson at the helm.

See also  Teddy Bridgewater to Dallas? Not so fast — 10 thoughts on Dolphins weekend – The Mercury News

In the NFC, where many of the top contenders were outplayed in Week 1, the Vikings and Eagles looked solid. Justin Jefferson exploded for 184 receiving yards in Minnesota’s 23-7 rout of the Packers, while A.J. Brown had 10 catches for 155 yards in Philadelphia’s 38-35 win over the Lions. While Kirk Cousins and Jalen Hurts are not considered among the league’s top quarterbacks, they played well enough Sunday to show they’re capable of leading a division champion.

After entering the season among the favorites to win the NFC, the Rams and Packers were left to answer some tough questions about their future. The Rams insist that quarterback Matthew Stafford’s throwing elbow is fine, but he didn’t look like his usual self in Thursday’s loss to the Bills. Aaron Rodgers, meanwhile, seemed to miss star receiver Davante Adams, who finished with more receiving yards in Week 1 with the Raiders (141) than the rest of Green Bay’s wide receivers combined (120). Both teams are still talented enough, particularly on defense, to remain near the top of the conference, but they should no longer be considered the favorites.

Last year’s surprising AFC champions, the Bengals, got off to just about the worst possible start in a 23-20 overtime loss to the Steelers. Quarterback Joe Burrow turned the ball over five times (four interceptions, one fumble), kicker Evan McPherson missed a 29-yard field goal in overtime and had a game-winning extra-point attempt blocked at the end of regulation, and the defense couldn’t stop quarterback Mitchell Trubisky on the final drive that led to Chris Boswell’s game-winning 53-yard field goal. The offensive line, thought to be improved with free-agent signings this offseason, struggled once again, allowing seven sacks on Burrow’s 60 dropbacks. Sustaining last year’s level of success was always going to be a challenge, but the Bengals dug themselves an early hole as the only AFC North team to lose in Week 1.

The Steelers seem like the Steelers they’ve always been under Mike Tomlin: well-coached, strong defensively and tough to beat. There’s a reason Tomlin has never had a losing season in Pittsburgh. The offense seems to have a defined ceiling with Trubisky at quarterback, but the looming presence of first-round draft pick Kenny Pickett means the Steelers have to be taken seriously. There’s a chance reigning Defensive Player of the Year T.J. Watt is out for the season with a torn pectoral, but even that big blow probably isn’t enough to keep Pittsburgh out of playoff consideration.

There might not be a more disappointing result from Week 1 than the 49ers’ 19-10 loss to the Bears. While the sloppy conditions at Chicago’s Soldier Field made it difficult to move the ball, San Francisco should expect more from quarterback Trey Lance, who connected on less than half of his passes, took two sacks and threw an interception that led directly to a Bears touchdown that sealed the game. With Jimmy Garoppolo back in the building, Lance might be on a short leash.

Say what you want about quarterback Carson Wentz, but the Commanders have enough talented playmakers to produce an effective offense this season. Curtis Samuel looked electric after missing nearly all of last season, rookie Jahan Dotson caught two touchdown passes and Antonio Gibson delivered both on the ground and through the air. The emergence of safety Darrick Forrest and the pass rush provided by defensive linemen Jonathan Allen, Daron Payne and Montez Sweat makes Washington a dangerous wild card in a wide-open NFC.

Also in the NFC East, the Giants showed things might be a little different this year under new coach Brian Daboll. His call to go for two late in a 21-20 win over the Titans provided a shot in the arm for a team that hadn’t been above .500 at any point over the last five years. Perhaps even more promising is the play of running back Saquon Barkley, who appears fully recovered from the torn ACL that cost him much of the 2020 season and sapped his explosiveness in 2021. The 2018 No. 2 overall pick finished with 194 total yards and flashed his game-breaking ability with a powerful push inside the end zone on the crucial 2-point conversion. If Barkley is back to his rookie season form, the Giants should be much improved.

Down in the dumps

As if losing 20-7 to the Dolphins wasn’t bad enough, the Patriots got word that quarterback Mac Jones is suffering from back spasms, which could keep him out this week and possibly longer. Training camp reports indicated the Patriots’ offense was a mess under the direction of Joe Judge and Matt Patricia, and it looked that way on the field Sunday as New England committed three turnovers and averaged just 3.5 yards per carry. Even legendary coach Bill Belichick and a strong defense might not be enough to save the Patriots from falling out of the playoff race.

Dallas also got bad news about its quarterback after its season-opening loss to the Buccaneers. Dak Prescott will have surgery on his right thumb and is expected to miss 6-8 weeks, pushing Cooper Rush into the starting role unless the Cowboys make a move to acquire a veteran quarterback. While Rush delivered a win over the Vikings in emergency duty last season, he’s simply not good enough to lead Dallas to the top of the division. It’s only Week 1, but it already feels like the Cowboys should start thinking about 2023.