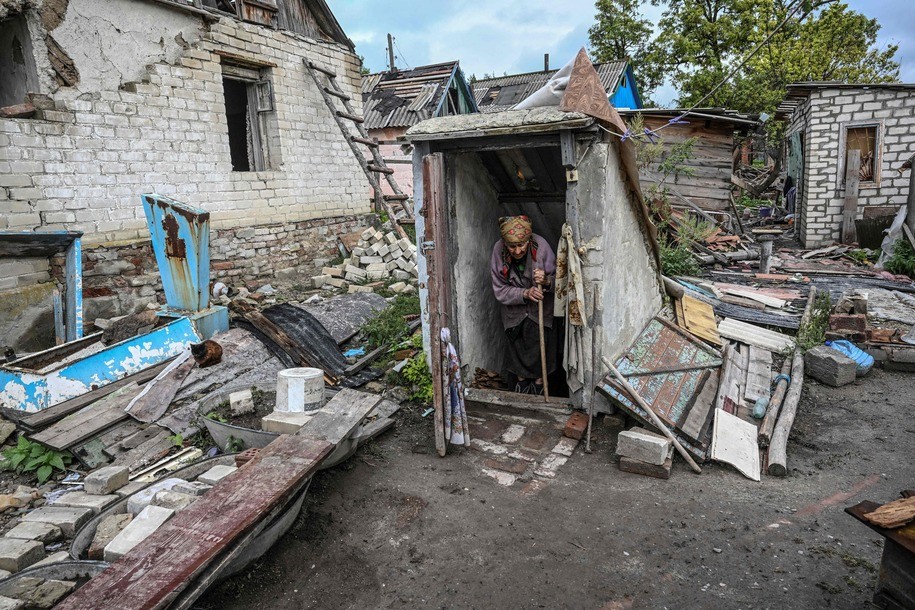 Nina Gonchar rode out the weeks-long battle for Bohorodychne in her cellar, Sept. 13, 2022

On Monday, there were reports from local officials that Russian forces inside Kherson were trying to negotiate their withdrawal from the oblast. Kos discussed this in detail, offering three alternatives: this could by psyops; this could be only a portion of the forces in Kherson; or this could be a wholesale withdrawal. That followed reports on Sunday that Russian forces in the area were attempting to pull back closer to the city of Kherson, so that they could be supported by artillery firing from across the Dnipro River, where they didn’t have the supply problems now facing Russian forces on the west side.

Either of those things might still be underway, but they’re apparently not happening quickly enough for Ukrainian forces. Because on Tuesday Ukraine launched what is reported to be a serious counteroffensive at two of the positions most critical to Russia’s front line in the region: Davydiv Brid and Snihurivka.

Both these areas have been the object of Ukrainian counterattacks before, and Snihurivka has been the target of significant attacks on multiple occasions. But now—perhaps encouraged by what’s happened in Kharkiv, perhaps sensing that Russia really is running into problems with supply—Ukrainian forces have reportedly reached both towns. According to some reports, they have even liberated both towns. On the other hand, official Russian outlets are reporting that the attack at Davydiv Brid was repelled. It’s probably too early to credit either report. 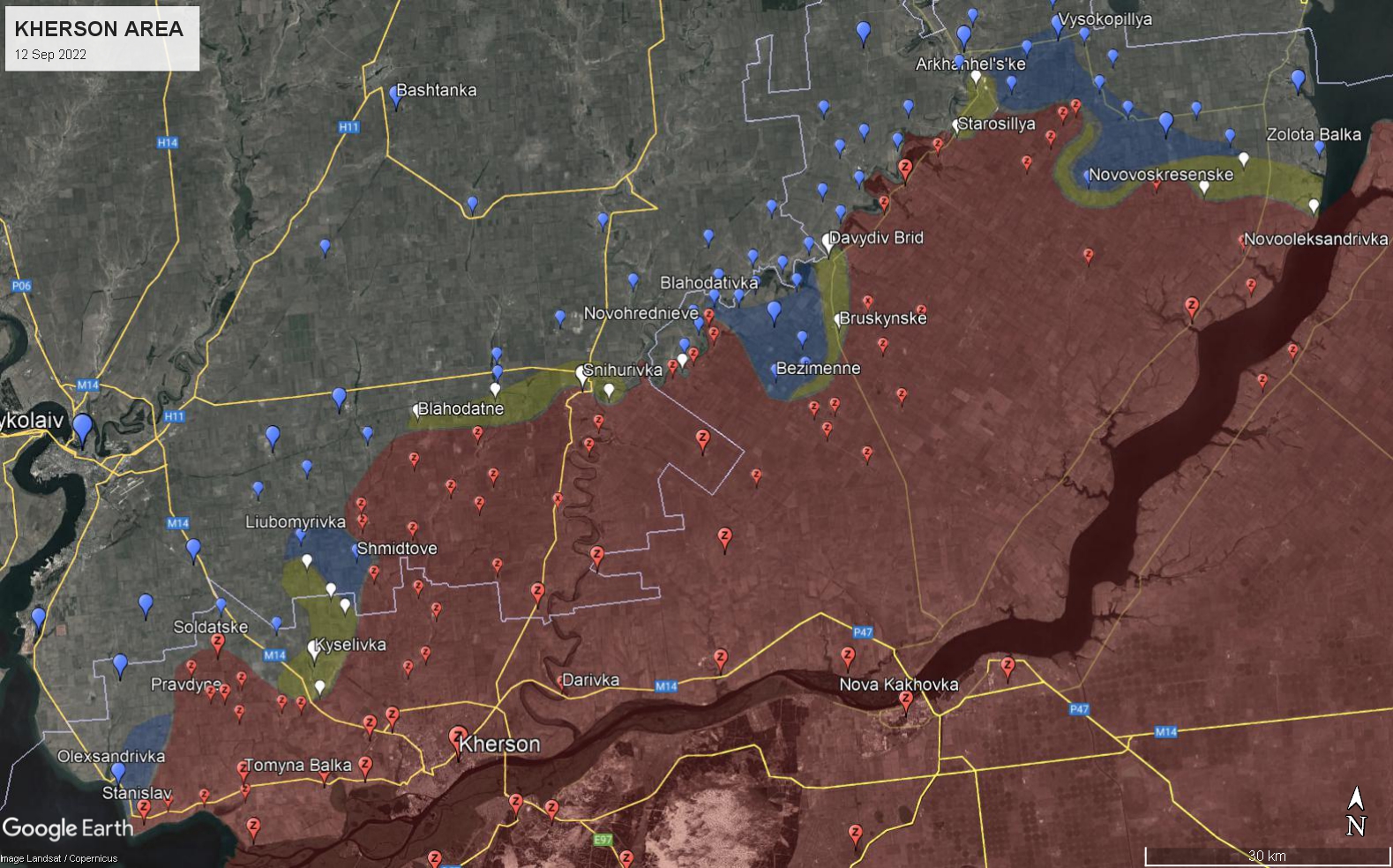 No huge changes, but change may come soon.

For right now, I’m mapping Kherson pretty much the way it was back before the counteroffensive in Kharkiv. At last report, Ukrainian forces held Olexsandrivka, but until someone sweeps the villages on either side, no one is likely to hold it. Ukraine was reported to be close, again, to full possession of Kyselivka, with some reports saying that a handful of Russian forces were left in the south part of the town. I’ve indicated Arkhanhel’s’ke as in dispute based on reports of two Russian attacks that made it into the edges of the town.

And … that’s about it. Maybe in the next 24 hours, we’ll see whether there’s any truth behind either plans for withdrawal or a tactical relocation closer to Kherson. But Russia should realize that if they wait long enough that Ukraine achieves a major breakthrough, they won’t be in a mood to negotiate.

The same kind of too-much news and not enough is going on at the far end of the battlefield in the area around Severodonetsk and Lysychansk. 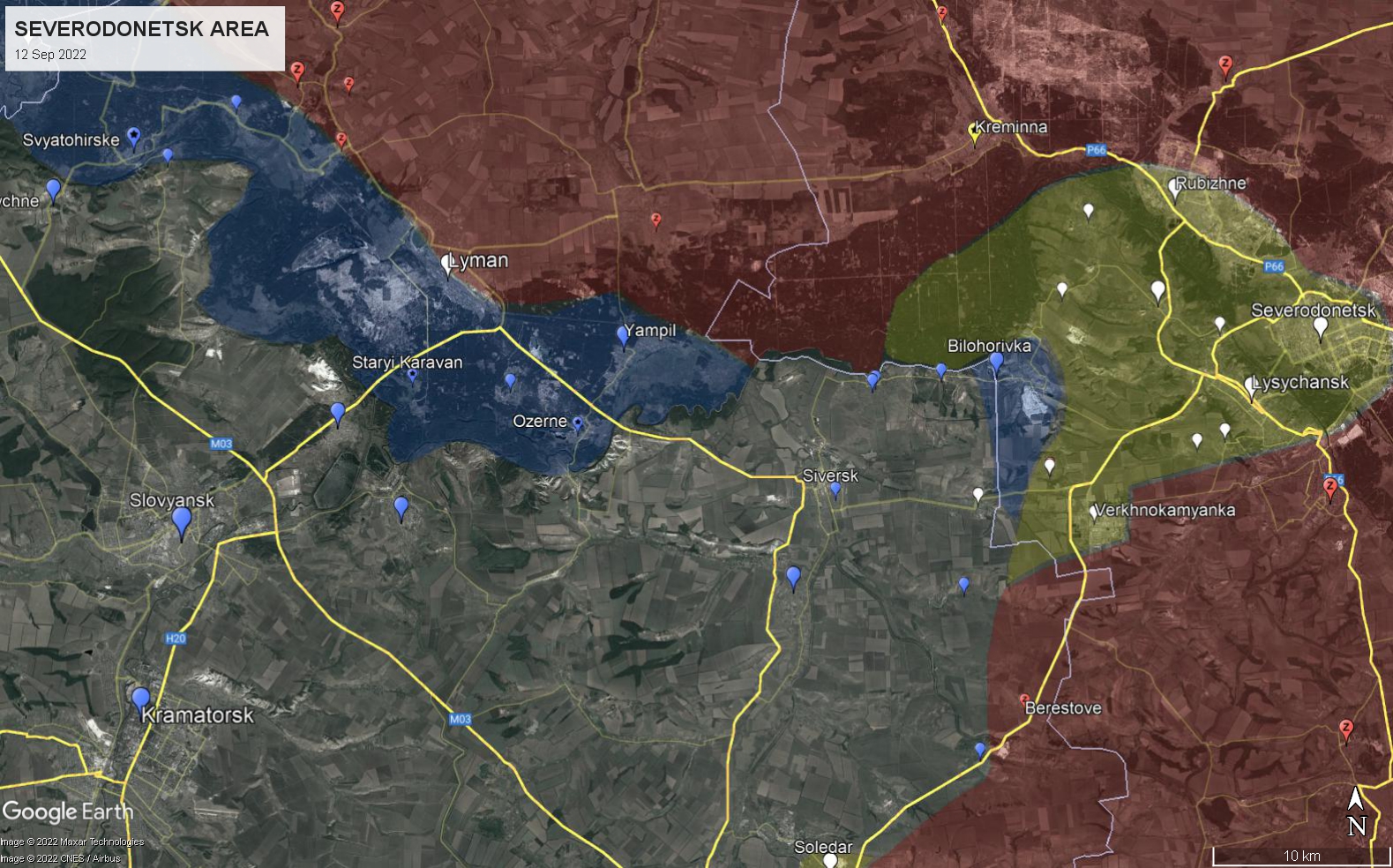 Something odd going on in Kreminna

What’s certain is that Ukrainian forces have reversed months of exceedingly slow “progress” in this area by Russian troops. Ukrainian forces have been engaged in Lysychansk, and Severodonetsk, and in Rubizhne. It’s unclear what scale of conflict is underway in any of these places. From the videos, it’s not even certain there is conflict, as most of what’s out there is people driving past signs. But it seems that Ukraine hasn’t liberated any of these cities, as satisfying as that might be to imagine.

Even in the murkiness of the post-counteroffensive chaos, this area is especially dark.

However, there is one decidedly odd report. In the town of Kreminna, northwest of Rubizhne, Russian forces have reportedly completely left. There are other locations where this has happened, but regional DPR or LPR conscripts remained. In this case, even the regional troops are reported to have gone. So Ukrainian partisans have reportedly taken the lead to declare the town liberated and raise a Ukrainian flag. The reports agree that there are no Ukrainian soldiers present; just some townsfolk and a flag. So I’ve given the town a unique color to represent its unique status: self-liberated (actually, it may not be unique as the same thing has reportedly happened in Starobilsk, but that’s a major city, deep in Luhansk, and it’s going to take more than a couple of reports before I believe it).

If a garden snail started its 50km journey from Lysychansk to Bakhmut on 3 July, when Lysychansk fell, at the speed of 0.05km/h, it would have already made it to Bakhmut and almost made it halfway back. Unlike Russians. 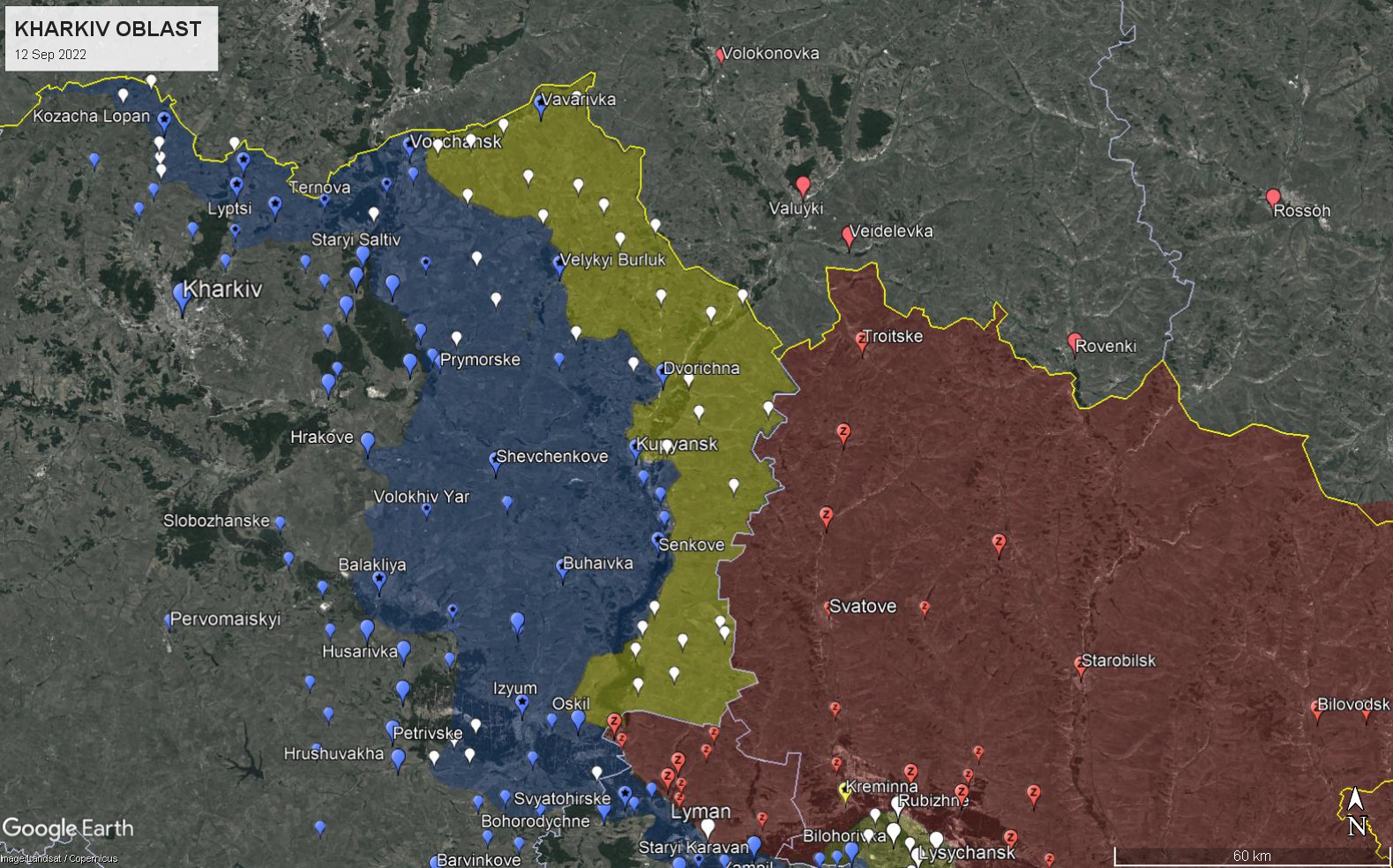 In Kharkiv Oblast, I’ve spent the better part of the day going location by location, trying to find confirmation that sites really have been liberated. We finally have that confirmation for such important locations as Lyptsi—meaning Russia is no longer in position to shell the city of Kharkiv, a huge accomplishment all on its own. There are also confirmations for a string of towns and cities along the Oskil River. A few spots, like Vavarivka in the north, have checked in, but I’m still waiting for confirmation that Ukraine has full control over towns on the east side of the Oskil, which is a critical factor in moving toward those locations north of Lyman.

This seems to match this map from the Russian military, which rather than ceding the entire oblast, as was announced, still holds on to that part of Kharkiv east of the Oskil.

Give it another couple of days, and we’ll see if that line holds. There are reportedly intact bridges across the Oskil north of Velykyi Burluk, and Vovchansk is on the east side of the river. In fact, that whole westward-pointing arm on this map appears to be in Ukrainian hands. So Russia already has less than what they show here.

All those areas where Russian forces are reportedly abandoning the town, and leaving the holding of that location to LNR or DPR conscripts? Here’s a good thread on what that means. Svatove is another location where this is reportedly the case.

A damning account of a DPR company in Ukraine:

Equipment:
‘The company is mostly armed with outdated AK-74 variants and weaponry from the 1930s is commonly used.

They have been given 2 grenade launchers in total, and one DShK gun, which nobody in the company knows how to use.

It’s impossible to watch this without crying! This is how Ukraine’s fighters are greeted in the liberated territories. Emotions are running high!
[Sound on] pic.twitter.com/IyDs0rhbvh