Central banks in London and Washington look set to impose more sharp rate hikes next week after figures on both sides of the Atlantic showed inflation pressures are not going away.

The dollar soared as US inflation data for August came in at a higher than expected 8.3 per cent yesterday.

In the UK, figures showing a fall in unemployment to 3.6 per cent, the lowest level since 1974, signalled a tight labour market as in-demand workers push for higher wages. 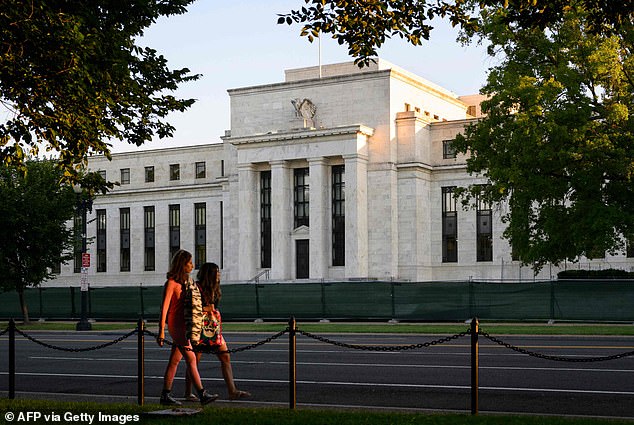 Balancing act: The US Federal Reserve (pictured) and the Bank of England will be focused on trying to cool rampant inflation when they announce rates decisions next week

The US Federal Reserve and the Bank of England will be focused on trying to cool rampant inflation when they announce rates decisions on Wednesday and Thursday next week.

Markets are pencilling in 0.75 percentage point hikes for both. That would mean a hat-trick of super-sized increases in September after the European Central Bank also chose a three-quarter point rise last week.

Neil Wilson, chief market analyst for Markets.com, said the US figures ‘failed to live up to hopes it would show a real sign of cooling in inflation pressure’ and pointed to a ‘prolonged hiking cycle’ for the Fed.

The euro slipped to as low as $0.9971. Stock markets turned red on the prospect of more steep US rate hikes putting pressure on borrowers.

The Fed has been hiking rates to combat inflation, which hit a four-decade high of 9.1 per cent in June. August’s reading of 8.3 per cent was down from 8.5 per cent in July. But it was higher than the 8.1 per cent expected.

Crucially, the ‘core’ rate of inflation – stripping out volatile energy and food prices – climbed from 5.9 per cent to 6.3 per cent amid rising costs for rents and healthcare.

In the UK, the Bank of England has made clear it will keep raising interest rates to try to bring down inflation, even if it brings tough consequences.

Official figures today are expected to show inflation remains high having hit 10.1 per cent in July.

Yesterday’s UK figures showed the proportion of working-age people out of the labour force due to long-term sickness hit its highest level since 2005.