Why is Chris Eubank Sr worried about the rehydration clause for his son’s clash with Conor Benn?

Chris Eubank Jr’s highly-anticipated fight with Conor Benn is less than a month away, and tickets for the O2 Arena showdown sold out in a matter of minutes, with fans desperate to see the latest installment of the Eubank-Benn rivalry.

But will it actually go ahead?

Chris Eubank Sr caused a stir on Monday when he claimed that he had pulled his son out of the fight due to having concerns about the contracted weight. 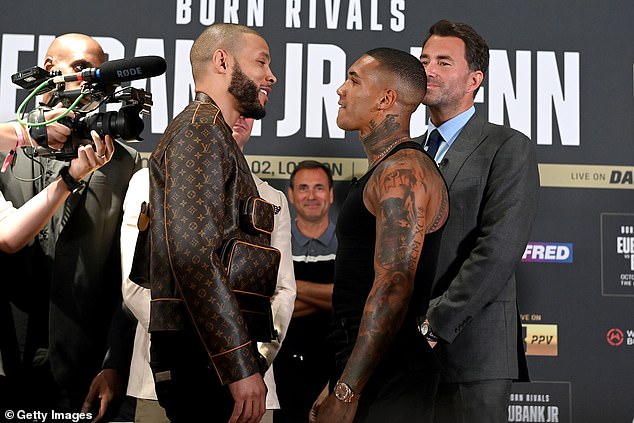 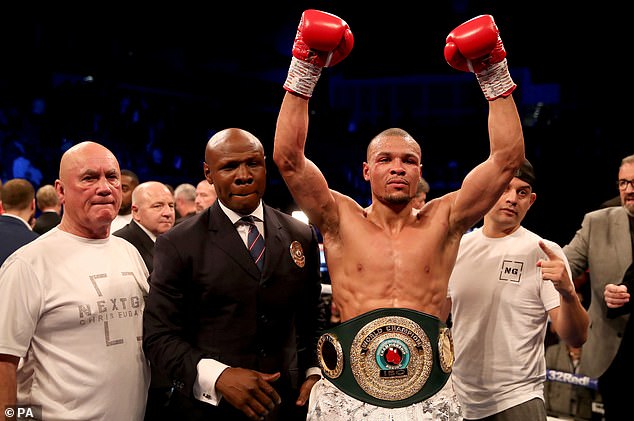 Eubank Jr is set to drop to 157 pounds for the bout – a weight he has never previously fought at as a professional – and Eubank Sr is not prepared to let him do it.

‘My son’s life cannot be put in danger… I’ve already lost one. It can’t happen again.’ he told Sportsmail.

When pushed further over whether he would tell Eubank Jr that the fight was off, Sr replied: ‘Absolutely’.

Eubank Jr’s promoter Kalle Sauerland is adamant that the fight remains ‘absolutely on’, but it seems that Eubank Sr has serious reservations about his son’s health for this catchweight fight. The question is: why? 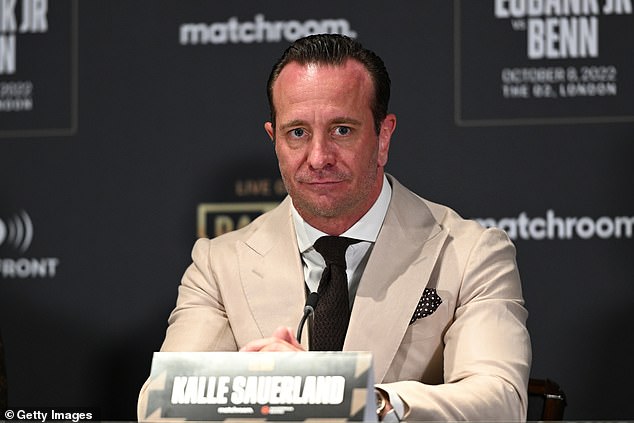 Eubank Jr has fought at the middleweight limit of 160 pounds for the majority of his career, so dropping down three pounds should not be a huge issue.

But there is a rehydration clause in the contract, and former European super-bantamweight champion Spencer Oliver told talkSPORT last month how Eubank Jr revealed to him that he is only allowed to put on five pounds between the weigh-in on Friday and the follow-up weigh-in the next morning.

This means that Eubank Jr will not be allowed to weigh more than 162 pounds on the day of the fight – a significantly lighter weight to that which he would normally operate at.

Will this rehydration clause prove to be a major problem for ‘Next Gen’? Sportsmail has taken a look at when the controversial clause has been brought up in the past, and whether Eubank Sr is right to be worried about it on this occasion.

Floyd Mayweather wanted one against Canelo

Floyd Mayweather’s clash with Canelo Alvarez in September 2013 was a classic case of the old master coming up against the young pretender.

Mayweather was 36 at the time, and the end of his career was in sight, while Canelo had just turned 23 and was quickly establishing himself as Mexican boxing’s next big hope.

With this in mind, Mayweather wanted to gain all the advantages that he could. He initially hoped that Canelo would drop down to 147 pounds to fight him, rather than moving up to 154 pounds himself.

A compromise was reached in the end as the pair agreed to meet at a catchweight of 152 pounds. 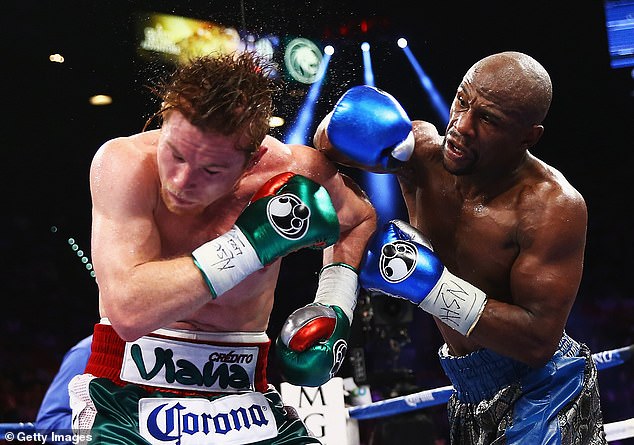 Floyd Mayweather wanted a rehydration clause against Canelo, but the Mexican refused

That wasn’t the end of the negotiations, though. According to Canelo, Mayweather wanted to include a rehydration clause in the contract that would prevent him from getting into the ring as the much bigger man on fight night. However, Canelo revealed that he rejected this proposal.

If Canelo’s version of events is to be believed, this highlights how he was willing to adjust for the weigh-in, but left no room for wiggle room when negotiating a potential rehydration clause.

YouTube sensation Jake Paul is trying to make a name for himself in the boxing world, and he has already learned the tricks of the trade.

He was due to take on Hasim Rahman Jr last month who usually fights as a heavyweight, much like his father, who shocked Lennox Lewis back in 2001.

However, Paul is the naturally smaller man and told Rahman Jr that he would need to come down to 200 pounds – the cruiserweight limit – to fight him.

His demands didn’t end there either. He also inserted a rehydration clause into the contract which meant that Rahman Jr could not weigh more than 215 pounds at the next day weigh-in.

The fight was eventually cancelled after Paul claimed that Rahman Jr could not make weight, which Rahman Jr disputed. 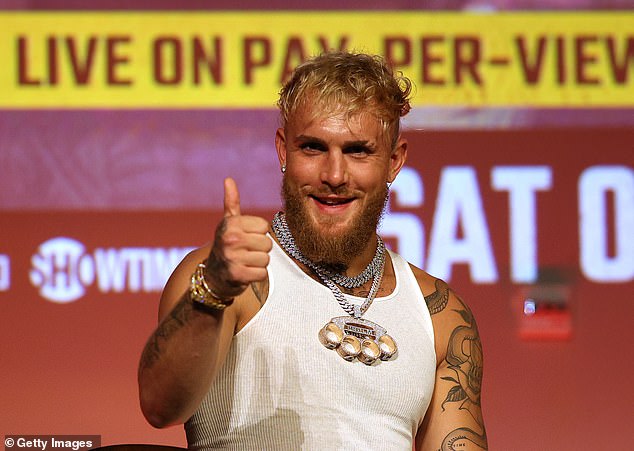 Amir Khan and Kell Brook finally faced each other in February after years of back and forth between the two welterweights.

In the end, they did not even fight at the welterweight limit of 147 pounds as they instead agreed to a catchweight of 149 pounds.

Both men also agreed to a rehydration clause which limited them to weighing no more than 163.5 pounds on fight day. The pair accepted that they would pay £100,000 for every pound that they went over the rehydration limit.

Khan stated that he wanted this in place as he felt that he was the smaller man, and he wanted to limit his physical disadvantages.

Khan and Brook both avoided paying the hefty fine as they weighed in under the agreed limit, and it was Brook who emerged victorious on the night via a sixth-round knockout. 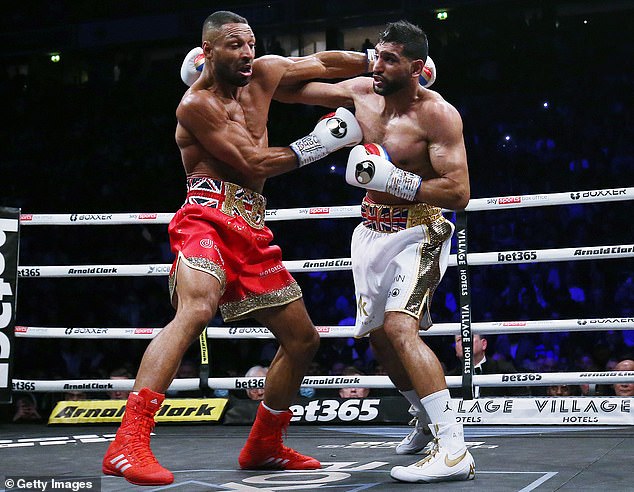 Should Eubank Sr be worried about the rehydration clause?

Rehydration clauses are fairly commonplace in boxing, and have been used in some of the biggest fights in recent years.

Indeed, the IBF stipulate that fighters in world championship bouts under their jurisdiction cannot increase their weight by more than 10 pounds at the next day weigh-in. Brook had to get used to that when he held their welterweight title between 2014 and 2017.

However, the difference between the above examples and the clause that Eubank Jr has agreed to is how few pounds he is allowed to put on. 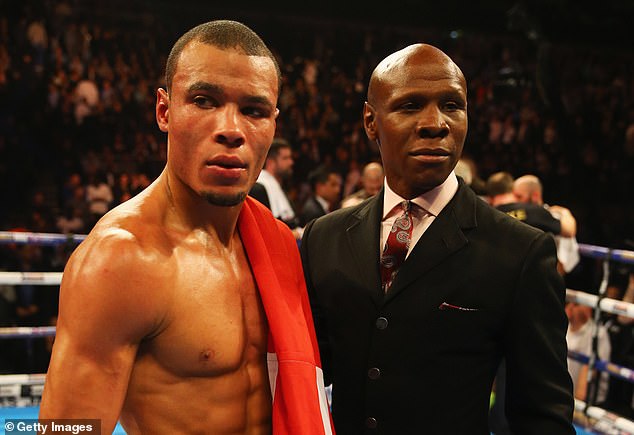 Eubank Jr has looked relaxed in the build-up, but his father may be right to have concerns about the rehydration clause for his fight with Benn

A rehydration limit of 10-15 pounds is hardly unusual, but to set the bar at just five pounds is, and that explains why Eubank Sr is worried.

Eubank Jr has insisted that he will only need to be at 60 per cent to beat Benn, and has been pictured holding a KFC bucket in recent weeks, indicating that he is relaxed when it comes to making weight.

How will he cope with not being able to properly refuel after the weigh-in, though? If Eubank Sr does allow the fight to go ahead, we will soon find out.