Boston Celtics honor Bill Russell by adding his No. 6 to the parquet paint

Boston Celtics honor Bill Russell by adding his No. 6 to the parquet paint with the season-long tribute paying homage to the NBA legend’s ‘dominant play in the paint’

By Isabel Baldwin For Dailymail.Com

The Boston Celtics have painted Bill Russell’s No. 6 into paint on their fabled parquet floor in tribute to the Hall of Famer, who died this summer.

11-time NBA champion and civil rights campaigner Russell died at the age of 88 on July 31.

The Celtics unveiled a new home parquet court ahead of the 2022-23 season to honor him with the season-long tribute to his ‘dominant play in the paint’.

Boston added the No. 6 to both lanes to pay homage to Russell’s play in the paint, marking the first time numerical text will be displayed within that area on an NBA court.

The franchise shared a photo of the on-court tribute showing the area painted green with the No. 6 in a lighter shade over the top.

The Celtics added the caption: ‘Be on the lookout for a special tribute to Bill Russell on the parquet this season.’ 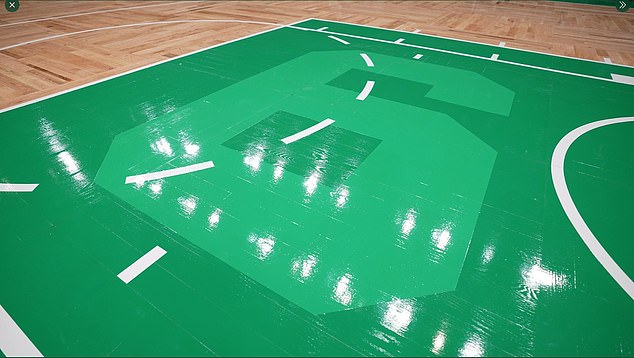 The Boston Celtics have painted Bill Russell’s No. 6 into the in the free throw lanes of their court in tribute to the Hall of Famer who died this summer

Boston unveiled the tribute on social media as they shared a photo of the painted No. 6 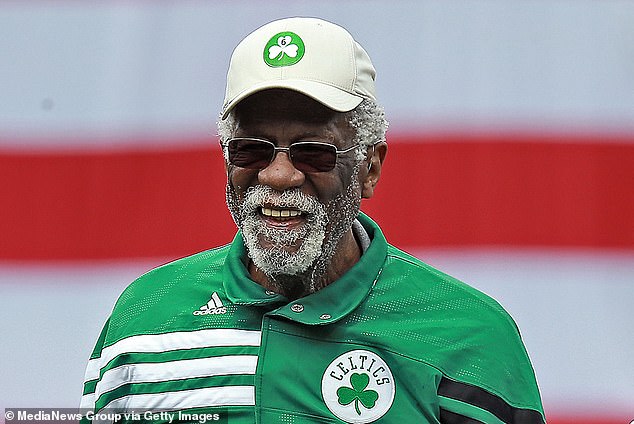 Boston will pay homage to Russell in several other ways throughout the season, including two nights in his honor. The first on October 18 for the season opener and a later one on February 12, which would have been his 89th birthday.

The Celtics will also wear special Russell-themed jerseys for some of their games and their regular uniforms will also have something special on them to honor him.

The league also announced its own tribute to Russell last month as it revealed it was retiring Russell’s jersey number.

Following calls to retire the number in honor of one of the most influential basketball players, in August the NBA and NBPA have decided to never release a No. 6 shirt again. 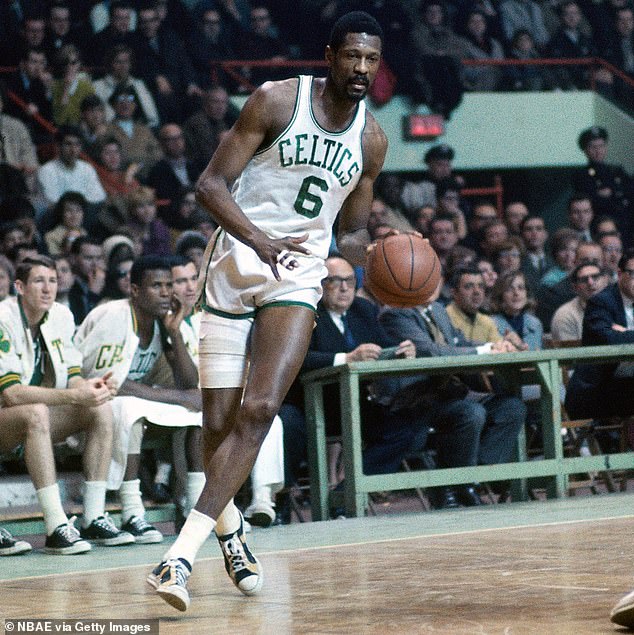 The No. 6 will never be issued by the NBA again after the league revealed they will retire the number as a tribute to Boston Celtics legend Russell (pictured playing in 1967)

‘Permanently retiring his No. 6 across every NBA team ensures that Bill’s transcendent career will always be recognized.’

The No. 6 had already been retired by the Celtics in 1972 but Russell is the first player to have his number removed league-wide.

Los Angeles Lakers star LeBron James and fellow current wearers of the No. 6 will be able to keep wearing it as they will be grandfathered. However, a new shirt bearing that number will not be handed out again. 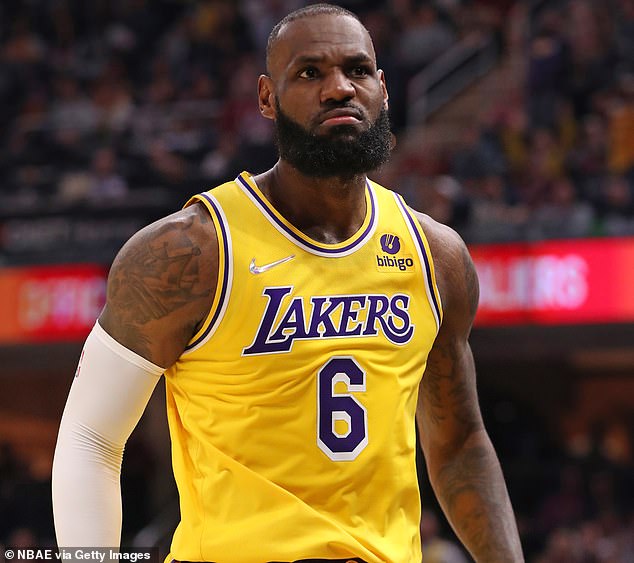 LeBron James wears No. 6 with the Lakers and will be able to keep it as it will be grandfathered

All NBA players will don a patch on the right shoulder of their jerseys this season, the league revealed Thursday, and all NBA courts will have a clover-shaped logo with the No. 6 on the sideline close to the scorer’s table to also commemorate Russell.

Russell’s 11 titles with the Celtics came between 1956 and 1969 in one of the sport’s most dominant eras but while playing for Boston, endured significant racism and abuse.

Russell used his position to push for equality throughout his life. Notably, he was at the March on Washington in 1963, when Martin Luther King Jr. gave his ‘I Have a Dream’ speech, and he backed Muhammad Ali when the boxer was pilloried for refusing induction into the military draft.

Russell also won an Olympic gold medal in Melbourne with the United States in 1956 and two NCAA titles at San Francisco in 1955 and 56, success that paved the way for him to become a five-time NBA MVP and 12-time All-Star. 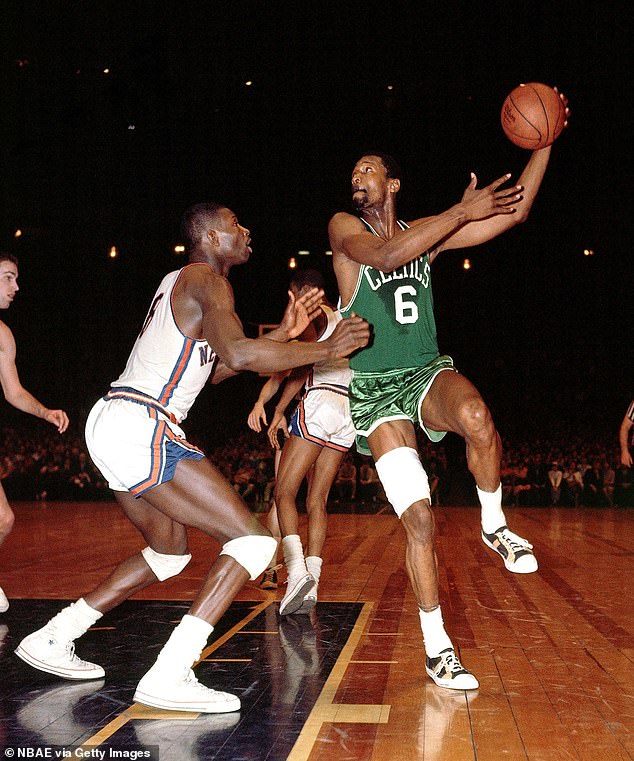 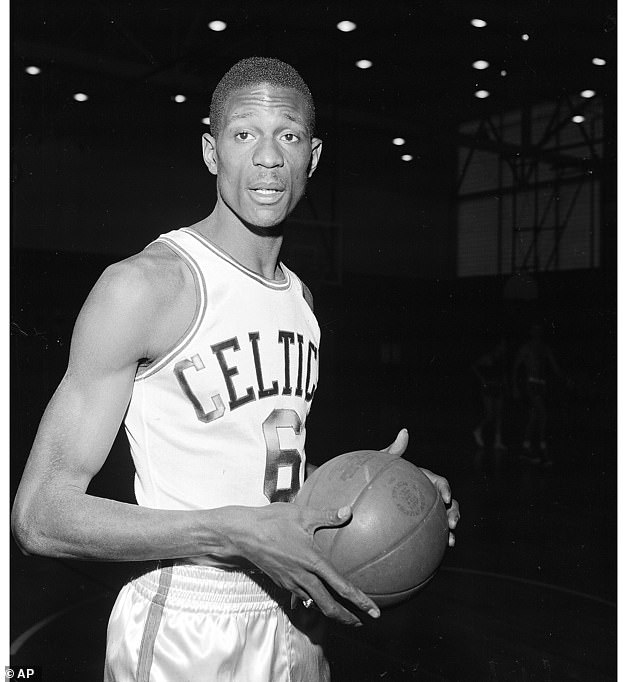 Russell pictured in 1956, shortly after coming out of San Francisco to sign for the Celtics 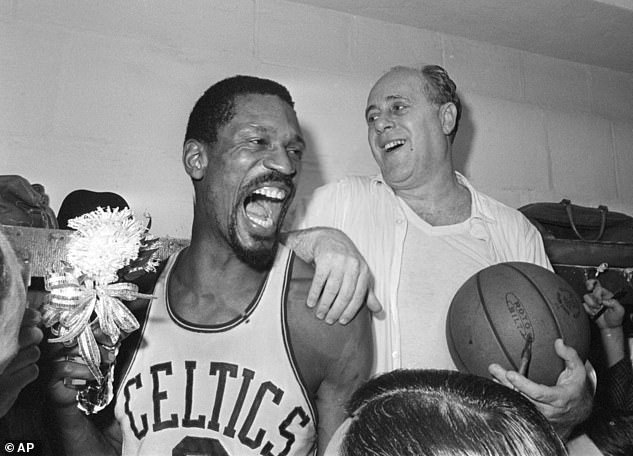 Russell’s 11 titles came between 1956 and 1969 in a dominant era for the Celtics in basketball. In 1966, Russell was named the team’s player-coach by outgoing coach Red Auerbach (right)

In addition to his civil rights work, he’s considered one of the greatest winners in US sports history and the greatest defensive player in NBA history.

The native of Louisiana also left a lasting mark as a black athlete in a city – and country – where race is often a flash point.

In 2011, Russell was awarded the Presidential Medal of Freedom by Barack Obama – the highest civilian honor in the United States.