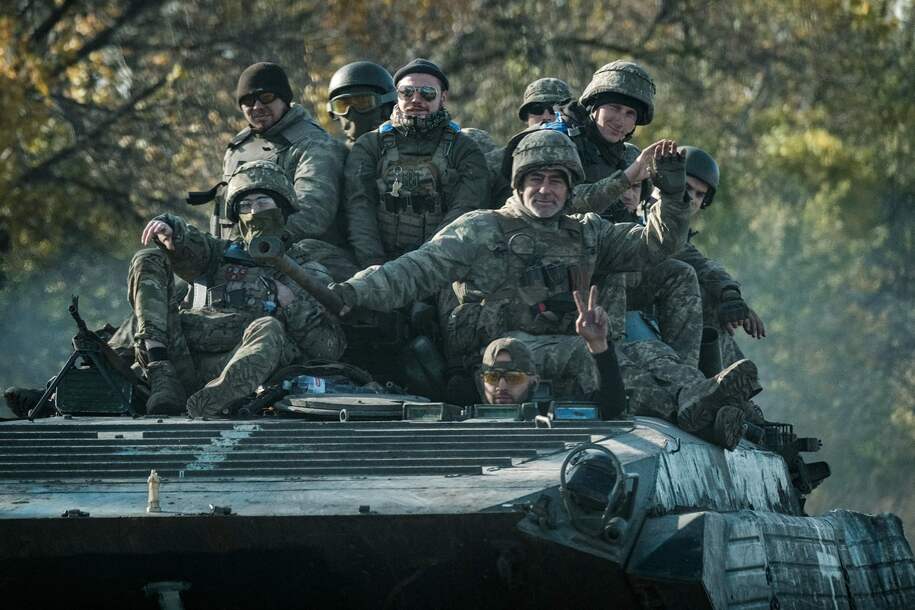 There is just one big question for Russia at the moment as we approach the end of the seventh month of this illegal, unprovoked invasion: What the hell do they think they are doing?

No, seriously. Russia is continuing to make multiple attacks every day around the town of Bakhmut, scrambling to gain a single street, or a single meter, with a high cost in both men and materiel for each gain. If they get Bakhmut, then what? Months of fighting will have carried them an entire 15 kilometers from territory they occupied at the outset of the invasion. And they’ll still be 40 km from the well-defended cities of Slovyansk and Kramatorsk at the heart of Donetsk Oblast.

Meanwhile, Russia is making multiple attempts to gain another block in Bakhmut. It’s continuing to shell dozens of locations. And it’s tossing missiles at civilian targets in Ukrainian cities. Absolutely none of which moves Russia 1 centimeter closer to any of its stated goals, much less anything that looks like winning.

The truth is that even before the Ukrainian counteroffensive in Kharkiv, it was clear that Russia was a spent force. As kos pointed out, their army had culminated. As every map made clear, they were simply incapable of obtaining their objectives. They couldn’t get Kyiv. They couldn’t get to Odesa. They can’t capture all of Donetsk. Now they’ve wasted so much of their strength that it’s debatable whether they can hold on to any of the territory they controlled inside Ukraine when the invasion began. And their response? Just keep wasting more.

A sensible move by Russia at this point would be to figure out if there is any portion of Ukraine it seriously needs to retain, then do everything possible to hold that territory. It’s not clear what they can do. It is clear that wasting more men at Bakhmut only makes Russia’s situation worse.

It’s baffling. It would almost be amusing … if it weren’t real human beings losing their lives, homes, and everything for absolutely no reason. 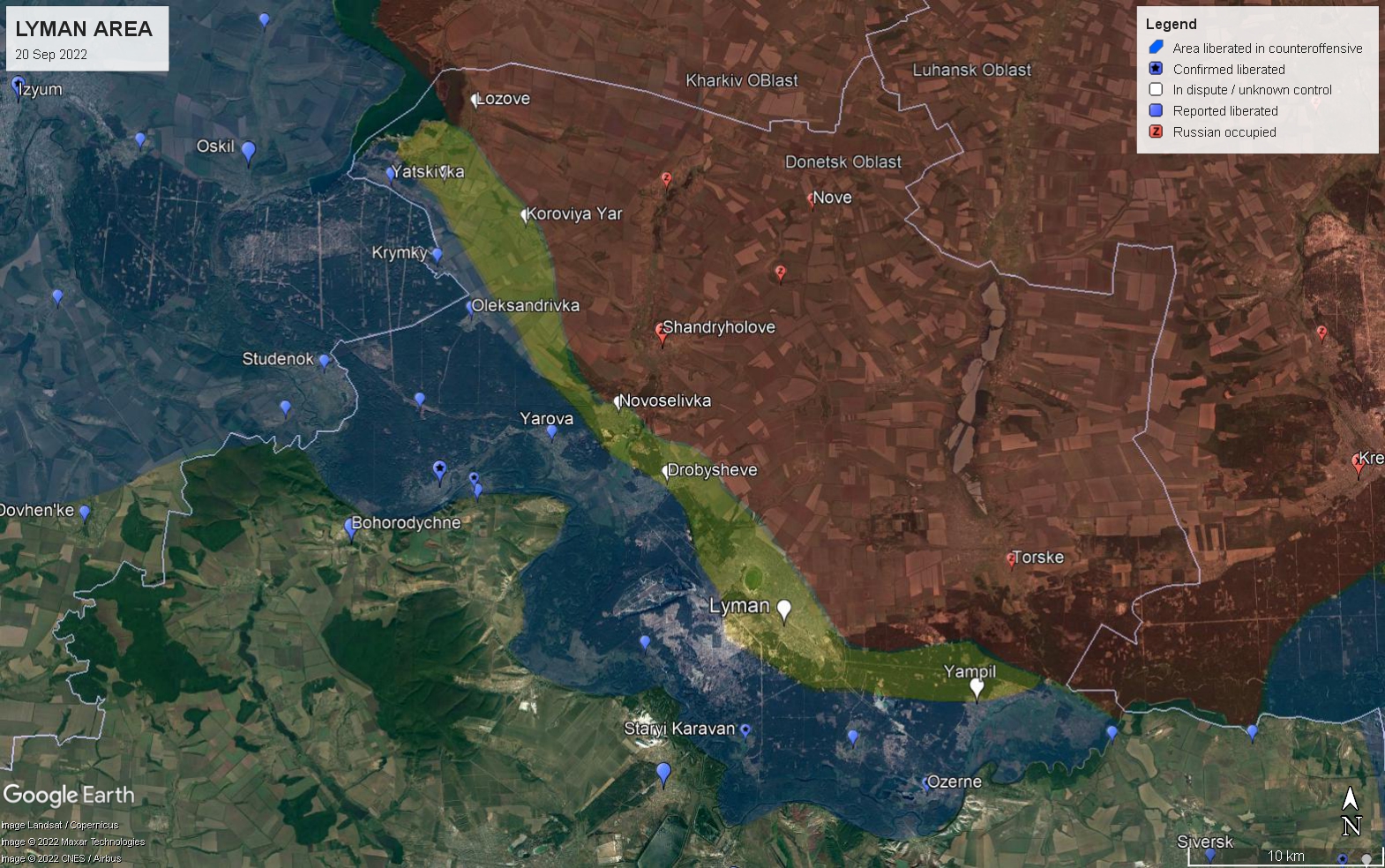 Ukrainian forces are pressing Lyman from all sides.

Looking in detail at the Lyman area, reports from Russians still inside the city on Tuesday morning insisted they were being attacked from three sides: south, north, and northwest.

Even before the Kharkiv counteroffensive, Ukraine had crossed the Siverskyi Donets River in multiple locations, liberated small villages, and moved into both Ozerne and Staryi Karavan. The initial assumption was that these were small groups of Ukrainian special forces simply poking at an area Russia had left lightly defended. However, almost simultaneously with the move in Kharkiv, it became obvious that Ukraine had moved a significant force across the river, and that this force was determined to roll back Russian advances in that area.

Immediately following the liberation of Izyum, it was claimed that Lyman had also been liberated. However, that report was premature, and Ukrainian forces had only reached the southern edge of the city. At least three Russian battalion tactical groups retreating from Izyum were repositioned at Lyman, and they joined with existing Russian troops in the area to try and hold back the Ukrainian advance.

Since then, Ukrainian forces have pivoted around the south end of the reservoir east of Oskil to take Yatskivka. Additional Ukrainian forces have crossed the river both east and west of Lyman, taking Yarova on Sunday, Krymky and Oleksandrivka on Monday, and continuing to press both north and east. Reports on Tuesday indicated that both Rubtsi (near Yatskivka) and Koroviya Yar had been liberated. If true, this would be another advance of 3-4 km along much of the line.

Considering the reports that Lyman is being attacked from the north, it seems likely Ukraine has already liberated Novoselivka and Drobysheve, though this is just speculation. 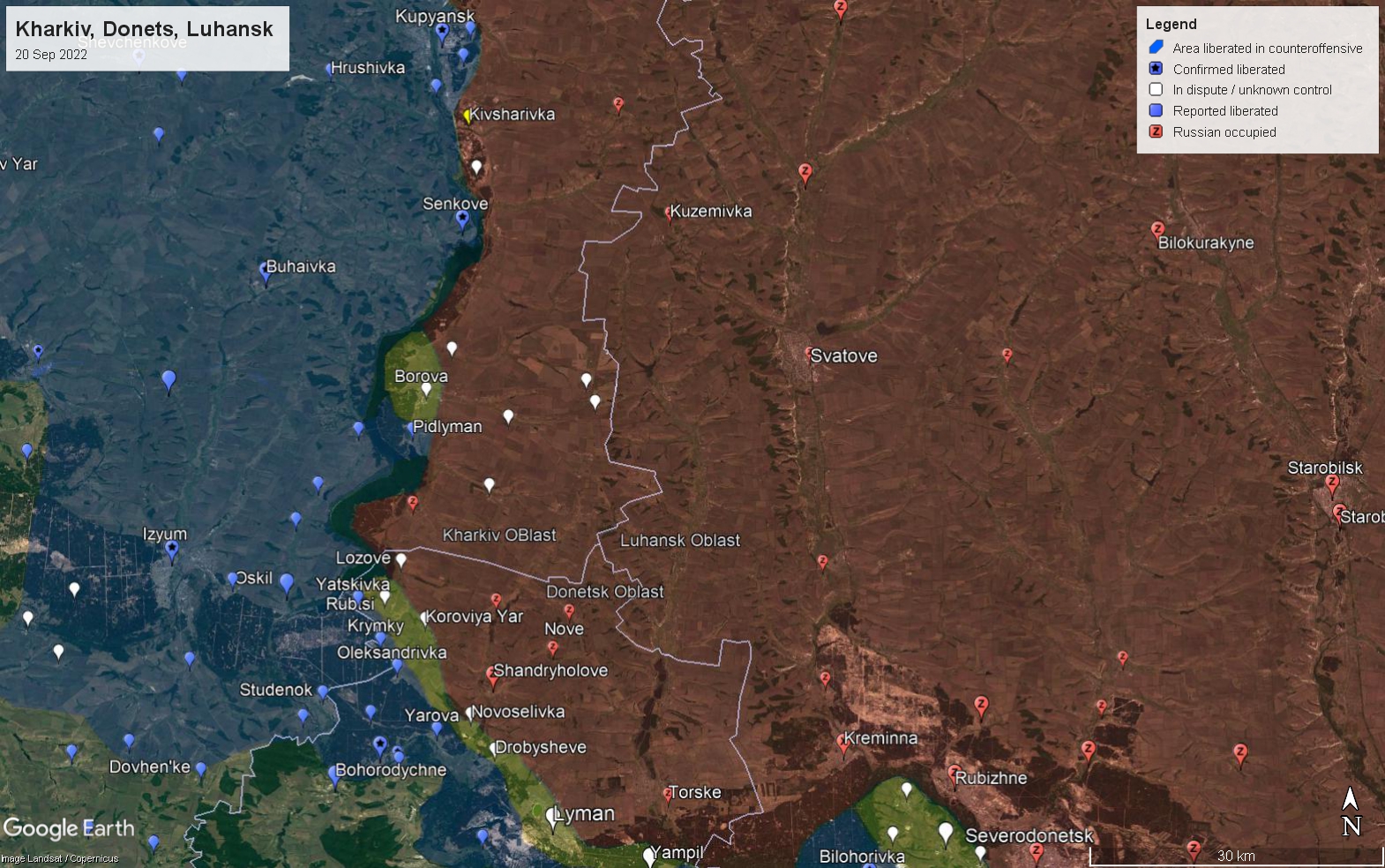 Ukraine is across the Oskil River in multiple places.

Stepping back just a bit to look at a bigger picture of the corner of Kharkiv, Donetsk, and Luhansk Oblasts (yes, I realize the map title is missing a “k.” No, I’m not going to redo it), this presents what’s going on at Lyman as part of the bigger picture of what Ukraine is doing in the “greater tri-oblast area.”

Not only is Ukraine across the Siverskyi Donets River at multiple points in the south, they’re across the Oskil River at several points to the west of Russian-occupied territory. Russia has reportedly moved more troops into the area of eastern Kupyansk, but Ukraine still holds the city on both sides of the river. Ukraine has crossed the river at Borova and reportedly captured the town of Pidlyman, which instantly became my favorite Ukrainian town name. And then there’s that force that came east from Oskil, which is not reportedly moving into the area of Lozove.

Russia tried to halt Ukraine’s counteroffensive at the Oskil River for good reason: There’s no comparable geographic boundary for a long way to the east. However, it’s become obvious that Ukraine isn’t going to settle in at the Oskil. Any one of these bridgeheads could turn into a major new eastward advance.

At the very bottom of the map, there was some excitement on Monday with claims from a normally reliable source that Ukrainian forces had liberated Lysychansk and were going on to Severodonetsk. These reports turned out to be another of those “just passing through” visits that generated excitement in the wake of the counteroffensive.

However, reports that Ukraine had liberated Bilohorivka soon after Izyum have proven to be true, with Monday bringing videos of both vehicle traffic and Ukrainian troops on foot that could be geolocated to this area.  Bilohorivka is in Luhansk Oblast, making this the first settlement to be liberated in that area since Ukrainian forces fell back from Lysychansk.

Stay turned for changes. Because they are definitely coming.