Bank of England set to step up the fight against inflation

Yields on two-year gilts – essentially the interest rate which investors demand to lend to the Government – climbed to levels not seen since 2008 at 3.35 per cent.

These short-term bonds are more sensitive to rises in the Bank of England’s main interest rate, and yesterday’s jump signalled investors are expecting Threadneedle Street to push ahead with bumper rate hikes this week. 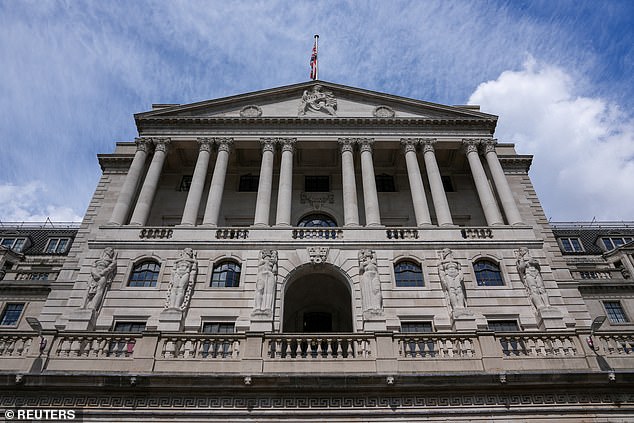 The Bank has been raising rates since December in a battle to tame red-hot inflation. Investors are now expecting a mammoth 0.75 percentage point rise to 2.5 per cent tomorrow in what would be the biggest move for 33 years.

In a sign that traders expect the drastic action to continue, they are pencilling in interest rates of 3.75 per cent by Christmas.

While such a move could help bring down inflation, encouraging saving rather than spending, it would ramp up the cost of debt for mortgage-holders and other borrowers.

Britain’s ten-year gilts also hit their highest level since 2011 – rising to 3.32 per cent – as Liz Truss made the case for tax cuts in a mini-Budget on Friday.

With help on energy bills also in the pipeline, government borrowing looks set to rise.

The more the Government has to borrow through gilts, the more investors will demand to receive in yields.

The pressure in bond markets comes as the US Federal Reserve is due to announce its own interest rate decision today.

The Fed has been aggressive in its fight against inflation, and is expected to announce another 0.75 percentage point hike.

But this has put pressure on other countries to keep pace, as investors flock to the dollar.