Beloved fictional soccer coach Ted Lasso and AFC Richmond will be battling it out against the Premier League elite in FIFA 23, EA has announced.

The fictional team based in Greater London, UK, is the subject of the hit, Emmy award-winning Apple TV+ series in which Lasso, a college football coach from the United States, is hired as a Premier League manager.

Now the American coach will be brushing shoulders with real Premier League elite – in game form at least. 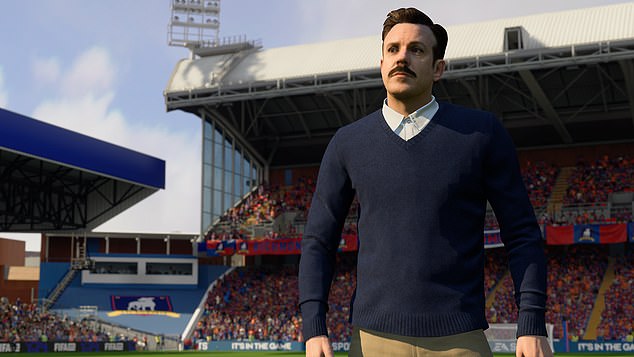 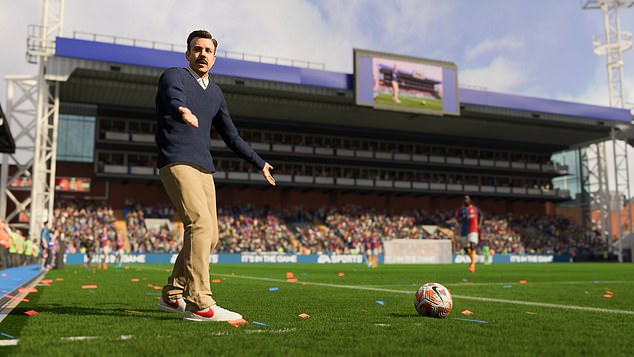 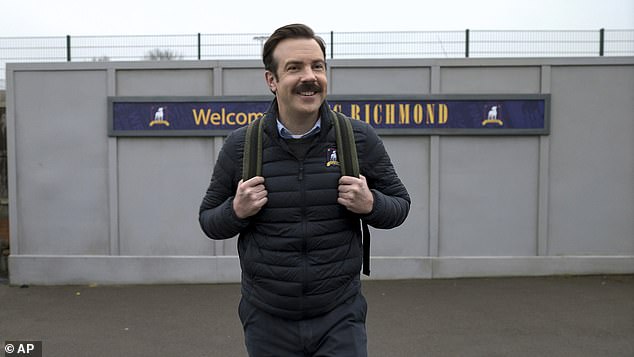 FIFA announced the arrival of Lasso and Co on Wednesday, revealing lead actor Jason Sudeikis’ beloved Lasso will be available as a selectable manager of AFC Richmond in Career Mode, as fans can play as their favorite mustached manager running the show for AFC Richmond or any team of their choosing.

If players prefer stepping into Lasso’s shoes themselves and delivering a motivational pep talk of their own, they can create their own manager to take charge of the Greyhounds.

AFC Richmond’s star players, such as Roy Kent, Jamie Tartt, Sam Obisanya and Dani Rojas, will all be available as part of the Greyhound’s squad in the ‘rest of the world’ league in Kick Off, Online Friendlies and Online Seasons.

Richmond’s iconic home ground, Nelson Road, which is modeled on and filmed at Crystal Palace’s stadium Selhurst Park, will also feature in the game. 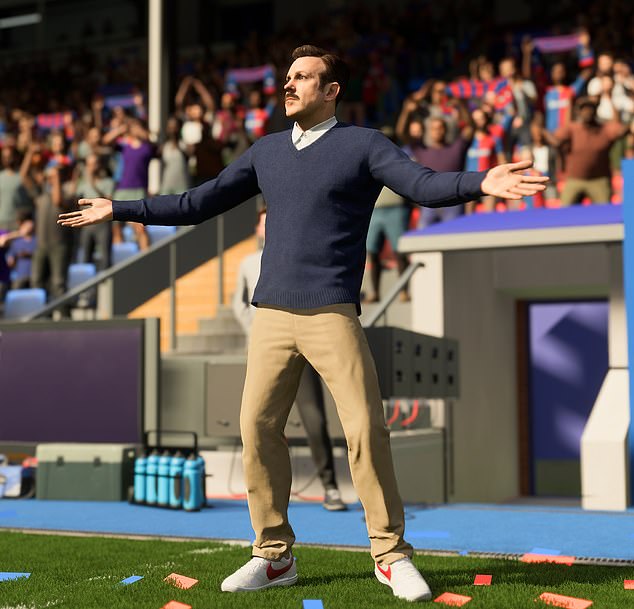 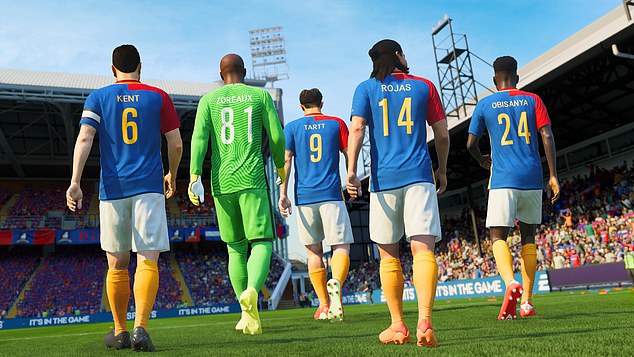 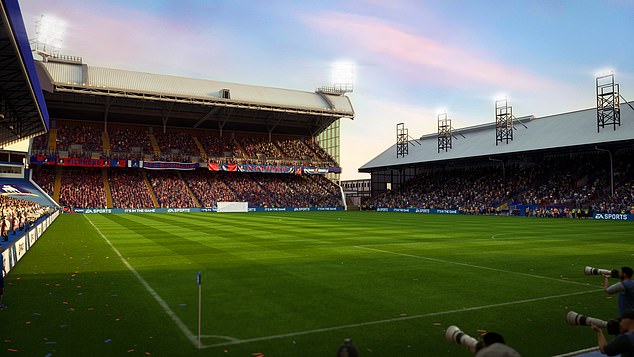 The upbeat and folksy American coach is brought to life on screen by Sudeikis who called the FIFA cameo one of the special moments of his career.

‘I am truly fortunate, and deeply grateful, to have had many special moments in my career thus far, and I consider this experience among the best of them,’ said Emmy Award-winner Jason Sudeikis, who plays the beloved soccer coach.

‘As long-time fans of EA SPORTS FIFA, having Ted Lasso and the whole AFC Richmond squad incorporated into the newest version of the game is truly a dream come true for myself and the rest of the fellas.

‘Our cast and crew work tremendously hard on this show, and we are flattered that it resonates with so many folks. We look forward to our fans having the opportunity to play with, play as, and even play against their favorite AFC Richmond characters.’ 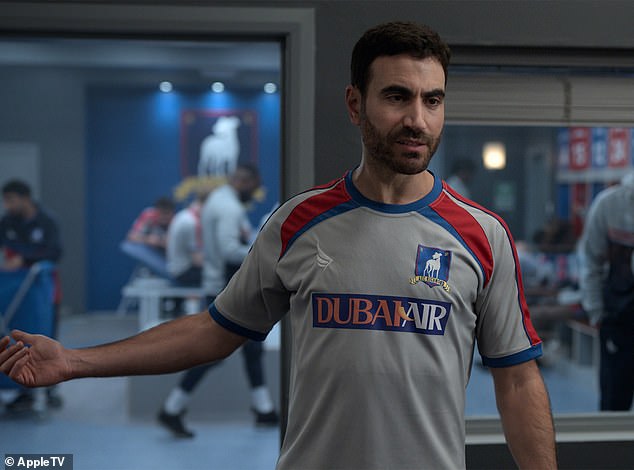 Brett Goldstein, a co-writer on the show and actor who stars as player-turned-coach Roy Kent said it was ‘so f***ing cool to be in FIFA’

‘It is so f***ing cool to be in FIFA. I’m not sure this is going to help dispel the CGI rumors but f*** it, totally worth it,’ said Emmy Award-winner Goldstein.

‘I look forward to beating my nephew in a game with me as Roy Kent and him as Jamie Tartt. He’s gonna be furious.’

As well as playing as the club directly, fans will also be able to unlock related content, such as Lasso and Coach Beard manager items, AFC Richmond kits, badges, flags and of course the iconic Nelson Road Stadium.

The show’s Twitter account hinted at the cameo on Tuesday as it shared a photo of Sudeikis, who plays the manager, being digitally scanned. 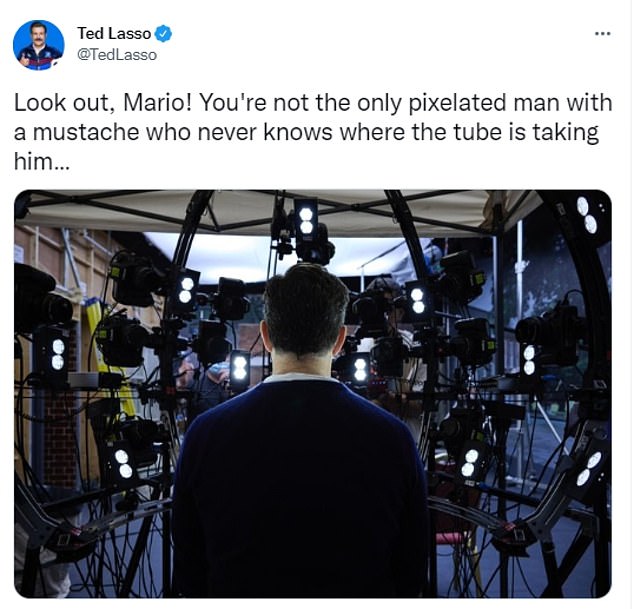 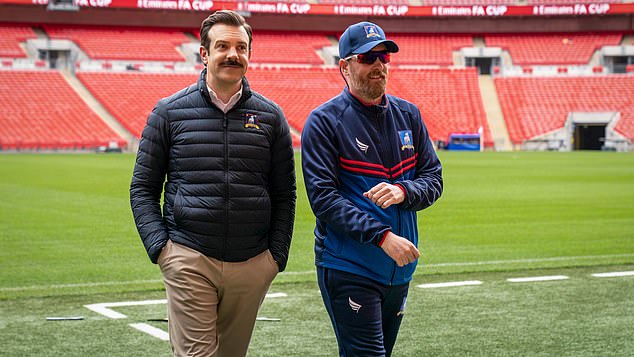 Fictional soccer coach Lasso, played by Sudeikis (left, pictured with Brendan Hunt who plays assistant Coach Beard) and his team AFC Richmond and the subject of the Apple TV+ series

The lead actor could be seen posing for the FIFA team’s facial capture rig, which recreates a person’s likeness for the game. Players are normally scanned in the rig for each game and managers reportedly will be this time around, too.

Along with the photo, the account wrote: ‘Look out, Mario! You’re not the only pixelated man with a mustache who never knows where the tube is taking him…’

Even more telling is the fact that is that EA Sport FIFA responded to the Tweet with a simple side-eye emoji.

It is unclear how Lasso and Co will feature in the game and whether they will available for online play.

It is not the first time the beloved character has made an appearance in a soccer video game either.

Last year, the TV show featured as a little Easter egg in Football Manager 2022 as Lasso’s famous ‘Believe’ could be seen in the dressing room, changing color depending on the player’s chosen team. 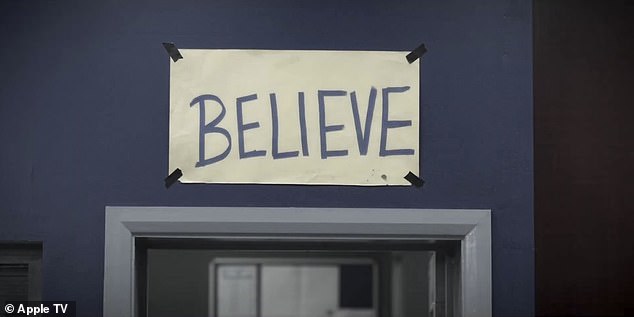 Ted Lasso debuted in August 2020 and has gone on to win 11 Emmys across two seasons.

The series follows Lasso’s unprecedented switch from college football to managing the faltering soccer side.

Over the first two seasons, Richmond are relegated from the English top-flight only to earn immediate promotion back to the Premier League.

Ted Lasso is expected to return to Apple TV+ for a third season but a release date is unknown.