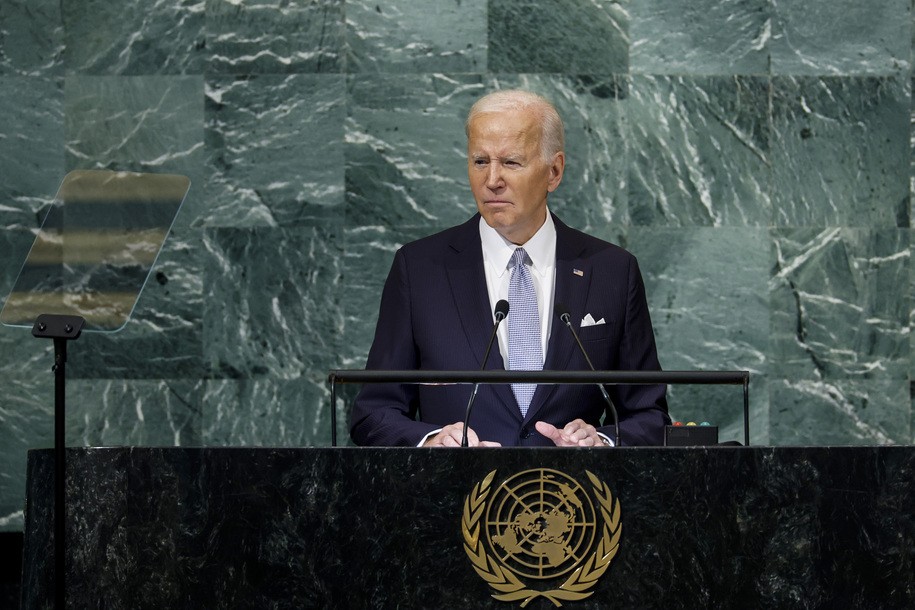 On Wednesday, President Joe Biden stepped to the podium at the United Nations General Council and took both Russia and Vladimir Putin to task. Biden pulled no punches in going after Russia for its “brutal, needless war” in Ukraine, for overt threats of nuclear war, and for violating the most basic principles of the United Nations.

Biden spoke directly to the increased threat created on Tuesday by Putin’s “partial mobilization” that would allow them to draft hundreds of thousands into the Ukraine invasion. He also addressed the “sham referendums to try and annex parts of Ukraine,” which Biden described as “an extremely significant violation of the U.N. charter.”

In response to Russian claims that they had to invade Ukraine because they were threatened, Biden said “no one threatened Russia, and no one other than Russia sought conflict.”

“Every victory won in the battlefield belongs to the courageous Ukrainian soldiers, but this past year, the world was tested as well.”

Biden spoke to Russia’s position on the Security Council and how that allows them to hold veto power over any action the United Nations might take. He then called for reforms to how the security council is constituted and operates, so that no single member of that council can use their position to avoid the consequences of actions like those now underway in Ukraine. Among other things, Biden called for increasing the number of both permanent and nonpermanent seats on the council, for bringing in more nations from Africa and South America, and for taking steps to make the use of the veto “extraordinarily rare.”

To be very blunt, let us speak plainly: A permanent member of the United Nations Security Council invaded its neighbor, attempted to erase a sovereign state from the map. Russia has shamelessly violated the core tenets of the United Nations Charter—none more important than the clear prohibition against countries taking the territory of their neighbor by force.

All of this drove to Biden’s central theme: “If nations can pursue their imperial ambitions without consequence, then we put at risk everything this very institution stands for. Everything. Every victory won in the battlefield belongs to the courageous Ukrainian soldiers, but this past year, the world was tested as well. We did not hesitate. We chose liberty. We chose sovereignty. We stood with Ukraine.”

Biden went on to speak to his belief that the defense of democracy is the greatest role of the United States, to talk to the basic purpose of the United Nations as an instrument of global peace, and to speak to the “basic principles” that are enshrined in the charter. He spent time on climate change, including the recently passed legislation in the United States, addressed global health crises, and announced more U.S. aid to global food programs. “In every country in the world, no matter what else divides us,” said Biden, “If parents cannot feed their children, nothing else matters.”

Biden went on to discuss conflicts in other areas, then addressed the issue of nuclear war. “A nuclear war cannot be won,” Biden said emphatically, “and must never be fought.” He stated that the United States would be open to arms control agreements no matter what else is going on around the world. Biden was forceful in saying that the United States would not allow Iran to obtain nuclear weapons, but also insisted that diplomacy was the best method to make that happen.

“And today, we stand with the brave citizens, and the brave women of Iran, who are fighting to secure their basic rights.” Biden declared that those nations that dedicate themselves to protecting the rights of women, all races, and LGBTQ communities will be the nations that succeed.

Biden left the stage to sustained applause. Honestly, if you listen to nothing else, go to the 26:30 timestamp on the video above and listen to Biden’s closing remarks.

“We are not passive witnesses to history. We are the authors of history.”

An interesting thread on what mobilization could mean from the Director of Russia Studies at the Center for Naval Analyses.

A few incomplete thoughts on the question of mobilization. It won’t solve many of the RU military’s challenges in this war, but it could alter the dynamic. Fair to say that these are uncharted waters, and so we should take care with deterministic or definitive claims. 1/