James Bond producers have said the upcoming movies in the franchise will have bigger roles for women and see a more ’emotional’ side to the 007 spy.

Barbara Broccoli and Michael G. Wilson spoke about their plans for the franchise following the departure of Daniel Craig as Bond in No Time To Die.

Producer Barbara, 62, said Daniel, 54, humanised the once-womanising spy and that the character’s ’emotional’ evolution will continue in the next instalment. 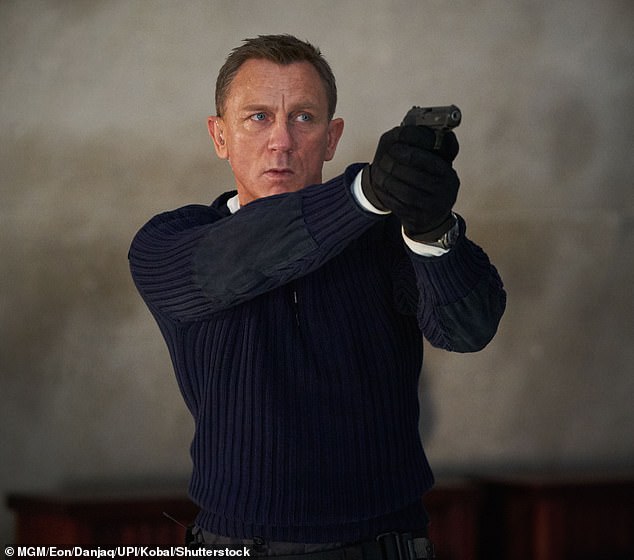 Big changes: James Bond producers have said the upcoming movies in the franchise will have bigger roles for women and see the 007 spy more ’emotional’

She also spoke about how recent Bond films have featured larger roles for women, adding that they plan to incorporate meatier female roles in the new movies as well.

‘It’s an evolution,’ she told Variety magazine. ‘Bond is evolving just as men are evolving, I don’t know who’s evolving at a faster pace.’

Speaking about Daniel’s more humanised version of Bond, Barbara – who produces the franchise with her half-brother Michael – said it was the first time the spy was ‘cracked open emotionally’. 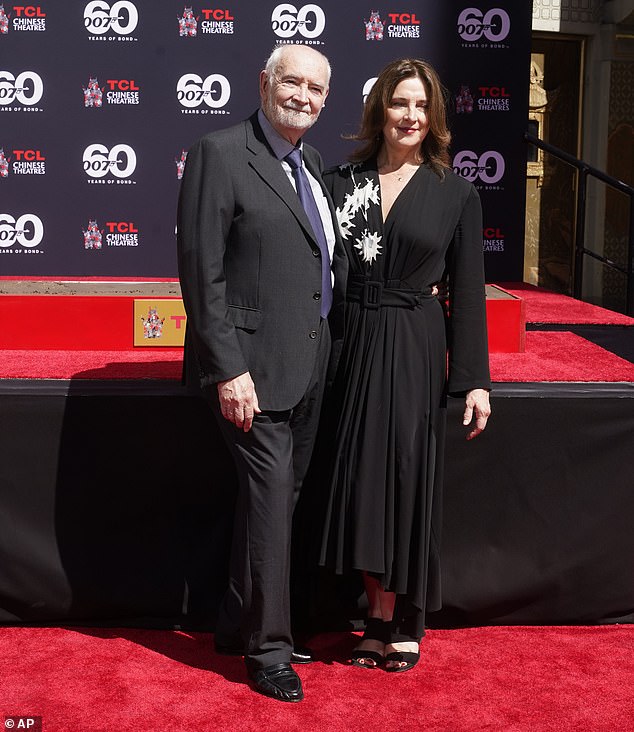 Planning: Barbara Broccoli and Michael G. Wilson (pictured) spoke about their plans for the franchise following the departure of Daniel Craig as Bond in No Time To Die

‘The films over [Daniel’s] tenure were the first time we really connected the emotional arc,’ she said.

Barbara and Michael, 80, also touched on their mission to find a new actor to play Bond, after Daniel stepped back from the role following his fifth and final instalment.

The producers insisted they are yet to decide on who will take on the legendary role, explaining that the next 007 movie is still a ‘couple’ of years away at least.

Addressing rumours that Idris Elba is in line for the part, Barbara said they hadn’t been in touch with the Luther actor recently but insisted they ‘love’ him. 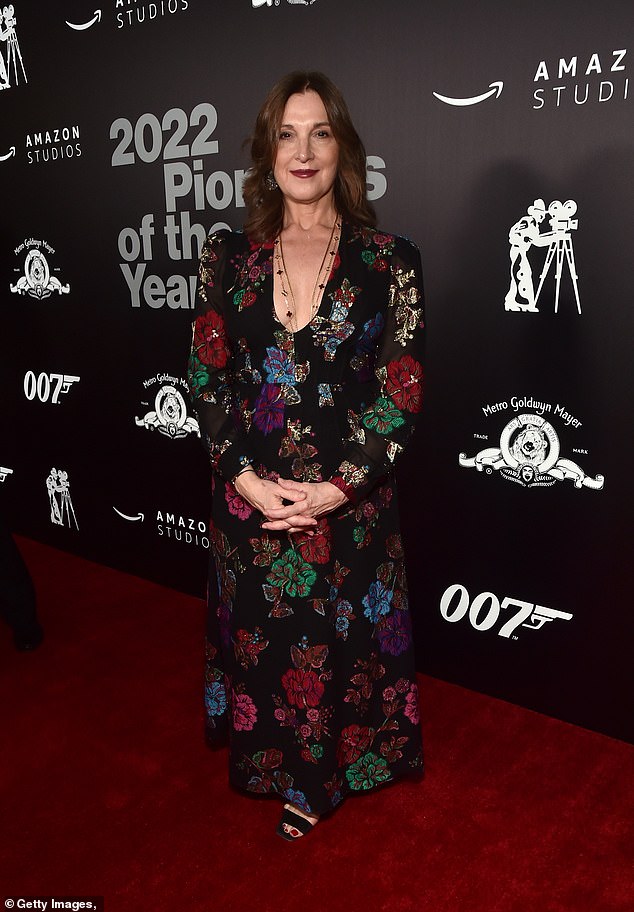 New parts: Barbara also spoke about how recent Bond films have featured larger roles for women, adding that they plan to incorporate meatier female roles in the new movies as well

But they admitted that Idris, 50, may be reluctant to take on such a long commitment, with Michael saying it was hard enough to sign on Daniel when he was in his 30s.

They said there are also similar challenges when considering a much younger actor for the role, saying they need to understand that the part is a very long-term commitment.

Wilson said it is a huge ‘investment’ for Eon Productions to bring out a new Bond, while Broccoli described casting a new 008 as a complete ‘reinvention’.

She said the actor they pick has to be the best fit for their plans for Bond and where they want to take the character in the upcoming films. 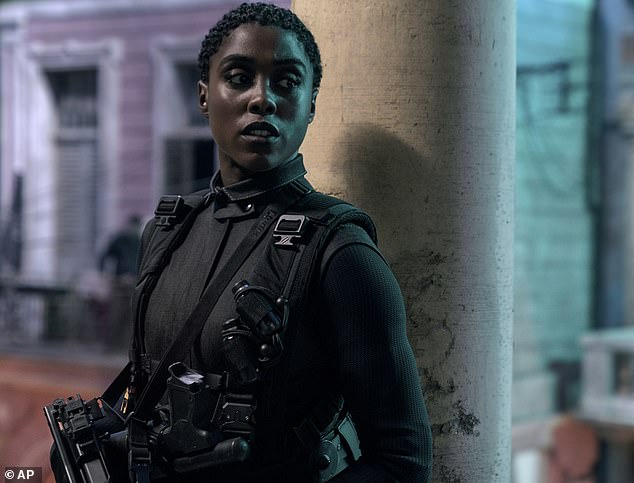 Stars including Tom Hardy, Richard Madden and Henry Cavill have also been tipped as front runners to be cast as Bond, after Barbara confirmed the next agent would be a man.

Venom actor Tom, 45, seemingly confirmed that he wants to be the next 007 – by refusing to talk about the part in fear it will get him blacklisted.

He explained: ‘You know, there’s a saying amongst us in the fraternity of acting, and in the fellowship of my peer group, that if you talk about it you’re automatically out of the race. So I can’t possibly comment on that one!’

While Henry, 39, has been on record for years indicating he’s still interested in the coveted role should an opportunity arise. 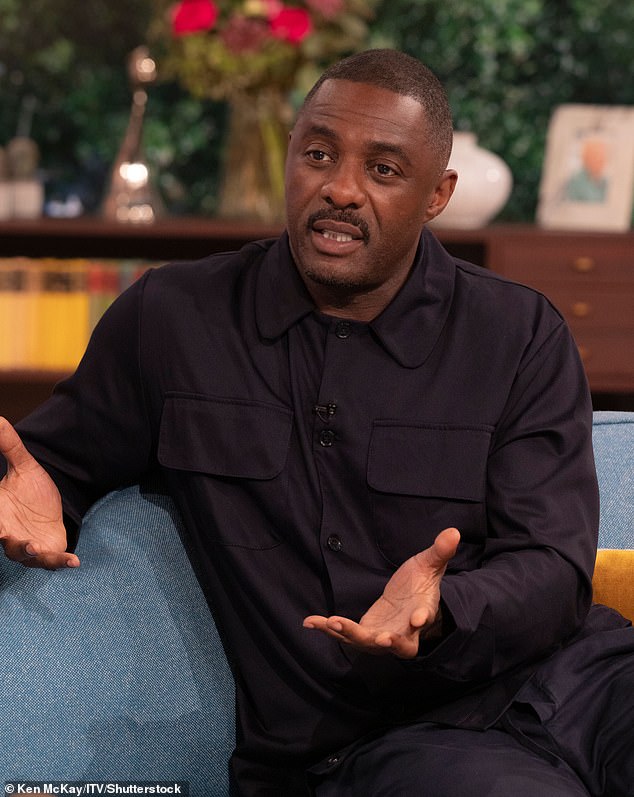 New 007? Addressing rumours that Idris Elba could be the new Bond, Barbara admitted he may be reluctant to take on such a long commitment

He told The Sunday Times in 2021 that ‘time will tell’ if he becomes the latest actor to portray the iconic role, with Daniel Craig exiting the action franchise.

‘You don’t know which direction they want to take Bond in and so I like to say that everything’s always on the table,’ he said.

The Superman star, who was up for the role in 2005 when Daniel was cast, speculated on who could be eyed for the role.

He told GQ in 2020 that he ‘would absolutely jump at the opportunity’ if it arose, as he ‘would love to play Bond’ and that ‘it would be very, very exciting’. 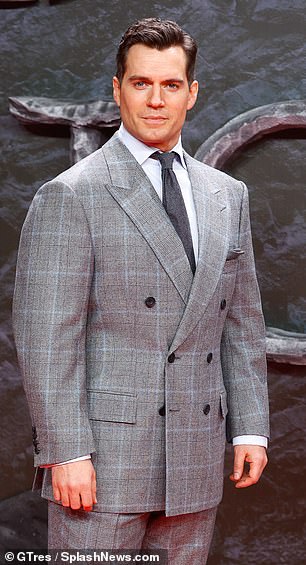 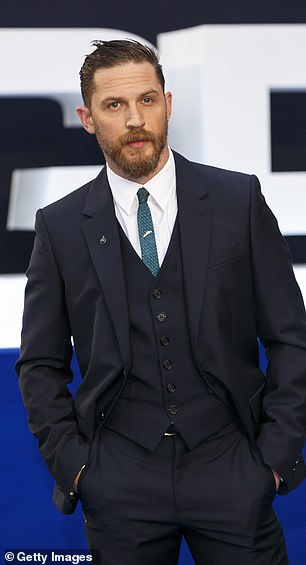 Could it be? No Time To Die marked Daniel Craig’s fifth and final film, raising questions of who will be taking on the role – including Henry Cavill (left) and Tom Hardy (right)

Another favourite is Regé Jean-Page, who admitted last year that he’s ‘flattered’ to be included among a host of British stars tipped for the iconic role.

He told The Mirror: ‘Ah, the B word. I think that if you are British and you do anything of note, that other people take notice of, then people will start talking about that.’

Despite being the bookies favourite, the Bridgerton star said he was bemused by the idea of making any plans at ‘this moment in history’ and has ‘given up’ doing so.

Barbara – the daughter of original James Bond producer Albert Broccoli – has previously told patient fans they could still be waiting some time  for the 26th Eon film as shooting for the next epic is ‘at least two years away’. 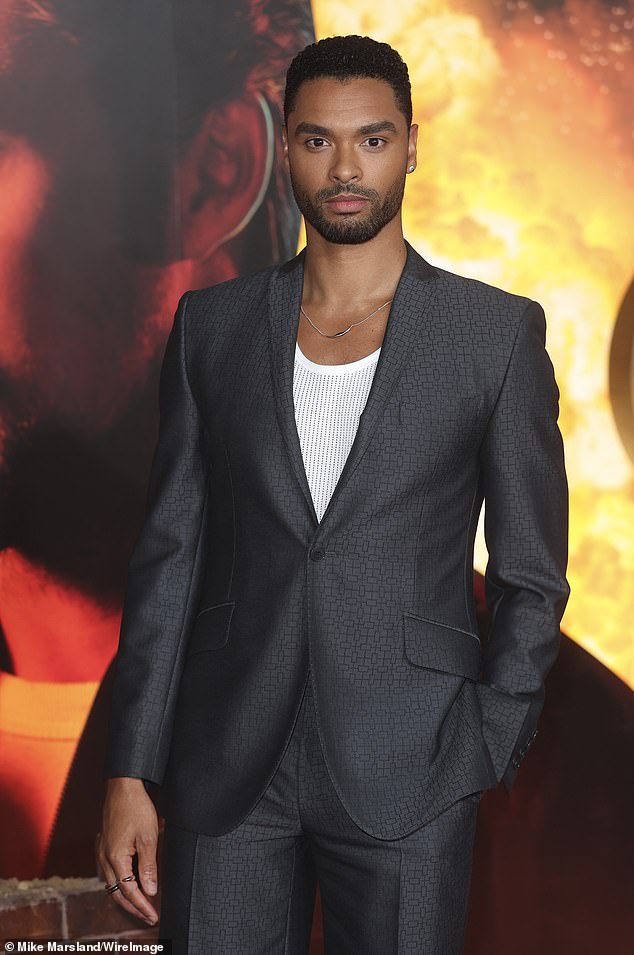 Talented: Bookmakers placed Henry at the forefront with 5/2, while Regé Jean-Page (pictured in July 2022) has odds of 4/1

Speaking at a dinner where she and screenwriter Michael, 80, were awarded BFI fellowships in June, Barbara also hinted at major changes to the character as she said they are ‘reinventing’ the MI6 agent.

According to the Daily Mail’s Richard Eden, she teased: ‘I’d say that filming is at least two years away. It’s a reinvention of Bond.’

She also said she and Michael have not started writing a script for the upcoming 007 film because they want to first make decisions on casting and how they will approach the next instalment.

The half-siblings were handed the reins to Albert Broccoli’s famed Eon Productions in 1995, a year before he passed away at 87 years of age. 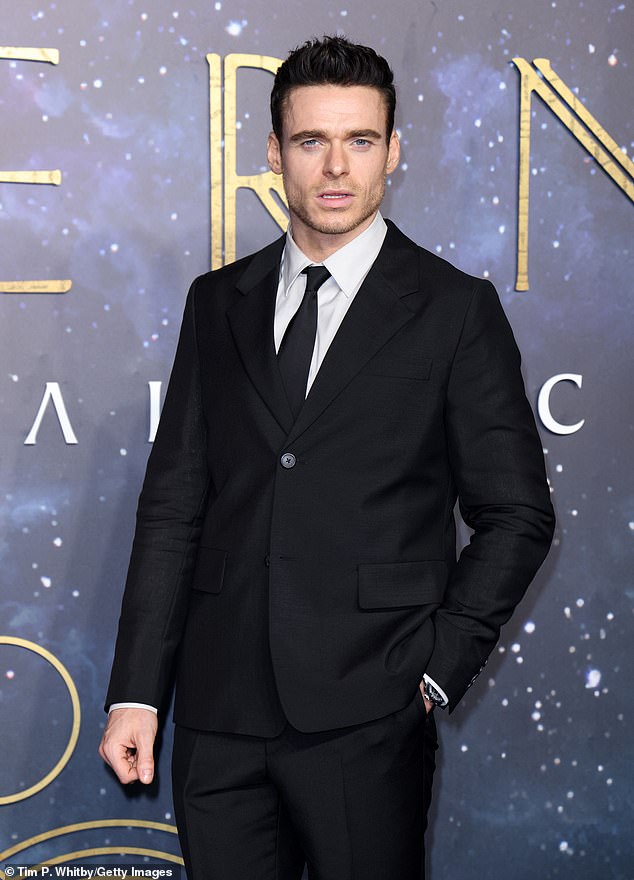 Rumours: Richard Madden, who recently starred in Marvel’s The Eternals, has also been reported to be in consideration for Bond

Barbara and Michael have been in charge of the 007 franchise ever since, casting both Pierce Brosnan and Daniel Craig through their Bond runs.

It comes after Ian Fleming’s Instagram account teased a special announcement coming up for the franchise. The late writer died in 1964.

Sharing a cryptic post of a retro typewriter, the account under the late writer’s name teased the announcement for October 5, which has officially been dubbed ‘James Bond day’.

The post left fans full of excitement, taking to the comments as one wrote that they were ‘eagerly anticipating’ the news. 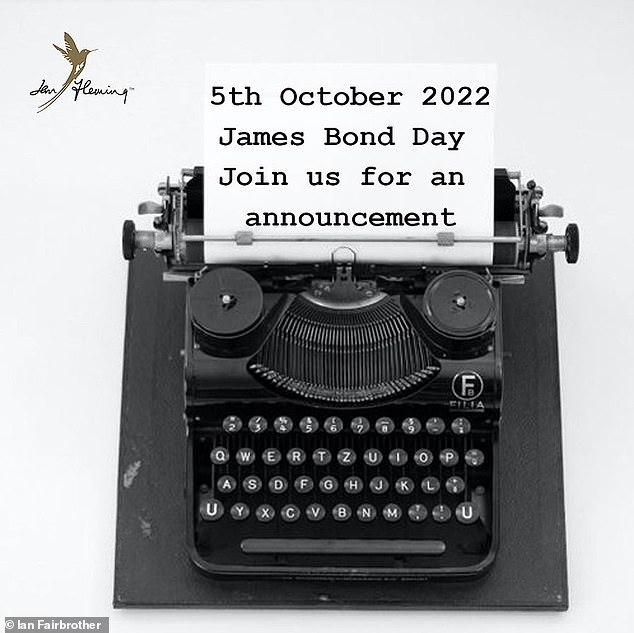 Coming soon: It comes after Ian Fleming’s Instagram account teased a special announcement coming up for the franchise

October 5 is also known as James Bond Day for fans of the long-running franchise – as it is the date of the 1962 World Premiere of the first James Bond film.

This day of celebrations first began in 2012 when the Bond films celebrated their golden anniversary – holding events all around the globe.

Elsewhere, Amazon recently acquired MGM, the studio behind Bond, for £6billion and the deal will see the first ever reality TV series based on the franchise.

Bond: 007’s Road to a Million will see contestants follow clues in an epic worldwide race, competing for a £1million cash prize.

Barbara admitted her reluctance to do a TV show for Bond as they didn’t want the contestants to have to do ‘dangerous’ things, but she insisted filming was perfectly safe. 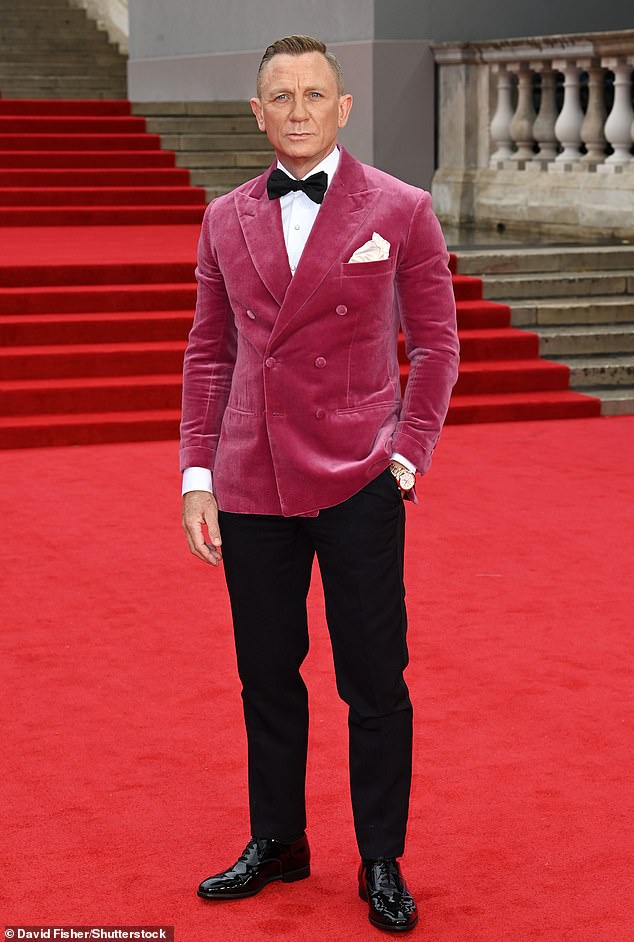 Exit: Barbara and Michael, 80, also said they are in no rush to find a new actor to play Bond, after Daniel stepped back from the role following his fifth and final instalment