After making record interim pre-tax profits in 2021 on the back of surging online demand, the sportswear retailer revealed total profits declined by 18 per cent to £298.3million in the six months to 30 July.

Earnings in its North American division plummeted by almost half from £245.5million to £130.4million, which the firm partly blamed on logistics issues reducing the availability of certain footwear styles. 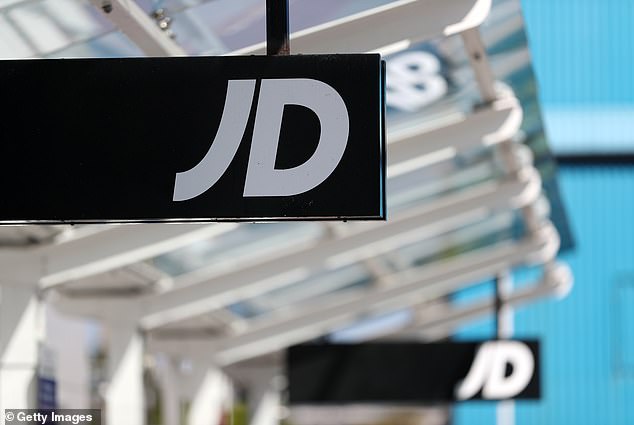 Downturn: After making record interim pre-tax profits in 2021 the sportswear retailer revealed total profits declined by 18 per cent to £298.3million in the six months to 30 July

JD Sports shares fell 5.4 per cent to 117.15p by mid-morning on Thursday, meaning their value has plunged by around 46 per cent so far this year.

The company also struggled against strong comparatives, having benefited in the previous year from the $1.9trillion American Rescue Plan handing out more generous unemployment benefits and direct payments each worth $1,400 to US citizens.

This offset its European business bouncing back from a loss and growing profitability in the Asia-Pacific region, thanks to the absence of Covid-19 restrictions.

Meanwhile, profits in the British Isles fell by 12 per cent to £153million, even though turnover continued rising, due to investment in a new Derby warehouse and the return of full business rates.

JD Sports has been criticised for not repaying the rates relief it received from the UK Government despite posting massive sales and earnings growth, though it recently agreed to return £24.4 million of furlough income.

Total revenues climbed by 14 per cent year-on-year to £4.42billion, with domestic trade benefiting from the rebound in foreign holidays and strong performances by its fashion brands like Tessuti and Mainline Menswear.

Since the end of July, JD Sports said revenues in its organic retail businesses were ahead of the prior year, although UK trade somewhat softened because the warm weather made consumers unwilling to purchase Autumn clothing.

During that time, clothing sales in Britain and many other countries have dropped as surging energy prices and other cost-of-living woes have caused a slowdown in the global economy.

JD’s non-executive chair Andrew Higginson warned that his firm was cautious about trade ‘given the widespread macroeconomic uncertainty, inflationary pressures and the potential for further disruption to the supply chain with industrial action a continuing risk in many markets’.

In spite of this, bosses expect headline profits before tax and exceptional items for this fiscal year to be in line with the record £654.7million it made in the previous 12 months.

Cowgill resigned from his position in May following a series of controversies, which included the UK’s competition regulator fining JD Sports for rule breaking during its disastrous takeover of Footasylum.