Defence giant BAE Systems was one of the biggest risers as Vladimir Putin’s latest escalation of military tensions in Ukraine sparked predictions of more military spending.

The FTSE 100 firm jumped 4.3 per cent, or 33.2p, to 805p after Russia announced plans to mobilise army reservists to support the invasion following a rapid advance of Ukrainian forces that has left the Kremlin on the back foot.

Around 300,000 soldiers are expected to be called up initially, a fraction of what is thought to be a total of 2m. Putin also plans referendums to annex Ukrainian territories, which, alongside a veiled threat to use nuclear weapons, rattled global investors. 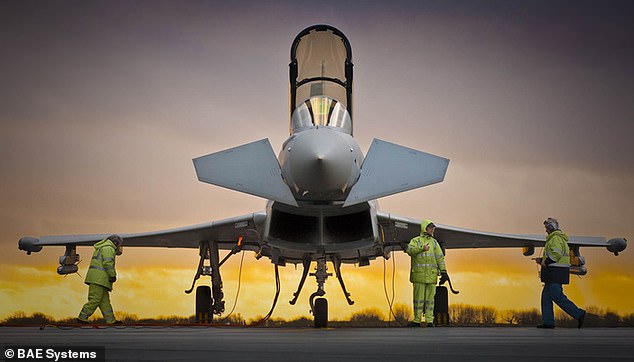 ‘There are growing expectations that there will be heightened demand for military hardware to counter Russia’s aggression, with Nato member countries having already pledged significant increases in spending on defence,’ said Hargreaves Lansdown analyst Susannah Streeter.

The Footsie was supported by the oil giants, which rose on talk the price of Brent crude could rocket over fears the energy crisis will escalate.

Meanwhile, blue-chip firms that earn a large part of their money in overseas currency were boosted by a weakening pound, which dropped to its lowest level against the US dollar since 1985.

Software firm WANdisco surged to its highest level in over a year after landing its largest-ever contract.

The group, which provides services to help firms move and analyse data, has signed a £22m deal with a top ten global communications firm – the fourth between the two –and takes the cumulative total value to nearly £35m.

There was more good news for pharma giant AstraZeneca after EU regulators backed one of its asthma drugs. It rose 0.1 per cent, or 14p, to 10,090p.

Computer game maker Frontier Developments surged 7.7 per cent, or 92p, to 1284p after it reported revenues of £114million for the year to May 31, up 26 per cent on 2021, thanks to strong performances from its new releases including dinosaur theme park simulator Jurassic World Evolution 2. Profits were down at £1.5million from £19.9million due to a one-off charge.

Meanwhile, Keywords Studios, which provides support services to the gaming industry, snapped up Vancouver studio Smoking Gun Interactive in a £26million deal as it reported a pre-tax profit of £34million for the first half, up 78 per cent year-on-year amid high demand. It fell 1.6 per cent, or 38p, to 2312p.

See also  Finance boss of US retailer Bed, Bath & Beyond falls to his death