Shares rose 12.5 per cent, or 17.9p, to 161.4p even as it reported operating losses ballooning more than fourfold to £75.4million for the first half of the year.

The figures showed revenues continuing to grow, up 59.8 per cent to £446.4million, and that two ‘whopper’ clients had been signed up. 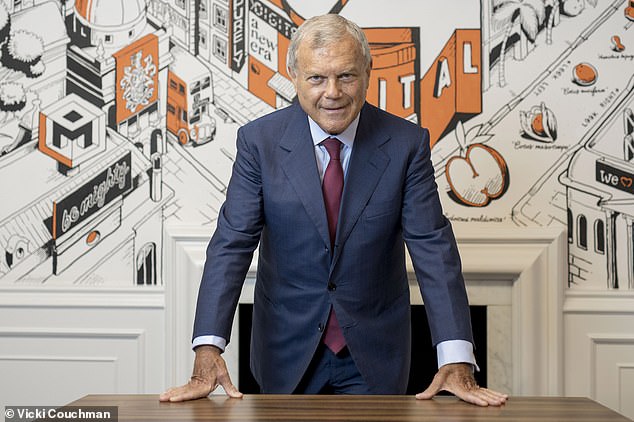 It was forced to delay its annual results this year, in a move that was described by the tycoon as ‘unacceptable and embarrassing’, and warned of lower profits in July as hiring costs surged.

Its woes have left shares 75 per cent lower for the year to date.

But it has now put the brakes on its hiring spree, and signalled a shift in focus away from buying up smaller companies to maximising value from its existing business.

Client wins in the first half included Adobe, Brewdog, Tiktok, Diageo and online firm Booking.com as well as the US account of an unnamed large consumer goods business.

Sorrell sounded an optimistic note. He acknowledged ‘many significant challenges in areas such as climate change, a lengthy war on continental Europe, rising inflation and interest rates, energy shortages, fractious US/China and Western/Russia relationships and with Iran’.

But he said despite this ‘the prospects for digital advertising and transformation remain relatively bright, whilst traditional media languish’.

‘There is evidence that demand accelerates during periods of economic uncertainty as we saw with Covid in 2020, when we performed strongly,’ Sorrell added.

He admitted the first-half profit performance was ‘disappointing’ as cost growth ran ahead of sales but said S4 was acting to correct it.

The ‘whopper’ clients – those with annual revenues of more than $20million (£17.6million) – now total eight, while five more were ‘trending’ towards that status as it targets a total of 20.