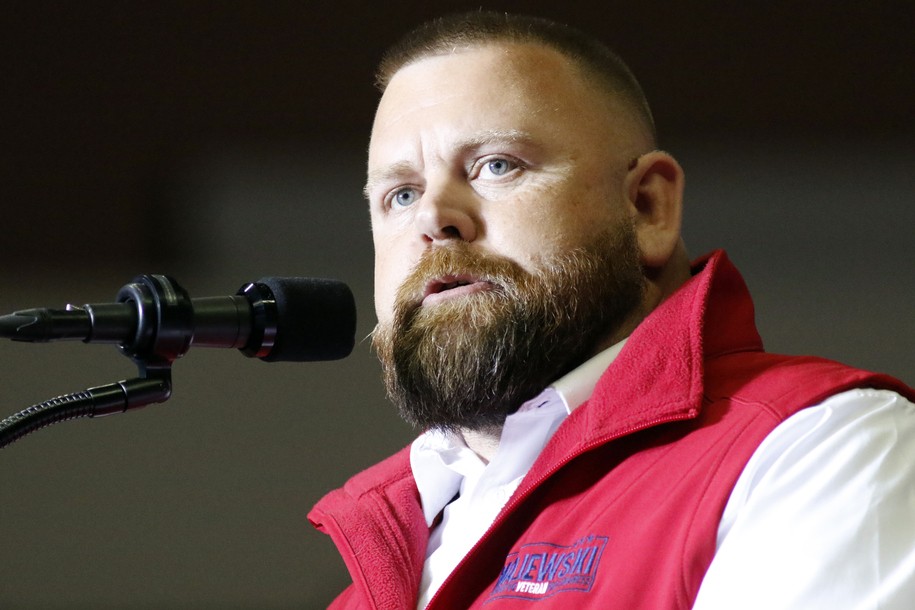 J.R. Majewski, who is running against Democrat Marcy Kaptur for Ohio’s 9th Congressional District, has been campaigning on a hero’s story—one in which after Sept. 11, he was deployed to Afghanistan and suffered under “tough” conditions. The only problem is, according to documents obtained by the Associated Press (AP), Majewski never stepped foot in Afghanistan.

The Associated Press reports that according to military records, Majewski did serve his country. But he served by loading planes in an airbase in Qatar—a U.S. ally that lies 1,153 miles away from Afghanistan. His campaign website reads that he “was deployed to the Middle East in support of Operation Enduring Freedom.”

How much more deplorable can he get? He made up an entire story about how is deployment in Afghanistan (he was in Qatar for 6 months loading planes) prevented him from going to his grandmother’s funeral:

“By the time the chaplain found out where I was in the desert and by the time they got to me, you know, they were already moving on with her funeral. I couldn’t have left and came home, it’s, I could have avoided deploying because it was an optional deployment for me. I wish I could do that over but, you know, she was proud of me, that’s all that matters,” Don Christensen, a retired Air Force colonel, told the Associated Press:

It bothers me when people trade on their military service to get elected to office when what they are doing is misleading the people they want to vote for them … Veterans have done so much for this country and when you claim to have done what your brothers and sisters in arms actually did to build up your reputation, it is a disservice.

I’m a veteran of OEF.

I’d gladly suit up and go back to Afghanistan tonight and give my best to save those Americans who were abandoned.

Why isn’t our “President” all-in?

When forced to respond, Majewski told the Associated Press he was “proud to have served my country,” adding that his “accomplishments and record are under attack, meanwhile, career politician Marcy Kaptur has a forty-year record of failure for [his] Toledo community, which is why [he’s] running for Congress.”

Rolling Stone reports that during another interview, Majewski talked briefly about his military time, recalling to the host he’d served in 2002 and 2003. When asked about what it was like being in Afghanistan, Majewski was cagey, saying he didn’t “like talking about” his experience.

The AP reported on these remarks in its article: Here’s video of J.R. Majewski claiming he served a tour of duty in Afghanistan and then saying, “I don’t like talking about my military experience.” pic.twitter.com/glmlqFmfMW

In 2020, Majewski, who was at the U.S. Capitol during the Jan. 6 insurrection, proudly served former President Donald Trump by dedicating his entire lawn to the 45th president with a 19,000-square-foot “Trump 2020” mural. He later altered the mural to change the zeros to the letter Q, per Business Insider.

NEW: Ohio GOP congressional nominee JR Majewski has repeatedly claimed to not have been a Qanon follower but a review of finds he repeatedly shared Qanon material himself, including this deleted-video he made painting Qs on his lawn.https://t.co/mBa6Z5dbGO pic.twitter.com/PseEhdWcSM

As for Majewski’s role on Jan. 6, he claims he never entered the Capitol and therefore broke no laws. But according to the Associated Press, he has said he was “pissed” at himself for not going inside.

The Associated Press reports he later condemned the insurrection and even called for those who did go inside—narrowly avoiding a self-condemnation of his own actions—to be “punished to the fullest extent of the law.” He also continues to allege that the 2020 election was stolen.

Majewski, who is an Air Force veteran, has also claimed to be an “executive in the nuclear power industry.” He is not.

A spokesperson from Holtec International, where he worked most recently, told the Associated Press he was an employee but refused to say more.

Good judges are more important now than ever. In some states, judges are on the ballot this November. Tune in to this week’s The Downballot to listen to Justice Richard Bernstein talk about what being on the Michigan Supreme Court has been like, and how his re-election campaign is shaping up.