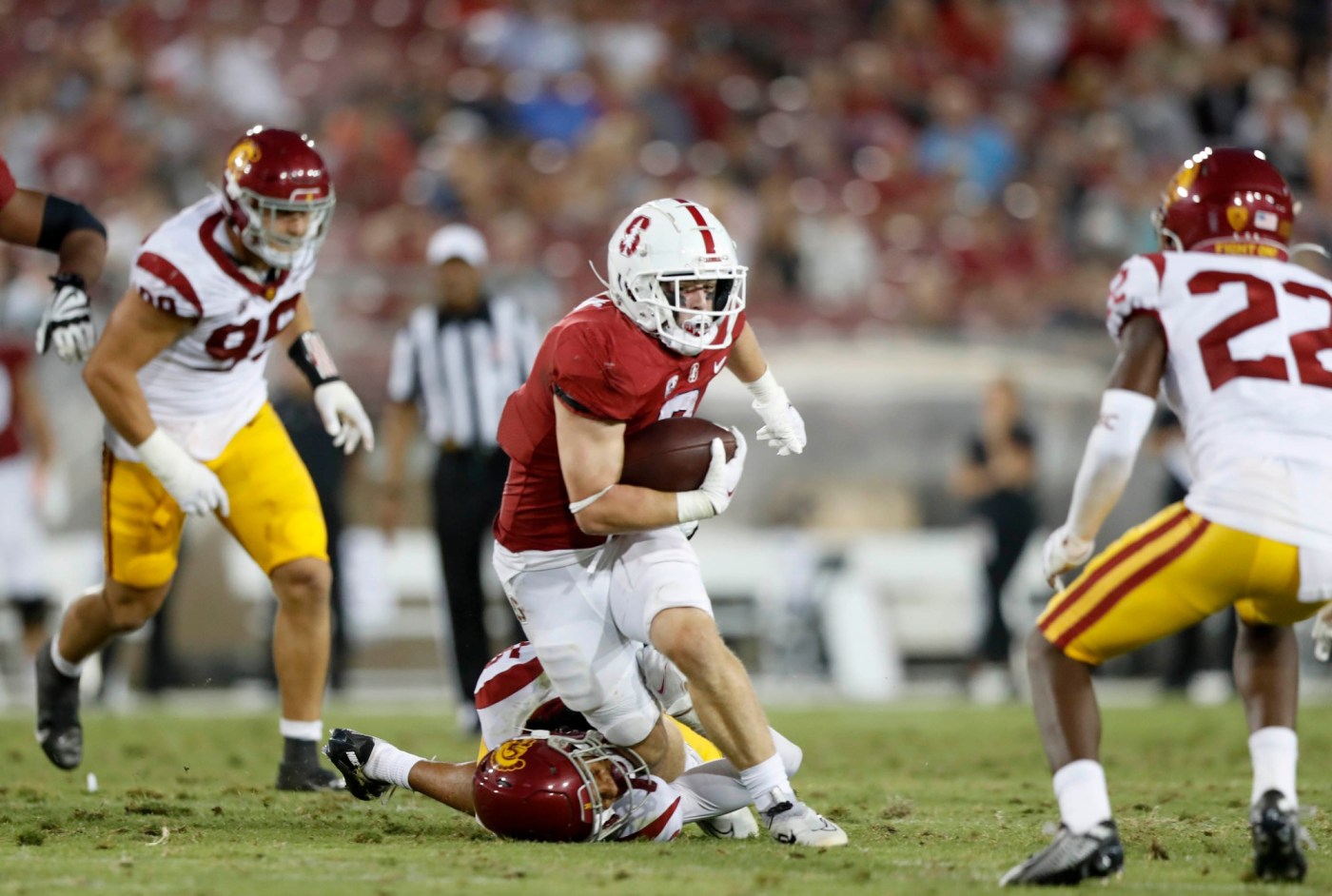 Stanford had 33 first downs in its last game, its most since 2007, but it lost to USC 41-28 because of a minus-4 turnover margin, including two giveaways inside the 5-yard line.

“We’re not that far off from where we need to be but we have to take care of the football,” Stanford coach David Shaw said.

Stanford (1-1, 0-1 Pac-12) has committed four turnovers against both Colgate and USC. That includes tipped passes and overthrows that led to three interceptions by Tanner McKee, three fumbles by running back E.J. Smith, and a fumble by punt returner Casey Filkins.

Meanwhile, the defense has just one takeaway, an interception against Colgate.

Shaw said that defenses force turnovers by either getting pressure on the quarterback and forcing errant throws, or from hustle and technique.

So while the offense is focused on protecting the ball, the defense is working on ripping at the ball in practice ahead of the showdown with the Huskies (3-0, 0-0).

“The game boils down to turnovers and explosive plays,” Shaw said this week. “(USC) won both those battles. If we can be even or be ahead in those two battles we’ll give ourselves a chance to win against anybody, but you can’t give that team that many opportunities.”

Smith, the Pac-12’s second-leading rusher at 103 yards per game, will miss the Washington game with an undisclosed injury. That means Filkins, a 5-foot-11, 198-pound junior, will make his first start.

After appearing primarily as a kick returner last year, Filkins has 22 carries for 97 yards and two TDs, plus four catches for 58 yards this season.

“Casey is a dynamic athlete,” Shaw said. “He ran the ball inside, ran the ball outside, caught some passes out of the backfield. He was a dominant football player coming out of Oregon so we’ve known this is a very versatile athlete. In conjunction with E.J., I really thought over time this is going to be one of the best running back combos in America. Casey’s only going to improve and get better and better.”

He will be backed up this week by junior Caleb Robinson and sophomore Brendon Barrow. The pair combined for seven carries for 25 yards in the season opener against Colgate.

Shaw is hopeful that Smith will return for next week’s game at Oregon.

Of course, turnovers weren’t the only issue for Stanford against USC. The Trojans scored touchdowns on their first five drives without even needing to convert a third down.

Senior inside linebacker Levani Damuni said that tackling in space was a big issue, so during the bye week, the defense emphasized tackling fundamentals such as wrapping up, driving your feet, and getting good leverage.

USC QB Caleb Williams was 20-of-27 passing for 341 yards, four TDs and no turnovers. Next up is UW QB Michael Penix, Jr., who has passed for 10 TDs (one shy of the national lead). He threw for 397 yards, the eighth-highest total in UW history, last week against Michigan State.

Penix went 12-5 as a starting QB at Indiana before transferring to Washington before spring practice in 2022, and has thrown for at least 337 yards in all three games with the Huskies.

“(He’s) a very explosive, athletic quarterback that can make all the throws,” Shaw said. “He’s got a big-time arm.”

Shaw said the best throw he’s seen this year was from Penix when the lefty rolled right and made a throw down the right sideline in the win over the Spartans.

After opening with two games at home, Stanford is about to embark on a difficult road trip to the Pacific Northwest, first with Washington and then next week at No. 15 Oregon.

The noise machine has been cranked up during practice to simulate playing at Husky Stadium, forcing the Cardinal to work on hand signals and other forms of non-verbal communication.

“I told the entire team it’s composure and communication,” Shaw said. “We can’t panic, we can’t be out of sorts.”

Stanford is 6-4 on the road over the past two seasons, including a 31-26 win in its last visit to Seattle in 2020, though that game was played in an empty stadium due to COVID-19 restrictions.