Gilts in freefall and sterling dives as Chancellor spooks investors

Five-year gilts are on course for a record one-day fall, with yields jumping 50 basis points, while two-year gilts look set to see their worst day of trading since 2009.

The mini-budget, which promised to bring an end to a ‘vicious cycle of stagnations’, also piled further pressure on sterling, with the pound falling to within touching distance of $1.10.

London-listed stocks, which had already started the day badly, fell further and the FTSE 100 and FTSE 250 were trading 1.5 and 1.2 per cent lower by late morning. 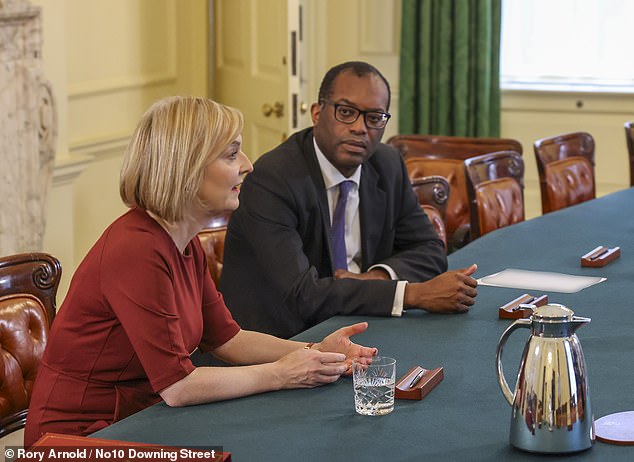 Liz Truss’ new Government, with Kwasi Kwarteng as Chancellor, has spooked investors with more than £70bn added to UK borrowing in the next financial year

The pound dives even lower to levels not seen since 1985

Gilt yields have soared in the last month as Britain’s economic prospects have worsened, with the 10-year having offered a yield of less than 1 per cent at the beginning of the year.

In simple terms, when a country borrows money it issues bonds, which global investors buy in exchange for regular and reliable income from the issuing nation. These periodic interest payments are called coupon payments.

The price of a bond has an inverse relationship to the yield paid. This means that when bonds are sold, their value goes down but the buyer is generally compensated with a bigger yield.

UK government bonds – gilts – are issued as two-year, five-year, 10-year and 30-year durations, which are the periods over which the debt will be repaid.

It will ring alarm bells at HM Treasury, as the cost of servicing the country’s debt balloons just as government borrowing soars and tax receipts fall.

Neil Wilson, chief market analyst at Markets.com, said: ‘Bond vigilantes were only ever biding their time.

‘The reaction in the bond market to the misnamed mini-Budget (it was anything but mini) is striking with yields surging after the Chancellor unveiled sweeping tax cuts that abandon any semblance of fiscal discipline.

‘The Chancellor, in his aim to stimulate growth and expand the supply side of the economy through tax incentives and reform, failed to outline any fiscal consolidation plans in the form of offsetting spending cuts.

‘In the absence of updated projections from the OBR, markets were left to assess whether the latest fiscal announcement would prove sustainable on their own.

Sam Benstead, collectives specialist at Interactive Investor agreed that while Kwarteng ‘did acknowledge that fiscal responsibility was important’, the Chancellor gave ‘no indication of this view in his mini-budget’ and has thereby spooked bond markets.

He added: ‘The yield on the 10-year gilt, which moves inversely to bond prices, has risen from 0.8 per cent to 3.8 per cent over the past 12 months, as bond investors worry about an increasingly indebted government that is trying to spend its way out of trouble, even as inflation runs near double digits.’

On Thursday the Bank of England opted to hike interest rates by 0.5 percentage points to 2.25 per cent, which having wrongfooted investors also led to a decline in sterling and gilts.

Markets indicate that investors now expect the Bank of England to hike rates to as much as 5 per cent in this cycle.

However, a worsening economic outlook and a growing negative perception in the eyes of investors could make this impossible.

Mohammed Kazmi, portfolio manager at Union Bancaire Privée, said: ‘Whilst the UK is suffering from an inflation problem, a poor growth outlook makes it unclear whether they will be able to hike to such an extent in the end, where we think such elevated pricing is also down to the repricing in rates observed elsewhere, rather than on UK fundamentals alone.

‘With the BoE providing limited guidance on future policy actions [yesterday], we would expect for gilts to remain volatile as we await incoming data.’

Why is the pound falling?

Sterling is currently sitting at a 37-year low against the US dollar, with all signs pointing to further pressure ahead as economic growth weakens and inflation soars.

Most global currencies have suffered against a particularly strong dollar in recent months, but there are other factors behind the pound’s decline.

The last week has been particularly tough on Britain’s currency, which has already been on a downwards trajectory since the beginning of the year.

In this respect, the pound’s decline demonstrates that investors are losing faith in the UK’s ability to demonstrate fiscal responsibility.

‘The UK budget proposals do not reflect the need and the realities of the UK economy, one that likely requires corporations to pay more so that higher revenue can come in to the government,’ explains Juan Perez, director of trading at Monex USA.

‘A lot of the growth in the UK could come from further debt at a time of deep recessionary pressures and the market is reacting swiftly.’

The Bank of England’s 50bps interest hike to 2.25 per cent on Thursday was also not enough to support sterling, having been overshadowed by concerns about the economy and an even more hawkish approach from the US Federal Reserve the previous day.